This is the worst "Kid Rock for Senate!" argument ever 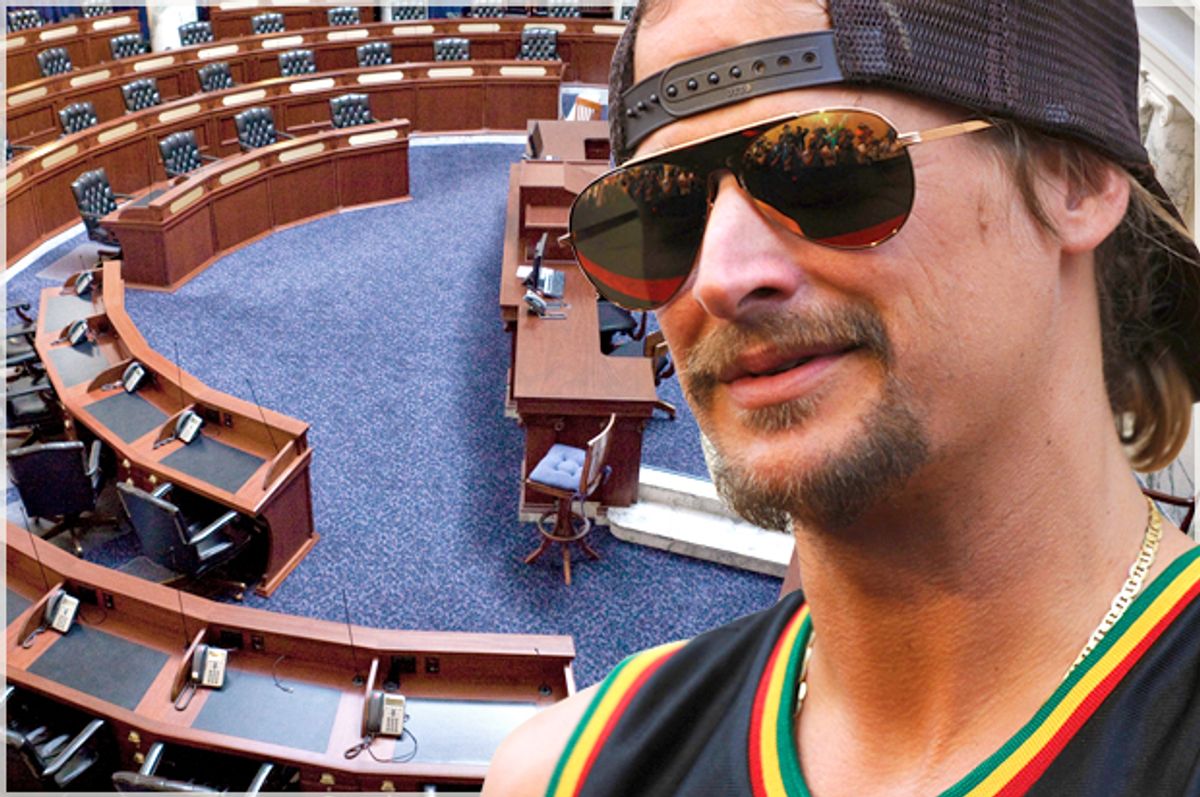 If the 2016 presidential election has taught us anything, it's that we probably shouldn't elect someone to national office just to anger liberals. It doesn't end well, as Trump voters, tired of seeing their president spend his days trolling Democrats and progressives and not getting anything done, are finding out.

That lesson hasn't been learned by Townhall columnist Kurt Schlichter, as he demonstrates in his new column, "We must elect Senator Kid Rock."

"No, we’re past voting for the ideology. Now we’re ready to vote for the id," Schlichter writes, pretty much admitting that he has no idea what the stances of Kid Rock — real name Robert James Ritchie — are on the big political issues of the day. But you know what electing Kid Rock to the Senate would do? It would make his "enemies" really angry!

Tell me more about how all Donald Trump has is raw opposition to everything Democrat, how he has no firm ideology of his own. Yeah, and so what? Raw opposition to our enemies sure as hell beats faked ideology that suddenly vanishes whenever it’s in danger of actually being implemented . . .

So just think of them seeing Kid Rock get the power and position they covet. We cannot waste this opportunity to watch them turn purple with fussy rage.

Considering that some of Trump's supporters are now rethinking their votes after realizing that he has become a do-nothing president, the idea that conservatives should throw caution to the wind on a stunt vote seems rather poorly timed.

Even Schlichter urged congressional Republicans to "get [their] act together" last week, even telling them to work on weekends. That article was published as Trump spent the weekend indulging in his weekend routine of traveling to one his golf courses. That weekend in particular, he watched others play the sport from a glass-enclosed case for more than an hour.

But I'm getting ahead of myself by asking "why should I vote for Kid Rock?" instead of evaluating Schlichter's actual question, which is something like are you going to vote for Kid Rock or not, you pussy?

This is a recurring theme in Schlichter's column: Manly men should vote for Ritchie if they want to be seen as manly men. He turns to the biggest manly man of all, President Donald Trump, to cement his argument.

To [Never Trumpers in the Republican Party], everything is Trump’s fault – their irrelevance, their dandruff, their inability to perform as men.

Schlichter's column is less about reasons Ritchie should run for office and more about why he hates the gatekeepers of conservative thought. He's acting like the teen who rebels against his parents — in this case, Bill Kristol and John Podhoretz — by becoming a rock star groupie.

I keep hearing how true conservatism will do this and that and blah blah blah. Yeah, most of the GOP senators are solid, but enough aren’t that you finger waggers need to lose the attitude. The people the establishment held up as serious policy wonks who put that alleged policy illiterate Donald Trump to shame turned around and stabbed us in the back.

Unfortunately Schlichter reveals that he didn't really do research on his subject. The crux of his argument seems to lean on facts that would melt away with just a bit of homework.

At least Trump – and Kid Rock – never lied to us about who they really are. . .

I’ll take Kid Rock in a heartbeat over what you’re selling – he’s a cowboy, baby, and he’s thrown a punch and taken one.

According to the Detroit Free Press, Kid Rock grew up in a "luxurious estate," complete with a "5,628-square-foot house" and an apple orchard, where Kid Ritchie picked apples. Then again, to compare a professional "cowboy" who grew up in suburban privilege, not "Redneck Paradise," to the dealmaker who can't make a deal seems rather fitting.