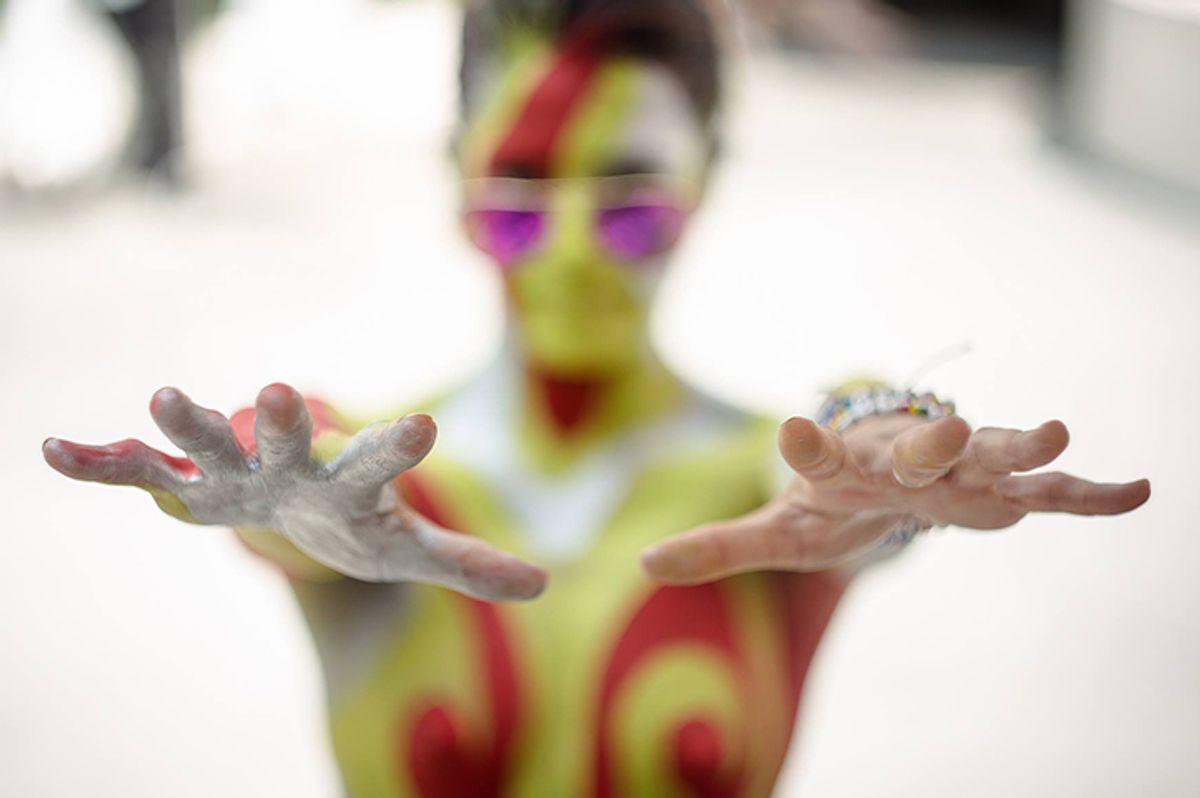 New York City's fourth annual Bodypainting Day takes place on Saturday, July 22, in Washington Square Park and features upwards of 40 artists and 50 fully nude models. The event is produced by Human Connection Arts, a nonprofit organization committed to building connections and acceptance through powerful communal art events. Body Notes, which acted as the launch event for the nonprofit, took place in June and featured more than 100 models, each with a unique message painted across his or her chest. Body Notes was inspired by the viral "Subway Therapy" project.

Bodypainting Day and Human Connection Arts founder Andy Golub began painting fully nude bodies in public in 2007 and founded Bodypainting Day in 2014. Since then other cities have jumped on board — Amsterdam, San Francisco, and most recently Berlin. I caught up Golub before the big day.

What is the goal of Bodypainting Day?

To be uplifting, to be creative, and to express ourselves and encourage others to express themselves in whatever way works for them.

The theme for the 2017 Bodypainting Day is “Humanity.” Why?

I think it’s a very difficult theme to paint if you take it literally. I want to encourage artists to find something more pure, more internal, maybe more abstract or representational. I’m curious to see what people come up with. It’s also part of the name of our new nonprofit, Human Connection Arts.

Discuss the transformation that occurs between the model and artist during a public painting session.

Everything keeps evolving; it’s like a journey. I think a lot of it has to do with the fact that I only freestyle, so I feed off of the model. The artist and model both have an inner voice that connects and communicates through the process and I believe we could use more of that in this world. I hope that Bodypainting Day encourages people to connect more.

What do you hope Bodypainting Day achieves in influencing the narrative of "nudity" in our culture?

The nudity part of it has grown. Partially because it’s such a big issue to people on both sides. But also, I’ve become more aware of how our bodies are fundamentally who we are. I think that if people keep seeing naked people, then it will continually become less of a big deal and people will be more accepting or maybe they won’t care that much about the status of the person who they’re talking to, but instead focus on who they are on the inside. There’s that "inside" thing again, going beyond the physical and connecting to what truly makes us who we are.

Why is it important to have artists and models of all shapes, sizes and specialties involved with Bodypainting Day?

What drives you to create?

The desire to make a positive impact on the world. Also, to continue to learn and grow.

Watch our above video coverage of Body Notes.