Boston nurses are bringing back the strike

1,200 nurses from Tufts Medical Center are walking out to protest pensions and safe staffing 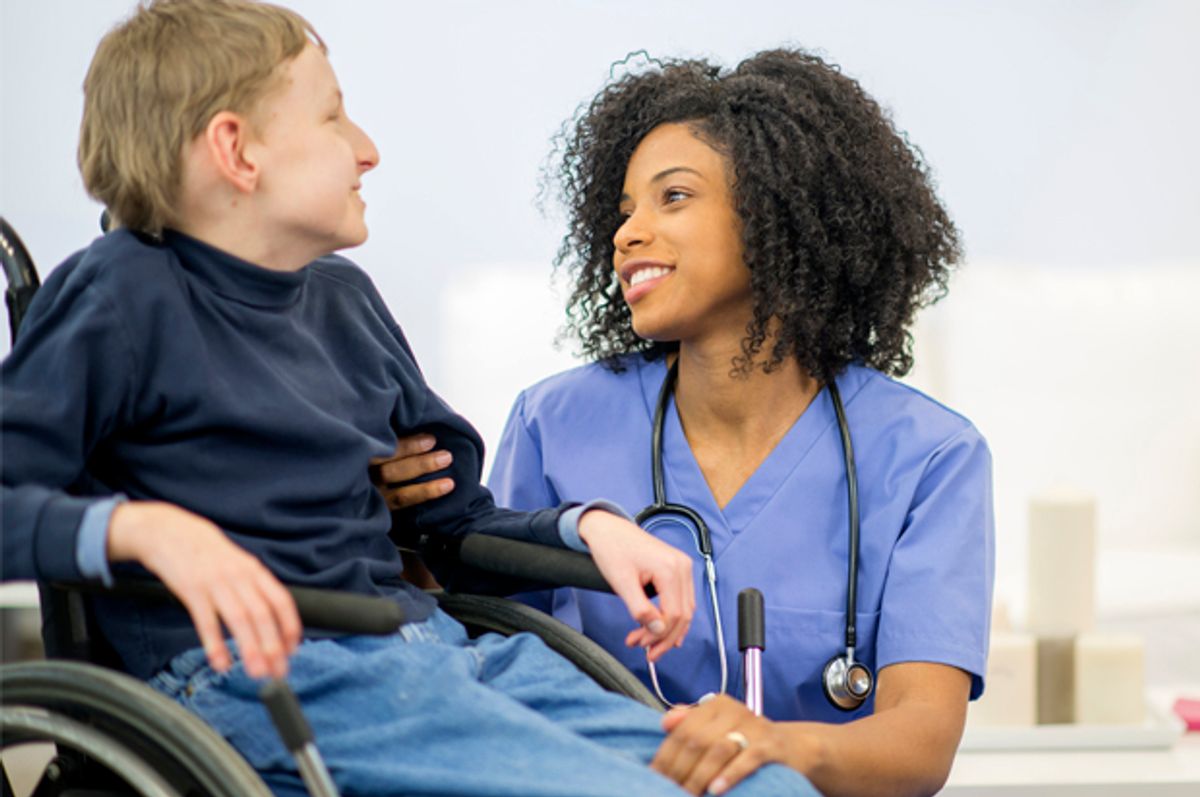 Tufts Medical Center nurses went back to work on Monday after launching the first Boston nurses’ strike in more than three decades — to demand better patient-safety protections and more competitive compensation. Despite the collective action, the roughly 1,200 nurses who walked out still face barriers to a satisfactory resolution.

On July 12, at least 1,200 Tufts nurses, represented by the Massachusetts Nurses Association (MNA) union, waged a one-day strike after more than 30 bargaining sessions with the hospital. Nurses in the bargaining unit told In These Times that major points of contention included pensions and safe staffing.

Tufts hired 320 U.S. Nursing Corp. temporary nurses, a travel nurse staffing agency based in Colorado, to fill in. Rhonda Mann, director of communications for Tufts, said in a statement, "The nurse staffing company that provides replacements required Tufts to guarantee those nurses with five days of work.”

This claim was used to justify management’s four-day lockout of nurses.

Beth Taglieri, 41, has been a Neonatal Intensive Care Unit (NICU) nurse for 18 years, including four at Tufts. She told In These Times that she was concerned about leaving her patients with agency nurses during the strike. "They don't know our system, and it's hard to know how they will treat your patients,” she said.

According to Taglieri, the union has negotiated with the hospital administration in the past, but the two sides were too far apart this time.

The union cites lower starting wages and poor pension plans as the key barriers to Tufts’ retention of nurses after they are trained. Tufts nurses make between $32.50-$63.00 per hour, depending on experience. In contrast, top-tier nurses at Boston’s highest paying hospital make $70.27.

The nurses recommended a multi-employer benefit plan that they say could save Tufts $96 million to spend on staffing and pensions. But the hospital rejected this proposal, claiming it would be more expensive.

Taglieri argues that improvements to pensions and wages would ultimately benefit the hospital. "We get that it's expensive to run a hospital. We're not blind to that,” she underscored. “But we've been seeing more turnover. We need to provide enough nurses for the patients we care for. If a mom comes in and delivers a baby three months early in an emergency, we need to be prepared.”

Mann denied that Tufts has had high turnover rates over the past two years, telling In These Times, “Absolutely not. Our retention rate for nurses is 94 percent…one of the highest in the country.”

Wages and pensions were not the only points of contention. The union had pitched a proposal that the hospital maintain a ratio of one nurse to one patient to comply with a 2014 Massachusetts law for safe staffing of intensive care units, which limits scheduling ICU nurses to one or two patients, depending on their severity.

Jennifer Johnson, spokesperson for the MNA, told In These Times, "It became apparent it’s hard to achieve because of expense. They withdrew that proposal, and the union made a major concession with that. What we asked for instead was additional resources, and improvements for charge nurses."

Anne Asci, 56, has been employed at Tufts for 36 years as an intravenous transfusion (IV) nurse. She works with oncology patients with hard-to-reach veins and outpatients who just need someone to remove their IVs before going home.

Other nurses said that once there were 10 to 12 IV nurses on a floor at Tufts, but now there are only a handful, and none overnight. To relieve staffing issues, Tufts proposed increasing charge nurse hours in medical and surgical units from 32 to 52 hours a week.

Tufts’ argument is that money is tight. According to an online post from chief nursing Officer Terry Hudson-Jinks, the hospital is recovering from a $15 million loss in fiscal year 2015.

Yet, Taglieri insists the hospital can do better. "We do have pretty good staffing within the NICU. It's the adult side where we have concerns,” she said. “We don't have a lot of room to absorb new admissions. For instance, we've had five or six admissions in 12 hours, but if each nurse has patients, who will care for the emergency patients in labor? Other hospitals have more of a cushion."

Some patients backed the nurses’ collective action. In 2010, Shannon Kitterick Deibel’s son Brody was transported to Tufts with a blockage in his intestines when he was only a few months old. She and her husband were waiting to hear about a surgery when a nurse stopped into their room. "That's when we met our nurse and hero, Ann Marie. She made my husband I feel like it was going to be ok." Brody underwent a nine-hour surgery days later to fix his intestines, and stayed in the hospital for a month.

Describing her son's release from surgery on a ventilator, Diebel said, "The nurse took my hand and held it like it was her own child. Everyone in that unit was not there to just make a paycheck, but to impact another life.”

When asked about her feelings toward the nurses in light of the strike, Diebel replied: "I love them."