A bizarre encounter with an angry, paranoid border agent gives us a taste of what we missed living abroad 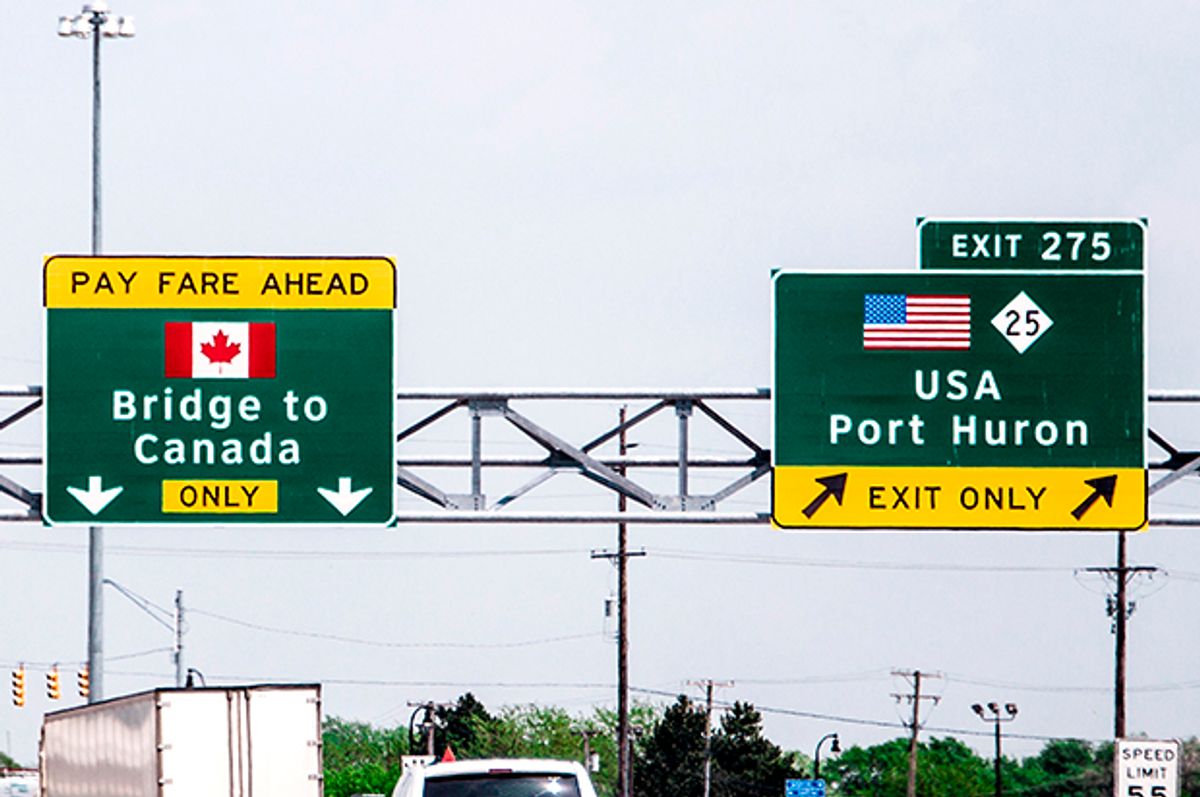 After an endless stream of Tim Hortons restaurants and the coniferous glacier-ironed Canadian lands that seem to exist only to separate them, our car finally eased into line at the U.S. Customs and Border Protection checkpoint at Detroit, idling alongside other freedom-yearning automobiles queued before the heavily guarded passage, a brilliant orange smog-sky lit by the ambient neon of downtown Motor City.

My friend Elijah and his buddy Carl drove from Louisville, Kentucky, to Toronto International airport to ferry my girlfriend, our cat and me back to the United States after we spent nearly a year in the United Kingdom. I’d read with some trepidation the Supreme Court’s partial upholding of President Trump’s travel ban less than 24 hours prior, but I took bizarre comfort in the fact that, despite the dystopian nightmare set to unfold for Muslims without friends or family in the U.S., we, as white American citizens, would have little trouble coming back home.

If anything, my biggest worry was the cat: a fat, snow-colored beast whose tagging-along on various international border crossings caused far more headaches than any human-related red tape ever did. In an age of international terrorism, rabies remains a big concern for many countries. Such was my security in my own privilege — I wasn’t worried about a state-sponsored proctology exam or the assailing of any supposedly inalienable rights, just cat hassles.

But while I was ultimately proven right about how being white Americans would be enough to get us through to Michigan, the ideological litmus test imposed on us by our border agent was a disturbing reminder that the country I’d left wasn’t exactly the same one I was returning to.

We pulled up to the open-air checkpoint booth. The border agent — clad entirely in black body armor and sporting a pair of cop shades wholly unnecessary for the purple-and-amber sunset — swiveled in his chair to face us.

Elijah handed over his passport, but the guard was nonplussed.

Simple enough; we did as ordered.

“I wasn’t familiar with the protocol,” Elijah said.

The guard began to interrogate Elijah about our relationships to one another. I jumped in to try to explain how we’re all connected, and the agent quickly shut me down.

“I’m not talking to you,” he said. “I’m talking to the driver. Keep quiet until I ask you a direct question.”

I complied. The agent collected our passports in silence and placed them somewhere out of sight inside of his booth. Why isn't he looking at them, I wondered. Was there some kind of hold-up? My pulse quickened; sweat pushed through my pores.

With his black-gloved hands clasped atop his lap, the agent swiveled his stool around to face us and launched into an unsolicited primer on the ills facing our nation, borders and new president.

"I've been a cop for all my life," he started. "I joined the border after the 9/11 terrorist attacks."

So began a bizarre and angry tirade more informed by the likes of Breitbart and the Facebook Fake News brigades than bureaucratic best practices: He railed against liberals, whom the agent accused of trying to undermine our president and who beat up his supporters without any reason; an activist liberal professor who failed his kid over a pro-Trump essay; and an entire religion, Islam, which he said is dedicated to killing those who uphold Western society. America, it was clear, has enemies both abroad and at home.

The agent paused. We thought he was done.

At first, the question seemed rhetorical. He leaned in toward Elijah's open window to get a better look at the four of us.

"Yes," Elijah said, breaking the silence. "It's a, uh, really terrible, what they're doing to us."

The rest of us nodded in agreement, acquiescing to his repugnant alt-right bullet points. We were starting to realize that our travel documents might not be enough to get us back into the U.S. Maybe this wasn't just one paranoid government agent's screed against enemies, foreign and domestic; maybe it was a litmus test we'd have to pass, or else.

I thought of grainy footage of the McCarthy hearings, how much better they'd have looked in HD. Would Elijah, with his thick-framed glasses and mussed hair, appear every bit the Red he is in 4K resolution vs. black-and-white?

I resisted the urge to exchange eye-rolls with my companions and swallowed a groan. To do either under the scrutiny of the agent’s all-seeing, all-American, reflective shades felt like it could become grounds for tossing Elijah's car, or worse. I looked straight ahead at the off-ramp, which now seemed very far away.

“We’re under attack,” the agent told us. “Our values, our way of life. These people want us dead.”

We nodded and smiled. I felt especially nervous about my abridged copy of Karl Marx’s “Das Kapital” in the floorboard; had the agent decided to toss our car, such leftist literature would’ve contracted our political alignment. (I hastily prepared a “know thine enemy” alibi just in case.)

When it came time for him to interrogate my girlfriend about the nature of our 11 months in the United Kingdom, he was bemused at her response.

“I received a scholarship to study at Cardiff University,” she said.

“And what were you studying?” he asked.

“A journalist,” he said, perking up. “So are you one of these fake news people?”

“There's a lot of fake news going around,” he said. “If you're not careful, you'll start believing that we're the bad guys.”

We offered another round of acquiescent nods as the agent went right into another rant. This time, he laid bare a disturbing rationale now made legal by the highest court in the land, and aided largely by that court’s liberal justices.

“You see, America is a free country,” he began. “We’re an inclusive country. We have to be careful, but we are still a welcoming nation. People of all kinds are welcome to come here: White or black or brown, Christian or Jew . . . ”

We sat there, nodding and waiting for the conclusion of that thought. That ellipsis in the above quote is important for a couple of reasons: One, because of the seemingly deliberate omission of a certain major world religion from his list of acceptable American religiosity; and two, because, as we learned, he wasn’t finished.

“... but Islam… Islam is a different story,” he concluded. “They don’t know how to get along with us. They can’t be trusted. So we can’t welcome them, you know? Not until they learn how to get along.”

After his conclusion, the agent pointed right at the plastic cage on my lap.

“You, this whole time, I’ve noticed that you have a cat with you,” he said. “I assume you have some paperwork for it that I need to see, so why don’t you hand that over to me right now.”

I did as commanded, grabbing the requested files from the floorboard next to the Marx, and handed them over, hoping that they hadn’t invalidated themselves via osmosis with the commie tome.

In all, our encounter lasted about 10 minutes. But the implications stuck with me: If we had entered this guard’s personal fiefdom with the wrong skin tone, the wrong accent, the wrong country of origin, the wrong last name, or the wrong religious affiliation, what might have happened?

And, further, for those who do check the “wrong” boxes in the hands of an officer like this, who feels they are guilty of having the wrong skin, being from the wrong country, bearing the wrong last name, worshipping the wrong god, what is happening to them?

Jonathan Meador is a writer who has worked for National Public Radio, the Nashville Scene, and the Louisville Eccentric Observer, among others. He currently resides in Springfield, Illinois.