Help us Bernie Sanders, you’re our only hope: Why the beloved progressive should start a labor party 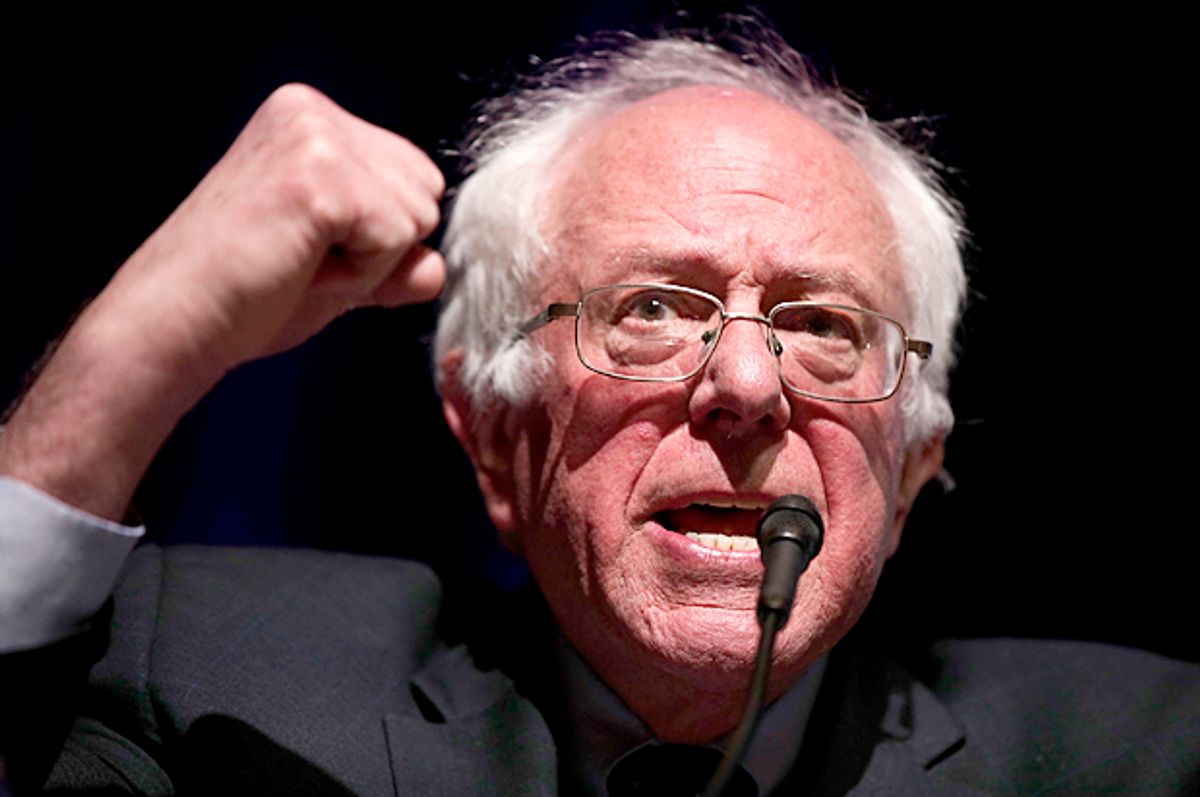 Poor Bernie Sanders. He’s by far the most popular politician in the United States — more so than the president by a long shot — and yet, at 75, he’s likely too old to run for president again. Polls show that, compared to Democrats' or Republicans’ platforms, Americans overwhelmingly prefer Sanders’ policy proposals, and yet the Democratic Party, with whom the independent senator from Vermont caucuses, won’t explicitly profess its support for any of them. Sanders’ frenemies in the Democratic Party refuse to learn any lessons from his popularity. Instead of adopting some of the septuagenarian's ever-popular rhetoric, the Democrats have turned their backs on him, promoting a big donor–approved platform characterized by ideologically vacant opposition. Anti-Trump yet pro-nothing.

So as the de facto leader of the American left, reviled by his cousins in the Democratic Party, what’s a democratic socialist to do?

Just as Barack Obama founded the political group Organizing for Action to help push his platform, Sanders founded a political organizing group in 2016, dubbed Our Revolution, an attempt to redirect his supporters’ energy toward other candidates and issues that Sanders himself believed in. Yet Our Revolution has struggled to maintain the incredible organizing power of the Sanders campaign; shortly after its founding, the nonprofit suffered from internal turmoil, including a staff revolt in which half the senior staff quit. And of the 45 candidates in local races and special elections that Our Revolution has supported so far in 2017, 29 lost their races — many of whom were candidates going up against “mainstream” Democrats supported by the party, including progressive congressman Keith Ellison’s bid for Democratic National Committee chair, which he lost to entrenched insider and former Labor Secretary Tom Perez.

Yet while the slate of candidates supported by Sanders’ PAC have always been left-of-mainstream progressive Democrats, they have often faced precisely the same demons that Sanders faced in the primary: namely, the battle between entrenched Democratic Party interests and the more populist progressivism of Sanders. Lest you forget, Sanders is not a Democrat. Establishment Democrats are still quite wary of him, and there is ample evidence that party brass conspired against him during the primary in order to ensure Hillary Clinton would win the nomination.

This puts Sanders in a tough position: He will keep fighting for his progressive vision via the only (currently existing) political body that can bring it about — the Democratic Party — while the Democratic Party will keep resisting. Many critics, myself included, believe that the Democratic Party has reached a terminal point where it is no longer fundamentally capable of reorganizing itself in any way that would make it resemble a (little-d) democratic or progressive party. This is not because the party is “corrupt” in a legal sense, per se, but rather because it has ceased to respond to populist will, and instead responds to the will of the business class.

In other words, to understand what the Democrats have become, follow the money. The Democrats largely rely on donations from wealthy supporters whose interests are fundamentally at odds with the vast majority of the nation. As a result, it has become a mutant party that supports socially liberal policies that don’t cut into corporate profits or fundamentally alter the vastly unequal distribution of wealth in the United States. In other words, no redistributive economics like what Sanders champions, for that would cut into the pocketbooks of the rich upon whose teats the party brass suckles, and who more or less dictate policy. The working class sees nothing in the Democratic Party. It has, in other words, gone full neoliberal.

This is a toxic and terrible rut to fall into, and it’s partly why the Democratic Party lost all four special elections so far this year, and has lost over 1,000 legislative seats around the country since 2008. (The other reason is, of course, gerrymandering and voter suppression on the part of the GOP. You might argue this becomes a cyclical trap: as more Democrats lose, Republicans get elected and then gerrymander and suppress the vote, further dampening the Democrats’ ability to win.) One recent Washington Post-ABC News poll suggested that a majority of people think the Democratic Party stands for nothing except being anti-Trump. And yet party brass refuses to right the boat. As Sanders himself wryly commented in a recent New York Time Magazine interview:

Certainly there are some people in the Democratic Party who want to maintain the status quo. They would rather go down with the Titanic so long as they have first-class seats.

If you believe, as I do, that the Democrats are permanently trapped in the hollow, toxic rut of neoliberalism, the question remains: What are progressives and lefties supposed to do now?

There is one possibility. It’s controversial, historically tricky, and essentially a moonshot — but if we’re stuck as we are, it’s worth trying. Senator Sanders could start a Labor Party.

I should immediately note that this almost never works. The last presidential candidate to win as a third-party candidate was Abraham Lincoln, though there are indeed many third-party lawmakers scattered throughout statehouses and city councils in the United States. Still, there is a decent chance that if such a party were led by Bernie Sanders, it might have a chance at electing some truly progressive candidates in the United States under his banner.

There’s a perfect storm brewing that makes a Sanders-led Labor Party possible. First, he's the most popular politician in the U.S.; his adroit small-donor fundraising and movement-building skills stunned both establishment parties, which had generally been reliant on big money, proving that a populist movement can organize and fundraise on par with a big-ticket candidate like Clinton; the two main political parties in the United States are uniquely loathed at this moment in history; and lastly, half of eligible voters have ceased voting, and many of those voters feel neither party represents them. The current political calculus suggests that a Labor Party voice might uniquely capture their votes.

This last point is the most salient, and the most complex to unravel. Sanders’ popularity took Clinton and her cohort completely by surprise: Sanders excited voters who might not have voted otherwise, and even many who would later go on to vote for Trump, yet who found Sanders’ policies connected uniquely with them. This is to re-emphasize a point that Jeremy Corbyn made in the United Kingdom recently: when candidates move left, they win.

This is counterintuitive to the Democratic Party brass, who are cautiously supporting center-left candidates like John Ossoff. Yet as Ossoff’s loss suggests, by moving to the center and running candidates without strong positions, the Democrats lose their abilities to differentiate themselves from their opponents. What made Sanders and Corbyn both so successful in capturing votes as outsiders was that their rhetoric actually sold a real vision of the future that was connected to the everyday lived experience of the body politic. As opposed to Trump’s despotic visions of the United States as a bleak hellscape — or Clinton’s do-nothing neoliberalism defined solely in its opposition to Trump — Corbyn and Sanders offered real, tangible visions for a future, and a positive future, too.

Many political scientists will balk at this proposition. Third parties are astonishingly difficult to get off the ground and turn into mainstream forces in national politics. “There's a huge poli sci literature that argues, correctly, that a two-party system is built into our structures of government and public opinion and has been for almost two centuries,” Michael Kazin, a professor of history at Georgetown University and the editor of Dissent magazine, told Salon in an email.

This is not to say that third parties are inherently spoilers or fool’s errands. “Third parties have been important in pushing the major parties in the past,” Kazin added, pointing to “the Populists of the 1890s, the Progs of 1924, the Socialists in the Progressive Era at the local and state level, the American Independent Party in 1968, and the Perot's Reform Party in 1992, to a degree.” Hence, even a Sanders-backed Labor Party that existed for only a short period of time might move the Democratic Party to a more leftward position, where they are more situated to win elections. Though it may also not work, given that Sanders’ popularity, the popularity of his policy positions, massive electoral losses over the past few years, and the fact that much of the United States loathes them has had little impact on Democrats’ policy positions.

Political tacticians from the left side of the aisle might argue that a third party would become a spoiler party in certain races. Yet evidence from the past 50 years of electoral politics suggests the opposite. The Democrats have stopped even running candidates in many smaller elections in red states, where a third-party candidate who spoke to working-class needs could potentially win. Likewise, there is ample evidence that a Labor Party candidate, with a progressive slate akin to Sanders or Corbyn, might actually steal as many votes from those who might cast their ballots for Republicans. Exit polls from red states attest to this.

With the momentum of the most popular politician in the country, an avowed democratic socialist who has amassed a huge following and widespread national support, we could have a single opportunity to build a real third party running progressive and democratic socialist candidates across the United States. Without the burden of the Democratic Party trying to stop their rise, they could win and fight for universally beloved social programs, like single-payer health care, that are too dangerous for the neoliberal Democratic Party to get behind. Yet it probably wouldn’t work without Sanders; there are already a few existing Labor Parties in the United States, none of which have much traction, nor big-name stars attached.

What will Mr. Sanders’ legacy be? Will his nonprofit Our Revolution continue to promote progressive candidates that the main Democratic machine fights hard against at the behest of their richest donors? Or will Sanders build on his momentum to create a third party that could fundamentally change American politics forever?