Are Democrats turning to an alliance between neocons and neoliberals? If so, it's a terrible strategy

An alliance with Bush-era neocons on the Russia scandal is pushing Democrats hard right on foreign policy. Sad! 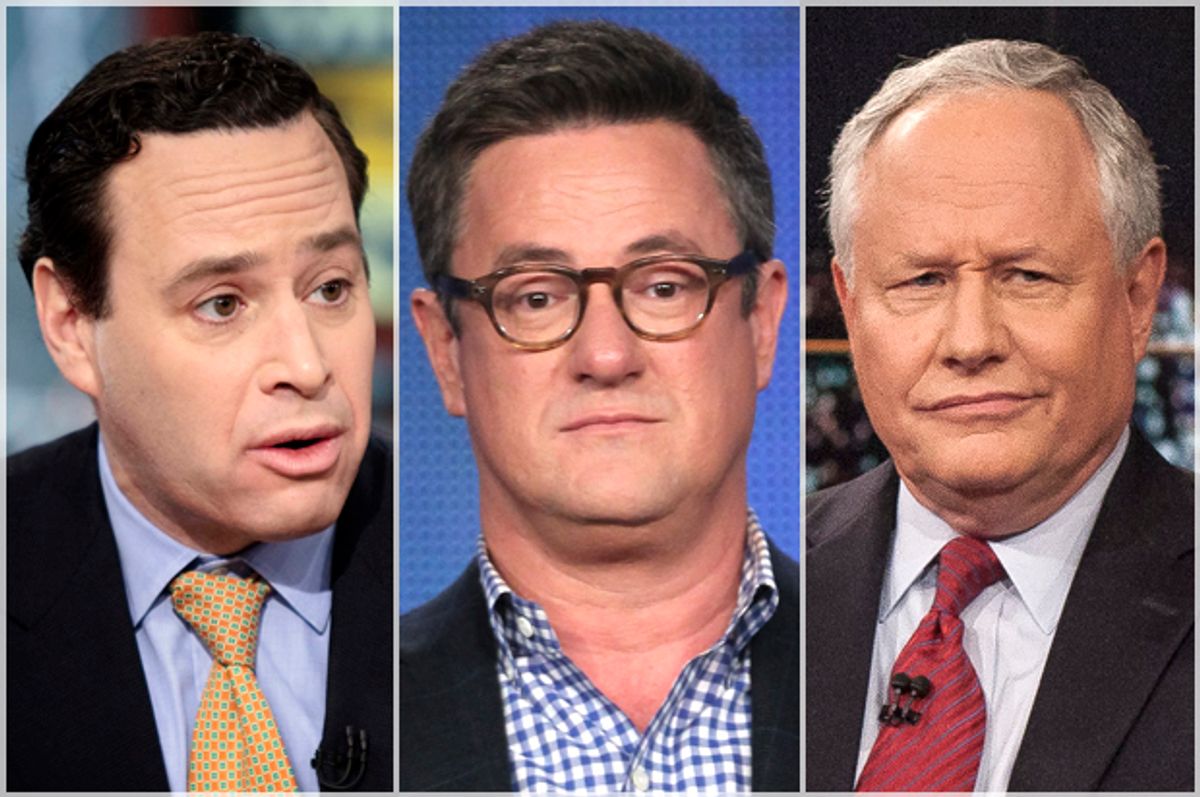 Last week, former Republican congressman and MSNBC host Joe Scarborough made headlines when he announced on “The Late Show With Stephen Colbert” that he was leaving the Republican Party. A week later the conservative pundit wrote a column for the Washington Post elaborating on his decision.

“I did not leave the Republican Party. The Republican Party left its senses,” explained Scarborough. “President Trump’s Republicans have devolved into a party without a cause, dominated by a leader hopelessly ill-informed about the basics of conservatism, U.S. history and the Constitution.”

“Neither Lincoln, William Buckley nor Ronald Reagan would recognize this movement,” the former congressman continued. “It is a dying party that I can no longer defend.”

Scarborough’s criticism of his former party is more than a little ironic, considering he was a frequent apologist for Trump throughout the campaign season, but the host has nevertheless been praised by many Democrats for his “principled” decision to “put his country first.” Though it has already been a year since the Republican Party officially embraced Trump by nominating him as their candidate, it is, as they say, better late than never.

Scarborough is just one of many conservative pundits who have garnered liberal adulation for rejecting the unhinged Republican president. Since Trump was elected president last year a who’s-who of top conservative figures have been embraced by Democrats and the “liberal media” for their opposition to Trump and his reactionary brand of populism.

Indeed, though he has divided the country, President Trump has been a great unifier of neoliberal Democrats and neoconservative Republicans, who have come to see Russian plots against America at every turn. Neocons like Max Boot, David Frum, Bret Stephens and Bill Kristol are among the top Republican hawks who have become liberal darlings in the Trump era. Frum, the former George W. Bush speechwriter and coiner of the infamous phrase “axis of evil,” has become many liberals’ favorite neocon pundit on social media, while Stephens — a prominent climate-change denier — was hired earlier this year as a full-time columnist for the ostensibly liberal New York Times editorial page (not surprisingly, the Times was forced to issue a correction for his debut column defending climate-change skepticism).

At the center of this alliance is not just a mutual antipathy for President Trump but a hostility towards Russia that recalls the paranoid years of the Cold War. Last week this hawkish alliance was made official when a new “bipartisan” group called Alliance for Securing Democracy was formed. This new advocacy group will be led by Laura Rosenberger, a former State Department official in the Obama administration, and Jamie Fly, a former national security adviser to Sen. Marco Rubio. Top Obama-era officials and Bush-era neocons will sit on the board of directors, including Clinton adviser Jake Sullivan, former ambassador to Russia Mike McFaul, Bush-era Homeland Security Secretary Mike Chertoff and none other than Bill Kristol, America’s leading chicken-hawk (who is known best for how wrong he has been in nearly all of his predictions).

Glenn Greenwald summed up this new Trump era alliance in a recent article on The Intercept, noting that “on the key foreign policy controversies, there is now little to no daylight between leading Democratic Party foreign policy gurus and the Bush-era neocons who had wallowed in disgrace following the debacle of Iraq and the broader abuses of the war on terror.”

The Democratic establishment’s apparent shift to the right on foreign policy, along with its newly formed alliance with Republican hawks, is part of an overall trend that reveals how out of touch the party elite have become with the base. Indeed, while leading Democrats have adopted a Cold Warrior mentality, the party’s base has actually shifted further to the left. A majority of Democrats today, for example, have a favorable opinion of “socialism” and support  progressive policies like universal health care. This makes it all the more ironic — and maddening — that senior figures in the Democratic Party have started to sound more like heirs of Joseph McCarthy than Franklin D. Roosevelt, as displayed by a recent tweet from former DNC chair Donna Brazile declaring that “the Communists [i.e. Russians] are now dictating the terms of the debate.”

In a Bloomberg poll released last week, it was revealed that Hillary Clinton is even more unpopular today than the historically unpopular President Trump. According to Bloomberg, many Clinton voters said they “wished Senator Bernie Sanders of Vermont had won the Democratic nomination, or that they never liked Clinton and only voted for her because she was the lesser of two bad choices.” The survey had another interesting find: of the many issues facing America, 35 percent of people consider health care to be the most important, followed by issues like immigration, terrorism, and climate change. Only 6 percent of respondents said that the United States’ “relationship with Russia” is the most important issue facing the country.

These findings indicate two things: First, that most Americans care much less about the Russia scandal than the political establishment does; and second, that Clinton’s brand of neoliberalism is politically toxic. In that light, the Democratic establishment’s current strategy of embracing the center and aligning with neoconservatives to “secure democracy” against Russia is reckless and extremely shortsighted. ​​​​​​​The Republican Party “left its senses” long before Trump came around, and in uniting with Republican chicken-hawks, leading Democrats seem to be leaving their senses too.