On "Game of Thrones," male virgins make the best lovers

The HBO series doesn't offer many positive portrayals of sex — but when it does, it's a little . . . odd 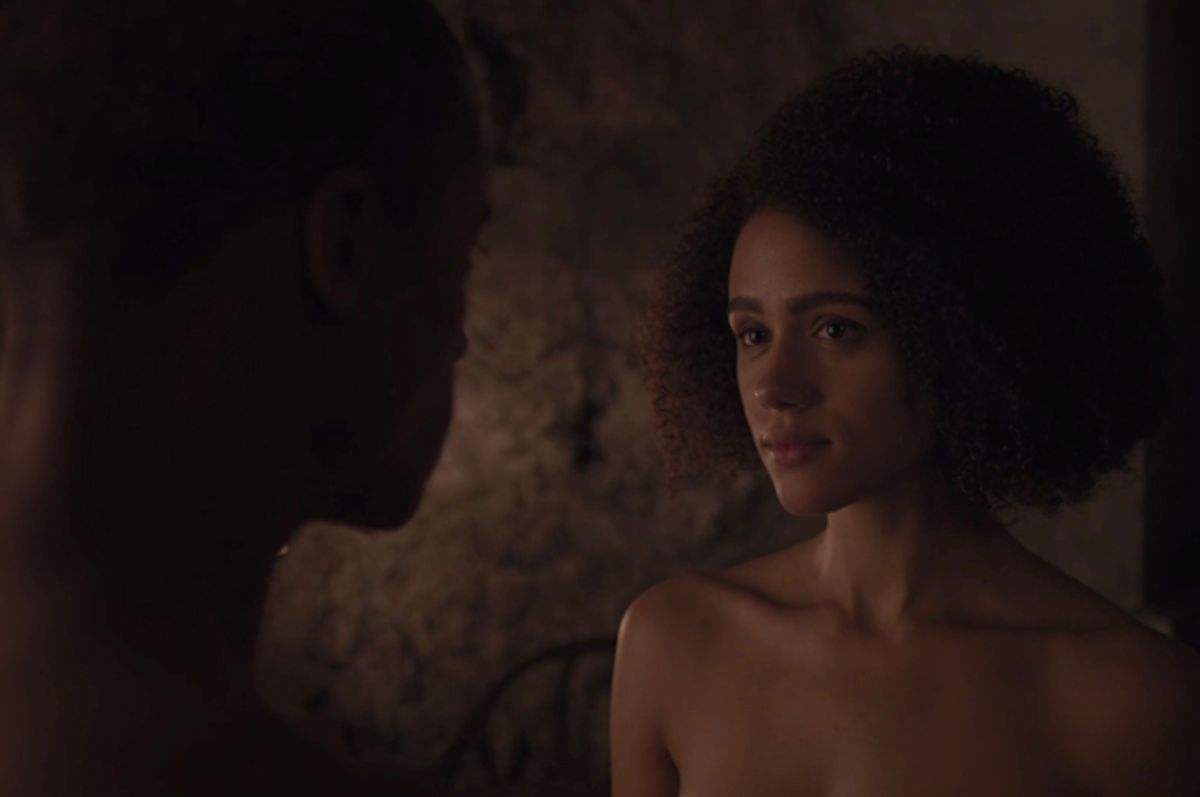 So, minor spoiler for last Sunday night's episode of "Game of Thrones": Grey Worm and Missandei finally, totally do it.

The two formerly enslaved secondary characters had been very, very close to actual intimacy before, but last night Grey Worm finally dropped his apprehensions about the fact that he's, well, a eunuch, and got down to business with the understanding Missandei.

In all truth, their scene together — featuring soft music and candlelight — was perhaps the most touching, romantic and positive representation of sex the series has ever had — and by leagues the most feminist.

Look, it's very beautiful that these two characters who have long cared for each other finally got real. But let's remember that Grey Worm is a virgin to this stuff (perhaps Missandei as well). While it's a positive and empowering thing that she — ahem — got off, it's also a bit odd. These things don't normally happen your first time out.

Indeed, if you look at the series, a lot of virgins do quite well their first time at bat. Jon Snow was equitable with Ygritte (it was awkward and hesitant at first, but still damn good). Robb Stark was solid and confident with Talisa despite no experience. Perhaps this kind of well-coordinated grappling and satisfying orgasms were your experience the first time you did the deed, but that's not the case for most humans on this planet.

This provided somewhat of a disconnect for many viewers.

And that reveals another thing in the much-talked-about, very problematic world of sex in "Game of Thrones." These three couplings above — ones that all involve idealized versions of men's first times — are among the only truly positive, tender examples of sex in the whole series.

Yes, we could throw in the various examples of professionals having a good time — Shae, Ros, etc. — but there's always a game being played there (most of which end up in death). We could talk about Daenerys and Drogo, but that relationship began with arguably non-consensual sex. We could talk about Renly and Loras, but that was a hidden shame for both (and perhaps a partially political move on Loras' part). Daenerys' affair with Daario is enjoyable but problematic for both. We could talk about Oberyn and Ellaria, but they, again, called upon professionals to get their rocks off and were treated by the show as kinky, kinky weirdos.

Really, when you push away all the relationships with various issues, complications, incest or power plays, the only examples of onscreen sex portrayed as truly tender, loving and romantic on "Game of Thrones" involve a virgin man, soft lighting and a more or less satisfied woman.

We should also mention Sam and Gilly, a less idealized, more honest portrayal of a virgin man's experience — though one that comes with a certain amount of baggage as Gilly seemed to be pairing with Sam partially because she genuinely cares for him, partially because she needed a protector. Overall, that whole relationship, tender as it is in parts, is sometimes played for laughs — the joke being that Sam is fat (D.B. Weiss and David Benioff are not noted for their inclusive takes on body types).

Tommen and Margaery also fall into this more honest look at male virginity, but the less said about that very, very creepy situation the better.

Honestly, it's not clear what we should make of this. It's not clear that there's anything to make of this. Still, it seems to be a trend — one that, in the context of so much non-consensual sex and intimacy played solely for sensational thrills in a series created by two very dude-ish bros. It's probably misogynistic and tied to false ideas of male potency and even worse notions about how female orgasms actually work. Maybe it's not. Either way, it's odd and probably worth pondering.

Also, did you notice something else about our three loving, awesome-sex having couples? That's right: Ygritte, Jon, Robb and Talisa all died pretty horrible deaths (granted, Jon got over it). Good luck Grey Worm and Missandei!