"Game of Thrones" recap: "Stormborn" demonstrates that might is usually right

Despite efforts to seize power peacefully, sometimes fire and blood are inevitable 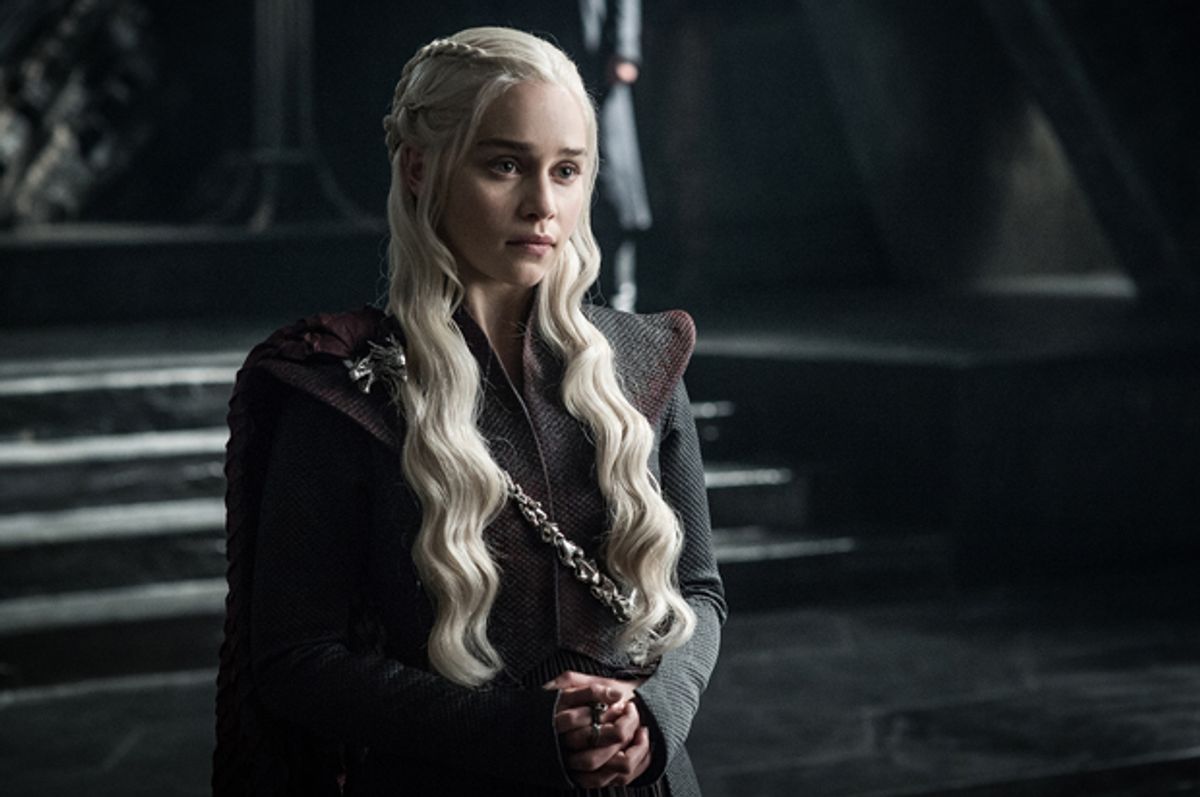 The small people in "Game of Thrones" rarely receive justice. That’s a truth you can take to the Iron Bank. So whenever someone talks about doing right by the commoners of Westeros, especially by avoiding armed conflict and minimizing bloodshed, count on those efforts amounting to naught.

The second episode of this seventh season demonstrates this with stunning symmetry, beginning with Daenerys (Emilia Clarke) and her allies discussing their opening moves in the war to take the Iron Throne, and closing with half their strategy blasted and sliced to ruin. One does not bring dragons to Westeros if she isn’t prepared to use them — especially if one is toe to toe with Cersei Lannister (Lena Headey).

Sunday’s episode, “Stormborn,” displayed a number of the challenges the series faces within a shorter timeframe than previous seasons. There are still too many characters who feel more transactional than necessary, and loose ends abound. Plus, audiences are running out of patience for unnecessary departures from the core plots.

However, if one of those lacy details answers an important question such as, “whatever happened to that lost Stark direwolf Nymeria?” or “What’s lurking underneath all those greyscale scabs on Ser Jorah’s (Iain Glen) torso?”,  we may be willing to put up with it.

Well, maybe we didn't need director Mark Mylod to answer the Ser Jorah question. But he did anyway with a gruesome, appetite-obliterating sequence of tight shots as Samwell Tarly (John Bradley-West) operates on the knight. Here, the answer is pus – lots and lots of pus. Pus that looks like the innards of a burnt savory pub pastry, which Mylod featured in a smash cut as a transition between the ailing Ser's quarantine cell and Arya Stark’s (Maisie Williams) pub reunion with her old pal Hot Pie (Ben Hawkey).

Yes, some of these scenes amount to little more than pure pandering. But what part of “Game of Thrones” doesn’t involve pandering at this point? Viewers are clamoring for a little satisfaction at the end of it all.  To wit: “Stormborn” delivers a long-delayed love scene between Missandei (Nathalie Emmanuel) and Grey Worm (Jacob Anderson). Episode writer Bryan Cogman scripted the interlude to maximize romantic impact as Grey Worm, an Unsullied commander and a eunuch, compensates for his lack of equipment downstairs with a halting, honest declaration of love.

Furthermore, Sunday's hour revealed the whereabouts of the lost Stark direwolf Nymeria, who hasn’t been seen since the drama’s very first episode. Arya encounters Nymeria at the head of a pack; they're about to dine on Ned Stark's little slugger, but the direwolf recognizes Arya, the girl who drove her away. Arya begs Nymeria to come with her, but the wolf simply turns and leaves with her retinue.

At this Arya smiles: “That’s not you,” she whispers. The lives of Stark direwolves tend to mirror those of their masters; if Arya is a lone, wandering killer, so too is her familiar. (Nevertheless, part of me almost expected Ed Sheeran to pop out from behind a tree and softly start singing “Born Free.”) Anyway, I doubt there was much of a question as to whether Nymeria’s been alive all this time. The direwolf remains one of the most formidable hunters in the forest, and in this world the mighty and cunning survive.

Those qualities are always victorious over efforts fueled by notions of what’s right and honorable. The few people in Westeros who strive to do right by others are often beaten back into a corner or murdered outright. Just ask the Hound about that farmer and his daughter.

Tyrion Lannister (Peter Dinklage), more than anyone else in this show, should have known this. Then again, life cast Tyrion in the role of being the Guy Who Does the Right Thing because he is small. Until now he’s gotten ahead by appealing to the more sensible side of his enemies’ natures. When Tyrion proposes a siege over Yara’s insistence than an outright assault would be swift and effective, that makes perfect sense both in terms of what a wise and sensitive counselor would do, and in terms of diplomacy. Leveling King’s Landing in dragonfire not long after its Queen ripped a hole in its belly with wildfire would not do wonders for Dany’s public image.

Despite this, the knowing viewer had to figure that Tyrion’s peaceful solution of laying siege to King’s Landing by securing Highgarden and Dorne was never going to succeed. Sieges are dull, Daenerys has dragons to feed and this show has an audience to entertain. Something had to go terribly wrong.

That it does, spectacularly. Daenerys may be working from a carved tabletop map, but Cersei is playing chess. And her knight, Euron Greyjoy (Pilou Asbæk) knocks off two of Dany’s capital pieces in a high-seas ambush: his niece Yara (Gemma Whelan), and the Sands, led by Ellaria (Indira Varma).

Looking at this purely from the perspective of these departing characters' entertainment value, this is not a huge loss. The Sand Snakes as Martin wrote them in the books are very different from the ones depicted in the series, and they never had much to do other than murder important figures to push the action where the producers wanted it to go. But in murdering the Martells, Ellaria Sand compromised Dorne. Now that she’s off the board, Dorne will fall into Lannister hands and Dorne’s mistress, who Euron captures after slaying the Sand Snakes, is in for a world of pain.

The idea of Yara Greyjoy also is much more enjoyable than the way she's rendered for HBO. While it’s unfortunate that Yara goes out the way that she does, the writers hadn’t set up Yara to be much more than Westerosi’s second best Uber driver before now. Euron wins top prize simply for being a more entertaining pirate than Johnny Depp ever was, and from the moment he strolled into Cersei’s life, he made us want to enjoy more of his leering face. But this gruesome turn produces more questions, since Yara's brother Theon (Alfie Allen) reacted to his uncle holding a blade to his sister's throat by fearfully dropping his sword and leaping overboard. Does Theon have a strategy? And without Yara, why should we continue to care about him? (Note: This paragraph has been updated since its original publication.)

Dany poses a similar question of Varys (Conleth Hill) in one of the episode’s sharper scenes, during which she rightly calls him out for being the man who orchestrated her assassination and wonders why she shouldn't have him killed.  Varys calmly lists the reasons she should accept his alliance even if she doesn’t completely trust him. “You wish to know where my loyalties lie?” he tells her. “Not with any king or queen, but with the people.” (Varys’ tongue would fetch quite a price on the silver market.)

Exciting though it may be to place wagers upon which characters will survive as "Game of Thrones" storms toward its endgame, the producers have reminded us in these episodes that the cost of rich men’s wars are paid for by the commonfolk. Certainly there are think pieces to be written from both sides of the American political spectrum about what exactly “Game of Thrones” is saying about our culture. But “Stormborn” expressly reminds us of the laws of its land, the primary being written into the Targaryen family’s words: If you intend to take what is yours, do it with fire and blood. Boredom and starvation won’t cut it.

The exit of two major characters is accompanied in this episode by the resurfacing of Melisandre (Carice van Houten), the Red Priestess banished from the North, now calling upon Dany to fulfill her lord's divine dictate. The always handy Missandei re-translates her prophecy about the “Prince That Was Promised” to explain that the Valyrian word for “prince” has no gender — just like Time Lords! — so it could be a prince or a princess, and who cares really, as long as it brings us closer to a family reunion between the Dragon Queen and the White Wolf, Jon Snow (Kit Harington).

Jon, meanwhile, ventures to Dragonstone to parley with Dany against the advice of the other Northern lords, leaving Winterfell under the care of Sansa (Sophie Turner). And the eldest true-born Stark looks as hungry to hold this power as she is terrified by the burden of that duty. Back up (or competition?) is on the way, as Arya heads back to Winterfell, while on Dragonstone Dany still has the sharp Queen of Thorns Olenna Tyrell (Diana Rigg) at her side. Highgarden may be lost, and the loyalty of its bannermen is in question. But Olenna doesn't care about that. “The lords in Westeros are sheep,” she tells Dany, advising her to ignore the advice of clever men. “Are you a sheep? No. You’re a dragon. Be a dragon.”

As long as the untamed souls in this game follow their instincts, there may be hope for some of the small folk after all — but only after these predators have consumed all of the obstacles in their paths.