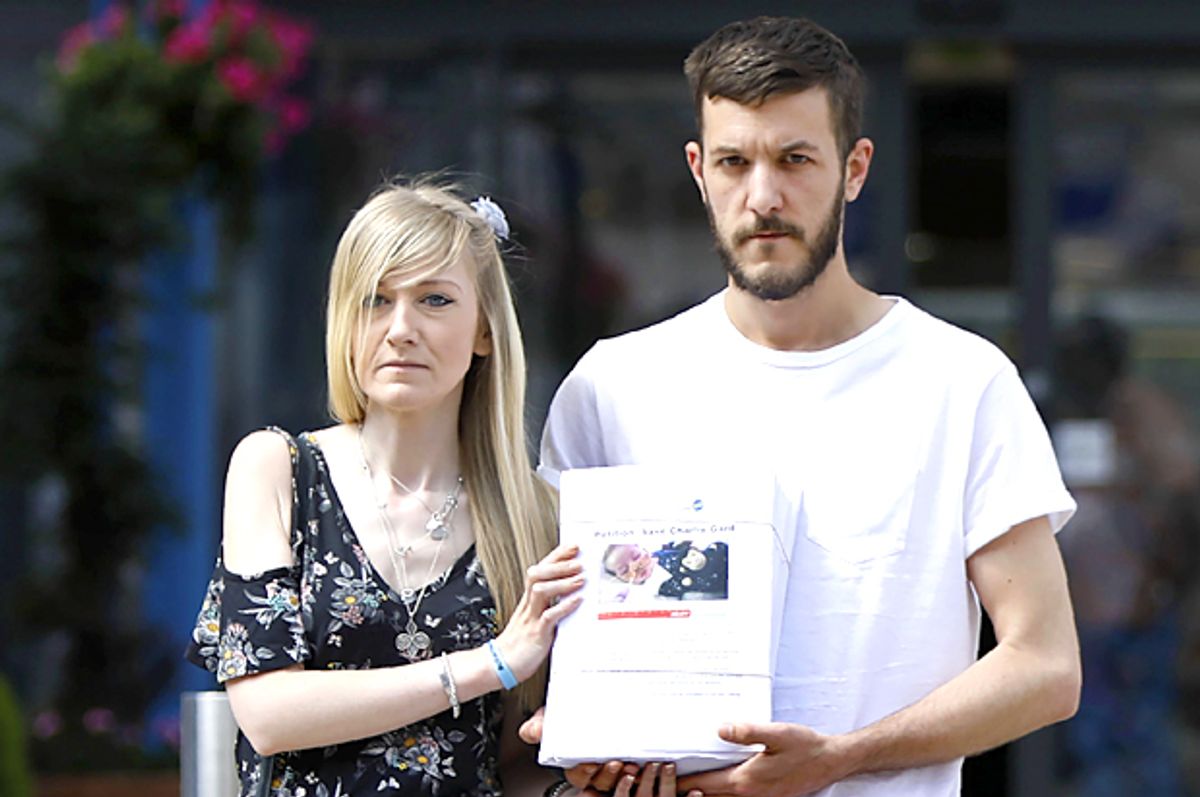 Connie Yates and Chris Gard, parents of Charlie Gard, pose with a petition of signatures supporting their case. (Getty/Tolga Akmen)
--

The sad story of Charlie Gard, a dying British baby who became a cause célèbre on the American right, seems to be coming to a close. Charlie's parents, Chris Gard and Connie Yates, have agreed to let the boy, who has a painful and terminal case of mitochondrial DNA depletion syndrome, to be taken off life support.

The story is sad enough by itself, but has been made exponentially worse by the right wing vultures in the United States who exploited this tragedy in order to push for legislation to strip health care away from millions of Americans — including disabled children.

How a dying baby in the UK became a propaganda object for opponents of universal health care in the U.S. is a complex story, but does a great deal to expose both the cynicism and sadism that infects American conservatism, even as they drape themselves in the "pro-life" label.

First, a quick summary of the case: Charlie Gard was born with a rare genetic disorder that doctors who examined him agreed was both terminal and painful. The experts recommended taking him off life support. His parents understandably didn't want to accept that and cast around until they found an American doctor who was willing to try an experimental treatment, which hadn't even been tested on mice yet. The parents petitioned the government for permission to try this treatment. The best hope was that it would help Charlie breathe a bit better, but even the doctor admitted it wouldn't fix his extensive brain damage. The court declined the petition. Last week, the American doctor, Dr. Michia Hirano, finally had a chance to examine Charlie and now agrees with British doctors that there's no reason to try this experimental treatment. Charlie's parents have decided to stop fighting.

This situation was bad enough, but it was made exponentially worse once American conservatives waded into the issue, making Charlie Gard their new Terri Schiavo.

See, the American right has a political problem, and they hoped this dying baby could fix it. Conservatives are struggling to square their claims to be "pro-life" with the fact that they support Republican efforts to strip millions of people of their health care coverage, a plan that would also slash Medicaid funding that covers medical expenses for 60 percent of disabled children.

Enter the Charlie Gard case. Conservatives are using Charlie's case to imply that universal health care and government-run programs are bad for disabled children. The argument here is that the UK's National Health Services is an evil government bureaucracy that stopped Charlie from getting treatment and that for-profit health care services would have saved him.

It's poppycock, of course, and not just because the reports have shown that the baby has been receiving professional, compassionate care and that the hospital's case for taking him off life support has been a merciful one — they are worried he's in a lot of pain and know that he is not going to get better. Charlie's doctors are responding to the facts of his condition, not the demands of the NHS, as the court case amply demonstrated.

The right's argument is also nonsense because, prior to the implementation of the Affordable Care Act, 45,000 people a year died from lack of health insurance. To make it worse, for-profit health care systems denied people necessary, evidence-based care all the time, just because they didn't want to pay for it. The situation was so bad that the ACA banned the practice of insurance companies dropping patients deemed too expensive to cover who, unlike Charlie, had a shot at being saved.

That we're even having this conversation at all is bonkers. I doubt very much that even the most hardened right wing nut actually thinks that losing health care coverage is somehow better, especially for very sick and disabled people, than having a system, like Great Britain's, where everyone is entitled to healthcare.

No, the only reason that conservatives are pushing the Charlie Gard cause is to inject some noise and distraction into the discourse. It's a bad faith attempt to make the conversation around the health care coverage law confusing and upsetting in hopes that people just give up in disgust, making it easier for the right to cram through a bill to end access for millions.

Now Charlie's parents seem to believe that if he had just received this experimental treatment sooner, Charlie would have had a chance. That's almost certainly not true, but it's easy to see how vulnerable people would believe this, since so many of the people exploiting their case have pushed the narrative that he could be saved. So not only have conservatives made a spectacle out of this family's tragedy in order to score cheap and misleading political points, but they have helped make the suffering worse for Charlie's parents by feeding them false beliefs.

This family's suffering was made worse and this baby's tragedy exploited, all so that some right wing nuts could have a cheap "gotcha" moment — one that doesn't even hold up under the slightest scrutiny. American conservatism is a vampiric ideology, and this case proves it.