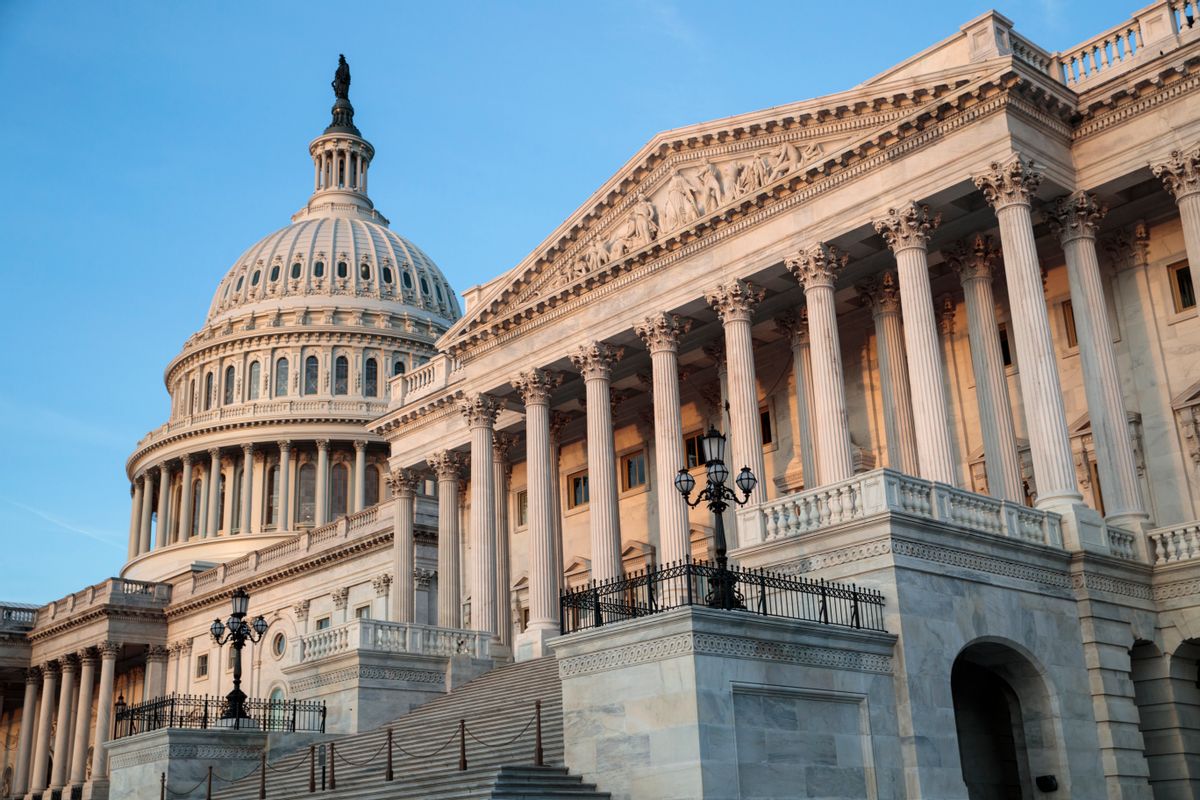 The New York Times and Washington Post reported that President Trump has had conversations with top officials about whether he could pardon himself and his family, and also suggested that the White House could be mounting an attack on the credibility of Robert Mueller, the special prosecutor leading the investigation into Russian influence on the 2016 campaign.

Trump’s “election integrity” commission convened for the first time on Wednesday and he wasted no time assailing state election officials who have refused the panel’s unprecedented request for detailed voter data. The president alleged, darkly, that uncooperative states might have something to hide. “One had to wonder what they’re worried about,” Trump said. “There’s something. There always is.”

Then as the session concluded, an MSNBC reporter asked vice chairman Kris Kobach, Kansas’ Republican secretary of state, whether he believed, as Trump has suggested, that Hillary Clinton won the popular vote by 2.8 million votes because of voter fraud. “We will probably never know the answer to that question,” Kobach replied.

With so much news, however, perhaps the most shocking and consequential story of all slipped under the radar: A bombshell report in the Nation that the American Legislative Exchange Counsel (ALEC) — the most influential power behind conservative legislation marching through state legislatures — has drafted a proposal to return the power to select U.S. senators to state legislators.

That’s right: ALEC’s “model legislation” would repeal the 17th amendment, end more than a century of American citizens electing U.S. senators at the ballot box, and empower gerrymandered legislatures to choose senators for us, as was the practice in the 18th and 19th centuries.

As John Nichols, who broke the story for the Nation, wrote: “If successful, they will reverse one of the great strides toward democracy in American history: the 1913 decision to end the corrupt practice of letting state legislators barter off Senate seats in backroom deals with campaign donors and lobbyists.”

The language of this draft resolution, however, frames this in precisely the opposite way. It argues that the 17th amendment, ratified in 1914, did not empower voters but instead disempowered states. As a result, there have been “many unintended consequences, including runaway federal deficits, unfunded mandates, overreach by federal agencies and burdensome impositions by the federal government upon the states.”

If this sounds nutty and far-fetched, however, it’s a position with growing weight inside the conservative movement – and as Nichols reports, has generated positive reviews even from some Republican U.S. senators. Utah Sen. Mike Lee has called the 17th amendment “a mistake,” Nichols notes, and Arizona Sen. Jeff Flake endorsed it as “better as it reinforces the notion of federalism to have senators appointed by state legislatures.”

This would also reinforce Republican majorities in the Senate, where the GOP now holds a 52-48 edge. Right now at the state level, however, Republicans control 69 of 99 state legislative chambers, hold both branches in 32 states. Republicans, then, would potentially start with a supermajority of 64 U.S. senators.

That would include both seats in swing states like Ohio — where an effective GOP gerrymander in 2011 helped create a 66-33 supermajority in the state house and a 24-9 advantage in the state senate — and Michigan, where Democratic state house candidates have earned more total votes in 2012, 2014 and 2016, but Republicans continuously win more seats.

Under this proposal, Democratic senators such as Michigan’s Debbie Stabenow, Virginia’s Tim Kaine and Mark Warner, and Wisconsin’s Tammy Baldwin, for example, would be unlikely to be reappointed if the GOP continued to control those legislatures. Would partisan chambers allow for independent voices such as Bernie Sanders or Angus King? Indeed, the draft legislation might not even tolerate independence in office. It includes a provision stating that “state legislatures may issue instructions to, or recall, their Senators at any time.”

The model legislation hasn’t become an official policy resolution yet. It was scheduled to be debated at ALEC’s annual meeting in Denver this weekend. But what gives ALEC such influence is its direct pipeline into state legislatures through conservative state representatives and senators.

Conservatives legislatures, many of them tilted by gerrymandering, have looked to ALEC to shape their policy agendas. Since its founding in 1973, it has served as a clearinghouse for pro-business legislation. ALEC writes the bills. Legislators introduce them. When similar bills are introduced nationwide and race through Republican legislatures, that’s the influence of ALEC.

In Kentucky, Missouri and New Hampshire, three states where Republicans captured new trifectas with both houses of the legislature plus the governor’s office, for example, immediately prioritized passing right-to-work legislation, which strikes at the political power of unions. “We can pretty much do whatever we want right now,” quipped Kentucky state representative Jim DeCesare, as reported by ProPublica.

DeCesare outlined his plans — targeting the minimum wage and prevailing-wage laws as well as collective bargaining agreements— in a phone summit hosted by ALEC shortly after the 2016 election. “Legislators are not the trailblazers of developing policies,” Michael Bowman, an ALEC official, told the group, aslso reported by ProPublica. “They’re actually the retail consumers.”

Ashley Varner, another ALEC strategist, emphasized the opportunities for rapid, under-the-radar change. “There’s a sea of red,” Varner said, adding that hundreds of incumbents from both parties had been ousted. “What are we going to do with these new legislatures?”

Will ALEC be successful in repealing the 17th amendment? It seems like a tremendous longshot, would likely spark outrage among voters, and would face significant legal challenges.

Nevertheless, there is growing evidence that Republican state legislatures are interested in changing longstanding electoral structures to their advantage, In Georgia, changing demographics and the growing influence of minority voters led to a tighter than usual presidential race. Trump defeated Clinton 50–45, but an effective GOP gerrymander returned a 118–62 statehouse supermajority. So in March 2017, in early morning hours, nervous Republicans moved to redraw nine districts, lowering the percentages of Latinos and African Americans, in order to protect newly threatened incumbents. When the suggestion of a rare mid-decade redraw sparked protests, Republicans backed away from the plan.

It also did not take long after Trump’s inauguration for Republican-controlled legislatures to advance — as they did in 2011 and 2015 — new legislation designed to gerrymander the Electoral College. Indeed, had those laws been active for 2012, Mitt Romney would have won a majority of electoral votes from Michigan, Pennsylvania and Wisconsin, despite losing all three states.

The problem was even more stark by 2016. State legislators in Virginia and Minnesota introduced identical bills that would redistribute Electoral College votes based on congressional districts. Several New Hampshire lawmakers also wanted to reapportion their electoral votes. In Virginia, GOP Rep. Mark Cole sponsored a bill that would give one electoral vote to the presidential candidate who carried each of the state’s 11 congressional districts, and two to the winner of the statewide popular vote.

How would that work in practice? Well, Clinton carried Virginia in 2016, defeating Trump by 212,000 votes — 49.7 percent to 44.4 percent — to claim all 13 of Virginia’s electoral votes. Virginia’s congressional districts, however, maximize Republican votes. Despite Clinton’s statewide victory, Trump carried 6 of 11 congressional districts. Under this bill, Trump would have nabbed 6 electoral votes from Clinton in a state he lost.

Meanwhile in Minnesota — another state won by Clinton — Republican legislators sought to allocate themselves electoral votes in a state Republicans haven’t won since 1972. Clinton carried Minnesota with 46.4 percent of the popular vote, compared to Trump’s 44.9. That gave the Democrat all 10 of Minnesota’s electoral votes. Trump, however, carried 5 of the 8 congressional districts—meaning that this bill, if successful, would have given Trump as many votes as Clinton from a state the Democrats won. Overall, then, if these bills had been law in 2016, Trump would have nabbed an additional 11 Electoral College votes from states won by Clinton.

Clinton also carried New Hampshire’s 4 electoral college votes. Granite State GOP lawmakers set their sights on one of those electors. Trump won more votes in New Hampshire’s first congressional district, so three GOP state representatives — in their very first days with complete control of the state legislature and the governor’s office — offered a bill that would apportion the state’s four electors in such a way as to guarantee themselves a share.

In Virginia, Cole’s bill passed through its House subcommittee on a party line vote, only to be withdrawn before reaching the full House. “The time isn’t right,” Cole told reporters when he withdrew his bill after its subcommittee success.

A redrawing of our Electoral College system is no longer some fringe idea. And, perhaps, neither is an end to the popular election of U.S. senators. This is how the gerrymander, taken to extremes, turns the GOP hammerlock on states into a leg-up on permanent control of the White House and Senate as well. We stand on the frightening edge of lasting one-party minority rule that may not be undoable at the ballot box.