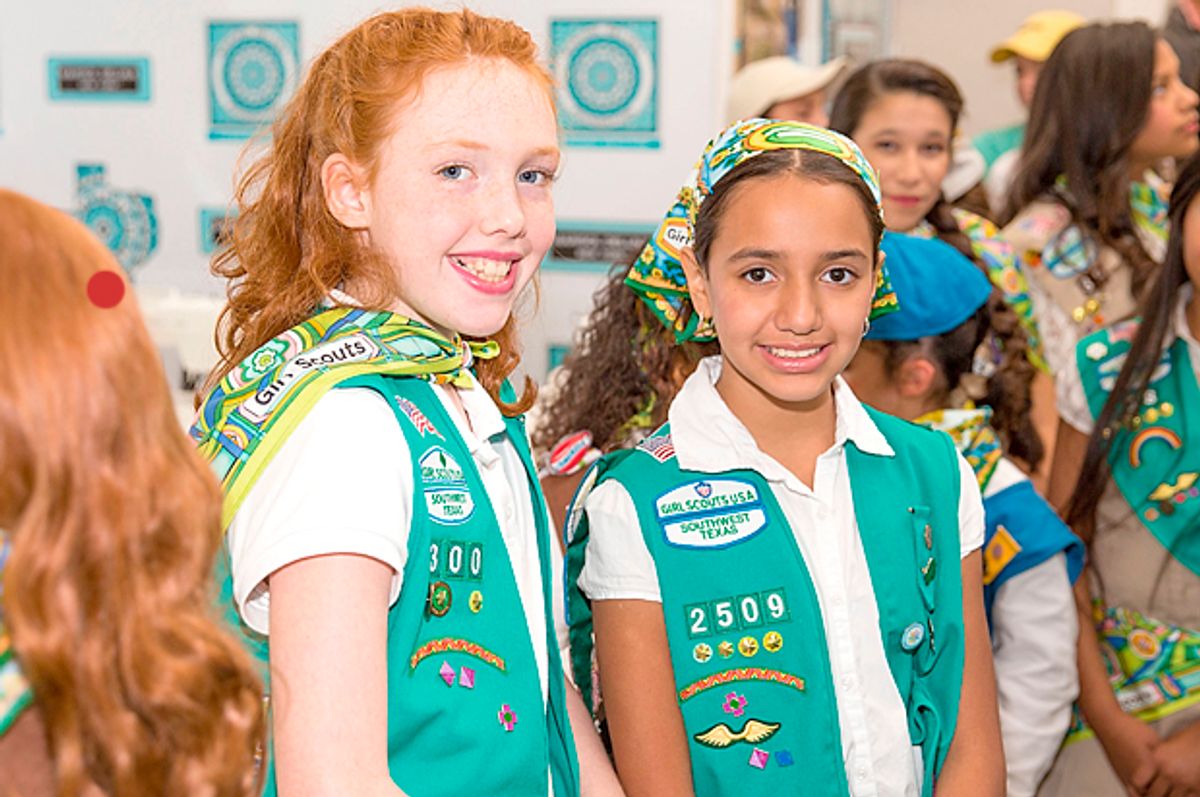 The Girl Scouts of the USA are fighting gender stereotypes one bright colored badge at a time.

The organization announced on Tuesday it will be rolling out 23 new merit badges — all of which are geared toward a young woman's budding interest in science, technology, engineering and math (STEM). The addition of the plethora of badges is the group's largest release yet — beating out the addition of 18 cyber-security badges earlier this year.

GSUSA partnered with groups dedicated to encouraging young women to take part in STEM programs like the Society of Women Engineers, Code.org, and the Leave No Trace Center for Outdoor Ethics. The newest rollout of badges allows scouts to "create algorithms, design robots and racecars, go on environmentally conscious camping trips, collect data in the great outdoors, try their hand at engineering, and so much more." Girls will learn to program, build problem-solving robots, and even learn about aviation design, opening up them up to another world of education.

"A lot of girls haven’t made that shift from using technology to, ‘You can actually be a programmer,'" the organization's CEO Sylvia Acevedo told the Associated Press. "That you’re the one who can make that coding. For a lot of girls, they need to have that hands-on experience so they feel confident," she continued.

Acevedo — a Stanford educated literal rocket scientist who has worked for IBM, Dell, and even NASA's jet propulsion lab — explained that the new badges will act as a catalyst of inspiration for young women to enter STEM fields, just as it did for her when she was just seven-years-old. "Because I got my science badge I developed that courage and that confidence to study science and math at a time when girls like me weren't studying science and math. Girls like me, statistically, weren't even finishing high school," Acevedo said in an interview.

The organization's press release even noted “Girl Scouts are almost twice as likely as non–Girl Scouts to participate in STEM (60 percent versus 35 percent) and outdoor activities (76 percent versus 43 percent).”

The laudable announcement comes to a news cycle where President Donald Trump has brought the Girl Scouts' fully unaffiliated opposite number, the Boy Scouts, into the headlines thanks to an angry, rambling, politicized speech at the organization's annual Jamboree. It also comes in the context of the conservative home-schooling proponent Besty DeVos' young term as Secretary of Education. DeVos, who has expressed dubious views about proven science in the past, has not only taken questionable positions on women's issues but forwarded a vision for the Department of Education that diminishes nationwide efforts to prepare children — both girl and boys — for futures in STEM-field professions.