GOP scrapes out a health care win, for now — but the Trump alliance is headed for disaster 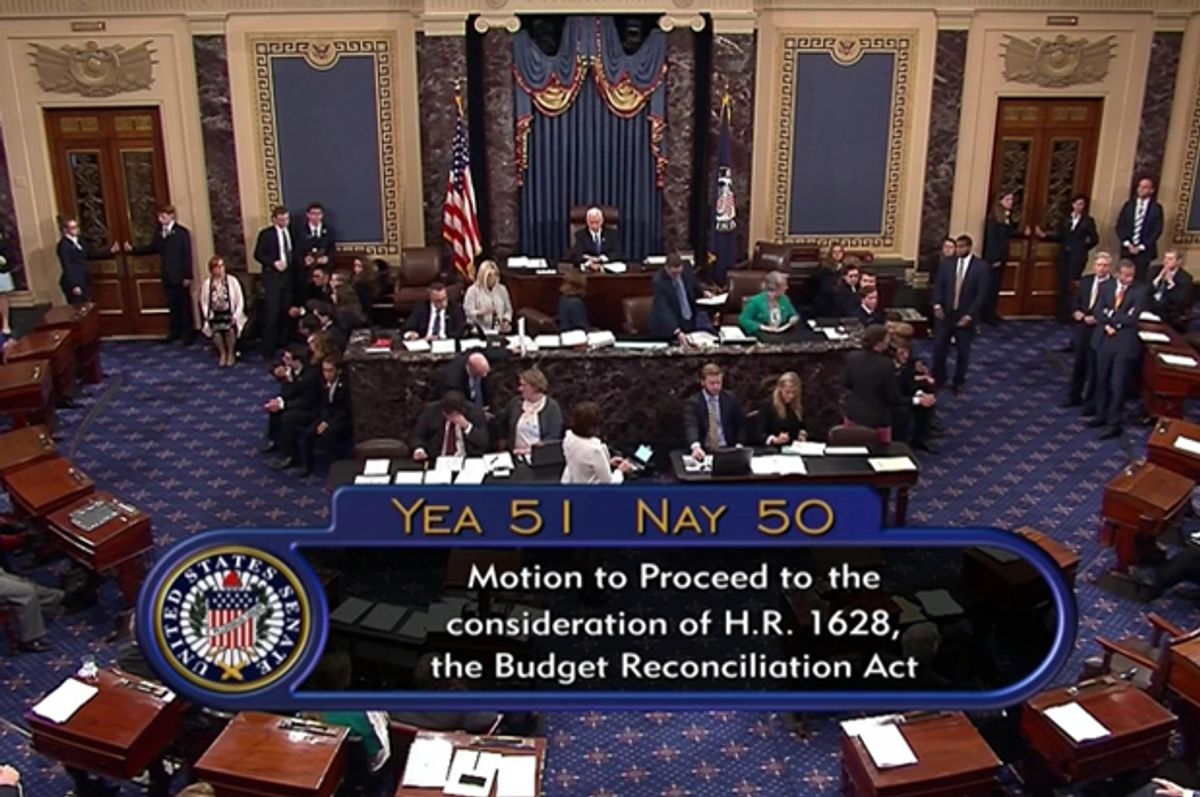 The final Senate vote, with Vice President Mike Pence's vote, to start debate to tear down much of the Obama health care law. (C-SPAN2 via AP)
--

Despite the upshot of Tuesday’s Senate vote to move forward with repealing (and/or replacing) the Affordable Care Act, I’m trying to remain hopeful -- for a change. I’ve been finding myself rendered speechless while observing President Donald Trump’s behavior, his incompetence and brazen lack of decency, wondering out loud when our leaders and our fellow Americans will finally grasp the severity of this crisis enough to rise up against it, irrespective of party affiliation.

It’s too easy these days to slip into despair, especially knowing that the political leader who’s setting the Republican agenda is an unpatriotic, juvenile and extraordinarily dangerous supervillain (complete with crazy costume) who also may be a traitor against democracy -- compromised by the Russian government and its oligarchy. There’s much to be angry and, yes, despondent about, but frankly we’re nowhere near rock bottom yet. The extent of the criminality and authoritarianism of which this president is capable has yet to be fully explored. There’s also more than enough justification, however, to believe that the system -- the government of “We the People,” along with our free press -- will continue to pursue its mandate and hold Donald Trump accountable enough to end this madness before it descends into complete sociopolitical mayhem.

Is my hope for a positive outcome well placed? Perhaps.

Specifically relating to this week’s events, yes, the Republicans may have won the battle for a vote to begin debating a repeal, or possibly a repeal-and-replace, or even what’s being discussed as a “skinny repeal.” But it’s entirely possible they’ll lose the war anyway.

Once again, the GOP could barely muster enough votes to proceed according to the rules of the chamber. As when they voted to confirm Neil Gorsuch to the Supreme Court -- and needed to both block Merrick Garland’s confirmation and also nuke the filibuster, in order to barely confirm the Trump-appointed justice -- the Republicans had to rely on Vice President Mike Pence’s tie-breaking vote and they also had to roust Sen. John McCain from his convalescence after surgery for an aggressive form of brain cancer and fly him back to D.C. And their bill had to remain as secretive as possible in order to hide its insidiousness. Oh, and if the heated gathering around Sen. Ron Johnson, R-Wis., on the floor during the vote was any indication, some heavy duty strong-arming had to be done to get Johnson’s “aye” as well.

Not only does it look like the notorious “Byrd Rule” will come into play now, mandating that every provision of a 50-plus-one reconciliation vote meet the standards of being budget-specific, but that rule has already stricken at least three provisions from the Senate version of Trumpcare. The item in the bill that defunds Planned Parenthood will require 60 votes now, as ordered by the Senate parliamentarian. GOP leaders have indicated that amendments added by Sens. Ted Cruz and Rob Portman will require 60 votes to pass too.

Additionally, if any points of order about other sections are sustained during the debate, those items will also need 60 votes rather than 50-plus-one. At the end of the day, the GOP could end up with a “skinny repeal,” as they’re calling it, which would merely repeal the individual mandate, the employer mandate and the medical device tax. Or they could end up with an un-passable carcass of a bill.

Furthermore, we can expect much more bickering between moderate and conservative Republicans; between Trump supporters and Never-Trumpers; and between Tea Party hotheads and northeastern centrists as the bill gets sorted out among the two chambers, making the debate between factions even more contentious than we’ve seen so far. Furthermore, Republicans should get ready for town halls and protests that make the intense anti-repeal gatherings so far seem like walnut-oil body massages.

On top of the bickering on the Hill and in the town halls, we can expect the know-nothing in the Oval Office to make matters worse for the Republicans by shoving his ludicrously coiffed noggin into the proceedings, taking to Twitter to insult and embarrass crucial members whose support he’ll need, both now and whenever removing him from office starts to look like a real possibility.

Speaking of the president, at some point, perhaps soon, Republican congressional leaders will discover that the name for their pain isn’t “Schumer” or “Pelosi” or “The New York Times,” it’s “Donald J. Trump.” Disgust with Trump’s presidency, especially from Republican A-listers like George Will, Joe Scarborough, David Frum, Bill Kristol and many others, is supercharging the increasingly amplified D.C. opposition to Trumpcare and myriad other agenda items. It’s worth noting that throughout the day, Republican opponents of Trump were on Twitter cheering against the motion to proceed -- a charge they might not have taken up had Trump not been president.

Congressional Republicans will also soon discover that the destabilization that Trump is inflicting upon D.C. and the world in general is rendering the GOP even less trustworthy than it already was. He is dragging down approval numbers for Congress and spawning a practically unprecedented number of congressional challengers for 2018. There are reportedly 209 Democratic challengers so far, compared with previous norms of around 40 at this point in the cycle.

Trump is dead weight for any Republican who’s serious about governing and, indeed, serious about maintaining his or her seat on the Hill through next November (war or terror attack notwithstanding). Paul Ryan and others have to know this already, but D.C. is notoriously slow on the uptake, and too many naive Republicans still seem to be wishing-on-a-star that Trump will finally calm the hell down and take the job seriously. Since it appears Trump is perennially just hours away from firing either Jeff Sessions or Robert Mueller or both in order to continue obstructing the Trump-Russia investigation, matters are likely to get much more dire for the Republicans before they ever improve.

If the Republicans finally lose the war to repeal the ACA, and if the lives and livelihoods of as many as 32 million Americans are once again secure, it’ll be the GOP’s own fault for over-promising, and also for authoring legislation that doesn’t make health care better for anyone. It’ll be their own fault for not recognizing the toxicity of their president -- an illegitimate, despotic and possibly treasonous faker who won’t ever change and whose presidency is heading precipitously downward fast.