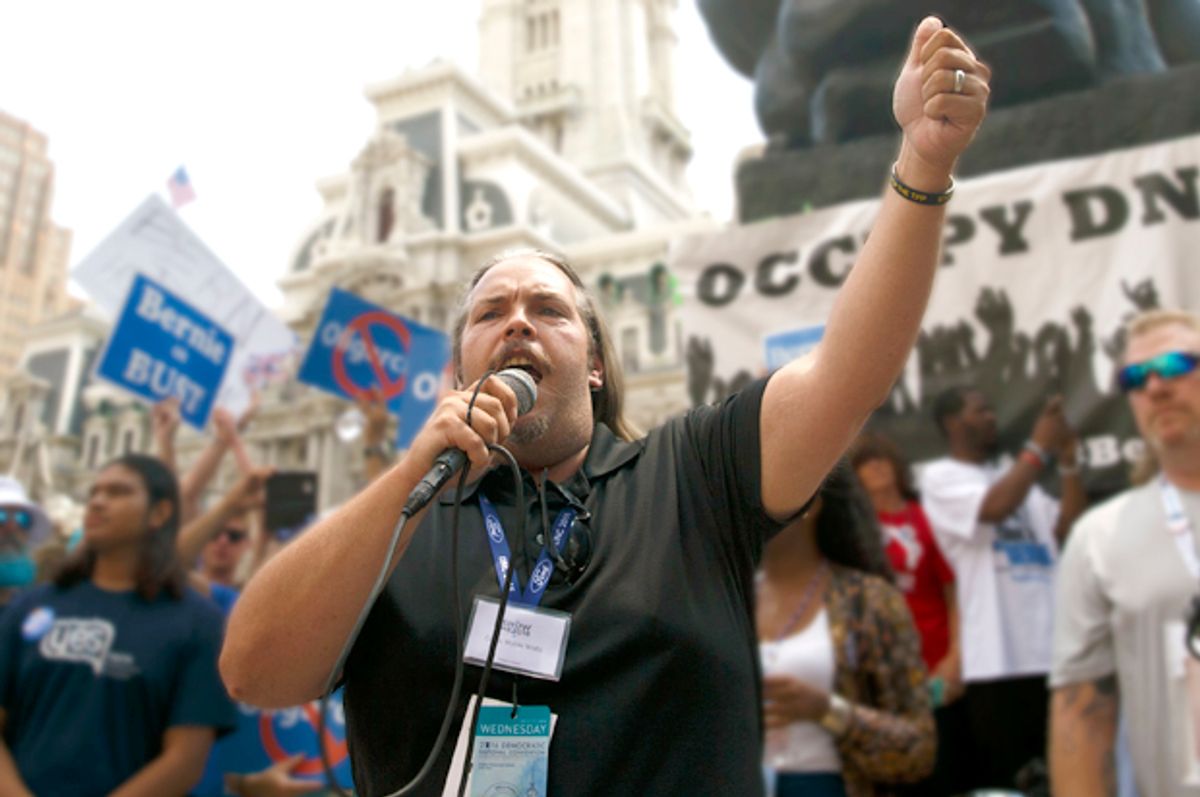 Stop me if this character sounds familiar: he’s been known to show up to big-ticket events in a limousine. His wife, who joins him on stage, “doesn’t look like she should be with me,” in his own words: “She’s very attractive, I’m a regular guy with a few extra pounds.” In front of audiences, he flaunts his wealth and “jetsetting” lifestyle. And he is routinely met with “a wall of boos” from angry crowds.

Despite the similarities to a certain president who had a brush with wrestling, this is the persona of “Volatile” Curtis Wylde, a Missouri-based wrestler who channels our collective anxieties towards tawdry, Trump-esque elites into a wrestling villain of his own design. And although Trump’s story arc in World Wrestling Entertainment made the real estate mogul out to be a hero, in Wylde’s region his similar character is very, very much a villain.

“He’s a heel — absolutely hated,” Wylde says of his Trump-like character. “There are pockets of fans that do like the bad guy. But normally when we walk out of the curtain, I get hit with a wall of audible boos.”

Unlike the wrestling character he plays, Wylde has a more blue-collar lifestyle. A resident of St. Charles county in eastern Missouri, Wylde lives with his wife (who performs with him as “Wyldfyre”) and daughter, and has a day job as an emcee — ”wedding receptions, school dances, etc.,” he explains.

And in this, Wylde fits right into his chosen field. Wrestling is a populist, blue-collar sport if there ever were one, and wrestling’s heroes and villains — “faces” and “heels,” in wrestling-speak — sometimes reflect the political zeitgeist. Last month, we reported on an Appalachian wrestler known as “The Progressive Liberal,” who wears a shirt emblazoned with images of Hillary Clinton, and who in his conservative home region serves as a despised heel.

Yet despite similarly conservative leanings of Wylde’s home county, Wylde’s Trump-like wrestling persona is also a vilified heel, suggesting that the local political climate does not directly inform which wrestling characters will be perceived as villains or heroes. Perhaps Wylde is just a talented enough performer that he is able to use the tropes of conservatism to inspire revulsion rather than admiration, even in a very conservative county. That, or perhaps conservative support for Trump is less deep than most politicians and pundits believe it be.

Wylde does have one more similarity with the braggadocious president he emulates. He, like Trump, is also involved in politics. Unlike Trump and Jesse Ventura, that other famous wrestler-cum-politician who was governor of Minnesota for a spell, Wylde’s affiliations are very, very different. Indeed, he's is running for office as a Berniecrat.

Wylde’s 2018 bid for representative for Missouri House District 107 involves a progressive platform in line with what one would expect from an avowed Bernie Sanders supporter. Wylde advocates for universal healthcare, pro-labor policies, is pro-choice and against corporate money’s influence in politics. “I’d call it the progressive platform,” Wylde told Salon.

When I bring up other famous politicians who were made famous in the wrestling world, Wylde says he eschews the comparison to Trump or Ventura. Instead, he cites another famous wrestler/politician, Abraham Lincoln. “Abraham Lincoln claimed a 300 and 0 record,” Wylde told Salon. “I prefer to be compared to him — supposedly he would push the coffee table out of the way and wrestle you right there if someone wanted to wrestle him.”

It could be said that Curtis Wylde’s path to politics reflects many of the current anxieties of the Democratic Party, and the political left overall. (Many pundits have pointed out that the Democrats often appear hopelessly out of touch with the working class — a class which Wylde counts himself a member of.)

Indeed, Wylde notes that until recently he had a dismal view of the Democratic Party: “Just 2 years ago, when I thought of the Democratic Party, I thought of them as the same as the Republican party . . . The vision I had was a bunch of rich people sitting around a table making decision for me and my family,” Wylde told Salon. “And I thought, ‘why does it have to be rich people?’  A millionaire doesn’t know how people struggle. They can’t deal and make decisions for families that are struggling, because they don’t know their plight and never will.”

“Starting a third party. . . you’re talking about trying to build an infrastructure that already exists here,” he told Salon. “I don’t agree or prescribe to the #DraftBernie movement. I picked a team — the Democratic Party is closer with my values than the Republicans. I told this to Keith Ellison, I’m here because I think [the Democrats] have done a horrible job, they’ve lost almost a thousand seat in the last decade. New blood needs to come in.”

Wylde previously ran unsuccessfully for state house seat in 2016, and in that election, you can see confirmation of many beliefs of the Berniecrat wing of the left — namely, that when Democratic candidates move left, they perform better because they can connect with class-based concerns. Even though Wylde lost his 2016 race, he was able to get 36% of the vote while spending only $6,000; his Republican opponent spent over $100,000.

That Wylde was so successful, while running as a political newcomer in a county that is quite conservative, suggests he was tapping into something. In fact, that election so scared his Republican opponent Nick Schroer that when Schroer took office, he immediately drafted a bill to prevent people like Wylde from running under their “stage names.” “So he could kill name equity that I built up,” Wylde says, then laughs. “If you’re not worried about me, why are you gonna try to pass a law to prevent me from running under that name?”

For what it’s worth, Wylde cites his roots as key to his populist appeal. “Part of the reason people support me is that they can identify with me,” he told Salon. “They know that I’m a real person, I’m genuine, and you can tell by talking to me that I have integrity. I’m proving a regular person can run for public office, out of nowhere, because this job — state representative — isn’t about being a Republican or Democrat, it’s about representing the people in your district.”

Wylde is optimistic about winning against the odds, and his rhetoric is very reminiscent of a certain Vermont Senator: “We can’t outspend big money interests but we can outwork them,” Wylde says. “And we can build communities that are strong . . . communities that when they’re together hold power.”