The Mooch goes on the warpath: Seven of the most jaw-dropping quotes from Anthony Scaramucci’s call to Ryan Lizza 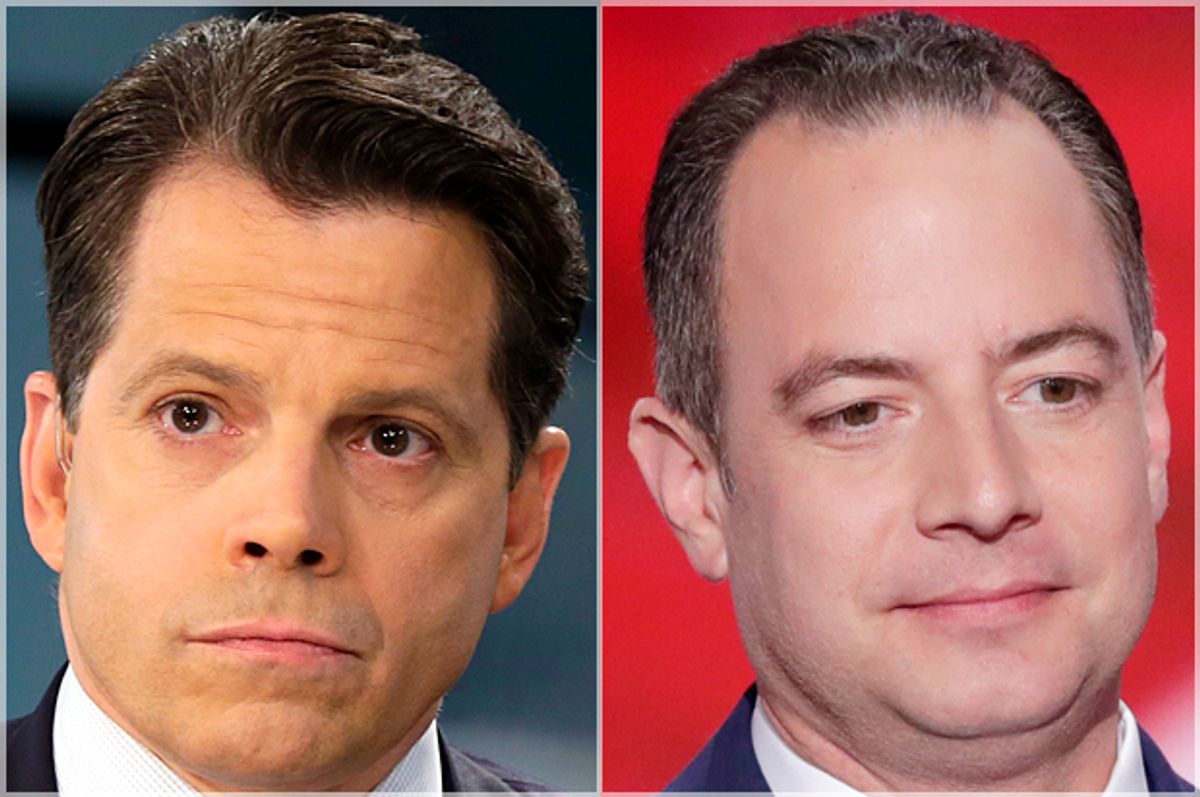 Reince Priebus never wanted Donald Trump to hire Anthony Scaramucci. An aide to the White House chief of staff recently confirmed to the New York Times that Priebus blocked a job offer for Scaramucci during the transition, based on fears that the man known as "the Mooch" would be a destabilizing force in the administration.

Now, less than a week after being introduced as the new White House communications director -- and only hours after embattled White House press secretary and Priebus ally Sean Spicer announced his resignation -- Scaramucci is getting his payback on Priebus. In one of the most bizarre, expletive-riddled interviews any White House adviser has ever offered on the record, Scaramucci made clear to the New Yorker’s Ryan Lizza that he is on the warpath all throughout the West Wing.

Here are Scaramucci's most explosive quotes from Thursday's story:

1. “I want to fucking kill all the leakers.”

“What I want to do is I want to fucking kill all the leakers and I want to get the President’s agenda on track so we can succeed for the American people.”

“I fired one guy the other day. I have three to four people I’ll fire tomorrow. I’ll get to the person who leaked that to you,” he explained to Lizza. “O.K., the Mooch showed up a week ago ... This is going to get cleaned up very shortly, O.K.? Because I nailed these guys. I’ve got digital fingerprints on everything they’ve done through the F.B.I. and the fucking Department of Justice.”

3. "I’m asking you as an American patriot to give me a sense of who leaked it.”

"You’re an American citizen, this is a major catastrophe for the American country,” Scaramucci told Lizza, while demanding the latter reveal a confidential White House source. “So I’m asking you as an American patriot to give me a sense of who leaked it.”

4. Reince Priebus is a “paranoid schizophrenic, a paranoiac.”

“Reince Priebus — if you want to leak something — he’ll be asked to resign very shortly,” Scaramucci threatened. He then did a Priebus imitation: "’Oh, Bill Shine is coming in. Let me leak the fucking thing and see if I can cock-block these people the way I cock-blocked Scaramucci for six months.’”

In a CNN interview Thursday morning, Scaramucci said, "If Reince wants to explain that he's not a leaker, let him do that."

Like Priebus, Trump’s top White House strategic adviser reportedly worked to prevent Scaramucci’s appointment as communications director. “I’m not trying to build my own brand off the fucking strength of the President. I’m here to serve the country,” Scaramucci said of Bannon.

6. “They're going to have to go fuck themselves."

"I've done nothing wrong on my financial disclosures.”

7. “[L]et me go, though, because I’ve gotta start tweeting some shit to make [Priebus] crazy.”

He sent out another tweet on Thursday after Lizza's interview was published: