"There is power to the temporary relationships you have as an actor.": John Cho stars in "Columbus" 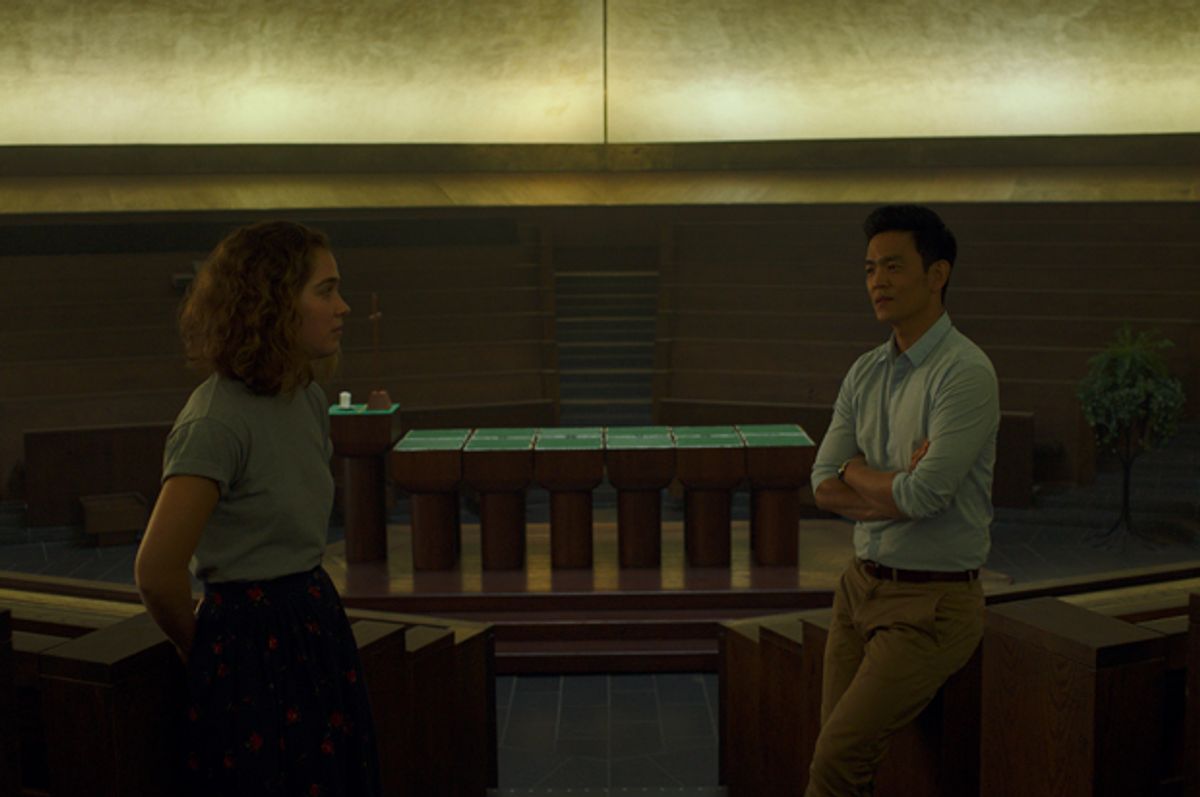 John Cho has the starring role in the extraordinary new film, “Columbus,” written, directed and edited by the mono-monikered Kogonada. The Korean-born actor plays Jin, a translator for a publisher in Seoul, who travels to Columbus, Indiana to be near his father, an architecture professor who is in a coma. Jin reveals that he is not especially close with his father, but he does develop a deep, meaningful friendship with Casey (Haley Lu Richardson), a young woman who loves architecture and has stayed in Columbus to care for her mother (Michelle Forbes). Cho and Richardson have an ingratiating, natural rapport that develops as they visit various architectural sites and discuss their lives.

Cho gives a finely calibrated performance that is both profound and affecting. The actor, who is perhaps best known for his work as Sulu in the “Star Trek” films or from the goofball “Harold and Kumar” comedies, appears both enigmatic and transparent in “Columbus” — sometimes within the same scene. Jin may come off as serious, even hard at first, but as the film progresses, he and Casey reveal their emotions, vulnerabilities and sensitivities.

The magic of Kogonada’s exquisite and very moving film extends to how the director frames every shot brilliantly, incorporating Columbus, Indiana’s modernist architecture as a way of expressing the characters’ thoughts and feelings

Cho spoke with Salon about starring in “Columbus,” and the things and people that move him.

There was a buzzy twitter campaign, #starringjohncho, that raised concerns over the lack of leading man roles for Asian American actors. Can you discuss starring in “Columbus”?

There’s not much planning to my career. It’s more “this moves me, and I have to do it.” That was the case with this script. I met Kogonada and I had to do it. I’ve done things for reasons other than passion, and you can’t strategize your career — or at least, that doesn’t work for me. In the political context you’re speaking about, it's not a reaction to the plight of the Asian American male, but I wear that as a badge of pride. “Columbus” doesn’t play to stereotypes by fighting them. It’s confident enough to be its own story and shrug off the noise about stereotypes and diversity. That’s why I was attracted to it. I’m less concerned with politics and more about expression and truth.

Do you feel pressure to deliver an audience?

I’m not sure what the formula is — and I thought about this a lot — other than: What is the strategy to convince the current gatekeepers their model is flawed? The end of the day, for me — and I’m not dismissing the question — but the answer is to behave independently, and follow your heart, and do what you’re interested in. Thinking about or reacting to stereotypes is its own trap. I’m trying as best I can to not think about it, and I think less about Hollywood and the people who hold the strings of power, and more about Asian Americans and pleasing them and making them proud, or giving them something they can point to and say, “This is good.” And that’s its own trap, too. I don’t know that an artist should be pleasing his own group. It should be about expressing himself. But I can’t deny pleasing my own people.

Casey and Jin develop a bond that is stronger than either of their relationships with their parent. Can you describe a person that has impacted your life in a profound way?

Wow. That’s tough. I was reflecting today that I am drawn to older brother types. My father programmed me because he grew up fatherless, and he looked for older brothers to lean on for guidance. I’ve constantly sought out older men to guide me. It’s strange; they are usually unreliable. [Laughs]. I can’t think of a person who is quite the crutch that Casey and Jin are to each other. I think of the character [played by Everett Sloane] in “Citizen Kane,” who tells the story of girl with the parasol that he saw once, and he thought of for fifty years.

There is power to the temporary relationships you have as an actor. You go in with these casts — and even as a college student, it was amazing how fast you would get intimate with these people — and then you’d never see them again. That is part of the appeal — the ephemeral, transient nature of these people. We are attracted to them because we know they are going out of our lives, possibly forever.

There are a few gestures of kindness from strangers that keep me alive. I was in junior high, and we were moving around a lot. There was an art teacher, Ms. Matsuda — I hope she’s alive and reads this. They were closing the school, and during the summer she called me and said she thought I was talented. We were dirt poor. She told me to come over to the school, and she gave me a box of art paper. I used that paper sparingly for years. I thought of her every single time I drew something, and I was so thankful she gave me this art paper I couldn’t have afforded.

[Pauses, continues]. We were in Seattle and this church family invited us to their home for Christmas and they gave us gifts. I’ll never forget that. It’s a reminder to me not just to be thankful, but for the elasticity of humanity. As much awfulness as there is in the world, this happens also. These kindnesses, you can live on them for years.

There’s a line in the film about Koreans placing importance on family but more importance on work. Can you talk about your family and how they view your work as an actor?

They have always been worried more than anything else. They didn’t forbid me. When I was first starting, they were very unimpressed, even though I was getting shows and plays. But at some point a Korean newspaper interviewed me, and after that I was golden. I had arrived because of "The Korea Times.”

In the larger picture, they can relate deep down as immigrants to the pursuit of happiness, even if they prefer I do something more stable. But they take pride in that I’m representing Asians well. To them, that’s the highest calling. My father was a preacher, so if there’s a service angle, he likes it. My career does a service for the community. That pleases them.

Jin’s dress sense is very deliberate in the film. How would you describe your personal style?

[Laughs]. I don’t know ... I sometimes think I dress very normal American boy, jeans, t-shirts, and it doesn’t seem much of a choice. But nowadays I’ll run into someone from Korea and think they are well dressed, and I look like I’m in cowboy drag. It’s almost comical. I remember saying to Emily, the film’s costume designer, I wanted to look like the modernist buildings.

Maybe because I grew up in churches, my number one is the North Christian Church designed by Saarinen’s son [Eero]. In that church, the preacher is in the center, below the congregants, so the congregants are seated in the round in this beautiful, hexagonal place. They look at each other. God isn’t the building. It’s us, and the preacher is your servant. It was a great example of how space can encourage a certain feeling or thinking. It was holy to me.

There’s a terrific speech in the film where Gabe, played by Rory Culkin, talks about books versus video games. What are your thoughts on the ideas in “Columbus?”

I look at [Gabe’s] speech in the film as, don’t bring a prejudice into knowledge, or think that one thing is more preferable than the other or that we’re dealing with ideas that are loftier. It’s all meaningful, and it’s a mistake to put labels on knowledge or categorize it.

I’m in a place in my life where I’m trying to learn or unlock my own psychology, and I’m at an age where my parents are getting older, and I’m thinking about habits, culture, and why I am who I am, and how my parents are who they are, and applying that to how I raise my children. I love it all, and now I’m inundated with knowledge because I have children. They are great because any fact is thunderous to them. Did you know that a tadpole becomes a frog? In the most basic way, it’s vital.