From 9/11 to President Donald Trump: A short history of World War IV

Philosopher Jean Baudrillard predicted this 15 years ago: The Western world is waging a long war — against itself 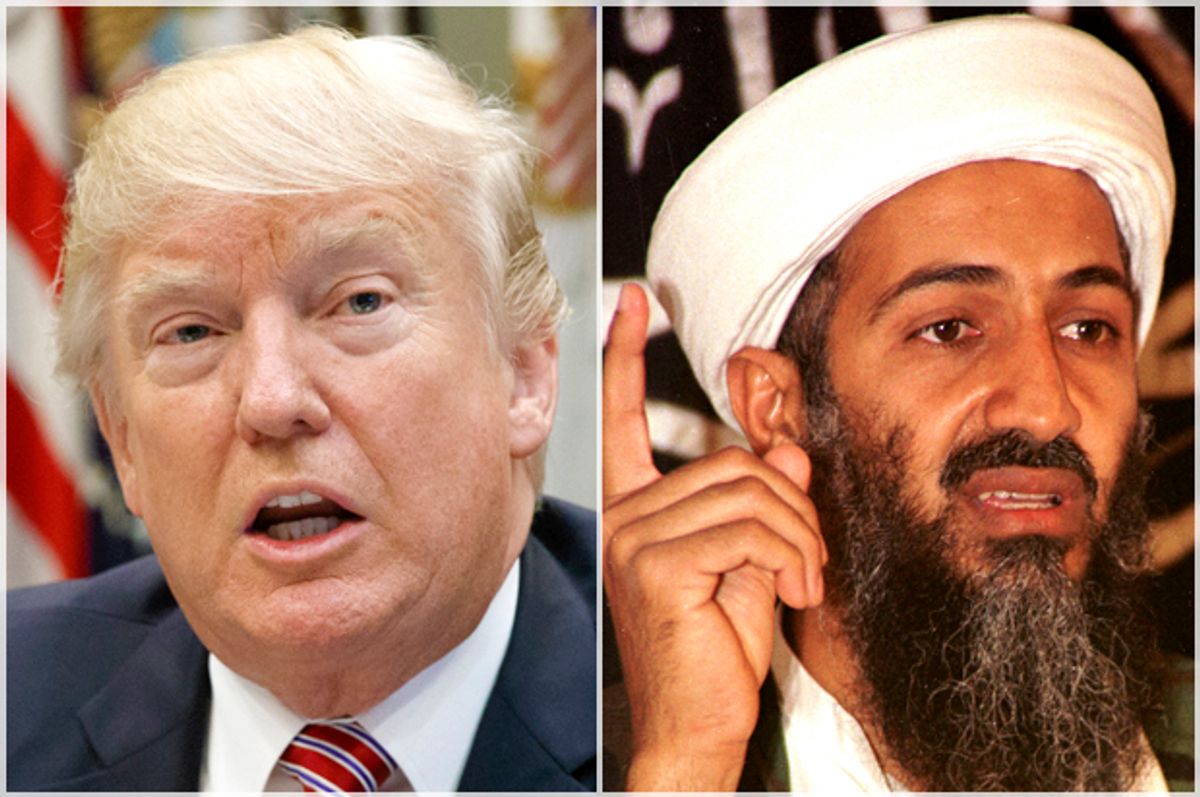 After the terrorist attacks of Sept. 11, 2001 — still a widely misunderstood event, but one that divided the recent history of the world into “before” and “after” — the French philosopher and sociologist Jean Baudrillard floated a hypothesis that many Americans, including some on the left, found shocking or unacceptable. The destruction of the Twin Towers in lower Manhattan, which Baudrillard described as “the ‘mother’ of all events, the pure event uniting within itself all the events that have never taken place,” represented for him the fulfillment of a collective desire, reflecting a “deep-seated complicity” between the dominant world order and those who would destroy it. “The West, in the position of God,” Baudrillard wrote, “has become suicidal, and declared war on itself.”

This idea that “they did it, but we wished for it” did not go over well in an America overcome by patriotic fervor, and preparing to launch into a disastrous decade-plus Middle Eastern war would only make Baudrillard’s diagnosis of suicidal ideation seem more trenchant. After his essay “L’Esprit du terrorisme” was published in English in the February 2002 issue of Harper’s, Baudrillard was accused of offering a moral justification for terrorism and of perceiving the deaths of thousands of people as a symbolic or unreal event, (although he certainly was not alone in comparing the 9/11 attacks to a disaster movie). His essay does neither of those things. Readers either didn’t understand what the author of “Simulacra and Simulation” was trying to say, which was nothing new, or they found his thesis too troubling, too cold-blooded, too dispassionate and simply, to use the contemporary vernacular, too soon.

Read more than 15 years later, Baudrillard’s essay — now available in a different translation, in the 2012 collection “The Spirit of Terrorism” — strikes me as a work of startling, often brilliant insight, almost the only useful attempt to place that traumatic moment in a theoretical context that embraces both psychology and history. Beyond that, his analysis now seems prescient in ways that go well beyond its apparent subject, and provides a framework for understanding more recent events that may appear unrelated, including the political turmoil of the last few years epitomized by the election of Donald Trump.

Although President Trump is clearly an aspect of the Western world's reaction to Islamic terrorism -- or its "abreaction," to use a psychological term Baudrillard employs in his essay -- and has repeatedly vowed to stamp it out, that only underlines the fact that they are closely related phenomena. Like the 9/11 attacks, Trump's ascendancy was a startling rupture in the official narrative of upward-trending Western civilization. Like the 9/11 attacks, Trump has provoked “prodigious jubilation” in some quarters, along with an unwholesome, libidinal fascination among both the media and the worldwide public.

On several occasions, I have tentatively suggested that the unexpected revival of both left-wing and right-wing populism — broadly speaking, the re-emergence of socialism and fascism, both of which were supposed to be dead — signified a new Age of Revolution, somewhat akin to earlier ones in the mid-19th and early 20th centuries. Perhaps what I was really perceiving was a new phase of what Baudrillard identified in 2002 as a global conflict within the Western world, reflecting a deep crisis in its dominant political and economic order. To put this in the most provocative terms possible, has Donald Trump succeeded Osama bin Laden as the central figure of World War IV?

Yeah, I know: If World War III already happened, how did we miss it? We’ll get back to that. Going back to "L'Esprit du terrorisme" and 9/11, Baudrillard argued that we could not hope to understand terrorism if we insisted on perceiving it as something inflicted on us from outside by hateful but mysterious enemies. From that blinkered perspective, the 9/11 attacks were “a pure accident, a purely arbitrary act, the murderous phantasmagoria of a few fanatics” who simply had to be eliminated to set the world to rights. (American military strategy in the Middle East, it is worth noting, continues to be based on that idiotic presumption, even if nobody believes it anymore.) Terrorism had less to do with a global conflict between Islam and the West, Baudrillard suggested, than with an internal crisis or “fracture” within the dominant Western social and economic order. The “fundamental antagonism” that drove terrorism was a matter of “triumphant globalization battling against itself.” (Emphasis in original.)

In the most famous and most controversial passages of his essay, Baudrillard described the collapse of the Twin Towers as “a fiction surpassing fiction,” a “Manhattan disaster movie” that combined the 20th century’s “two elements of mass fascination”: “the white magic of the cinema and the black magic of terrorism.” He was not denying that real people died in the towers, only saying that nearly all of us consumed that dreadful event as a media spectacle. There are premonitions of a certain reality-show celebrity turned politician who subverted an entire campaign cycle here as well, in the observation that the terrorists exploited the media economy and its “instantaneous worldwide transmission” of spectacle, but that none of us could resist its power: “There is no ‘good’ use of the media; the media are part of the event, they are part of the terror, and they work in both directions.”

One can apply virtually all of this analysis to Trumpism, which may suggest that the Trump movement is a form of terrorism conducted by other means. There is a similar urge among many Americans to explain away the election of Trump as a meaningless or anomalous event, an event that in some sense did not really happen. If it was the result of mass delusion and bigotry, fueled or enabled by the nefarious machinations of Vladimir Putin, then no further explanation is necessary and removing the president from office — preferably before the 2020 election — will at least begin to undo the damage.

I have previously discussed the multiple levels of magical thinking at work here, and the fact that many liberals continue to dream of impeachment (or 25th Amendment scenarios still more fanciful than that) exposes how tenuously such fantasies are connected to political reality. No American president has ever been removed from office through the impeachment process, still less through the bizarre kangaroo-court proceedings envisioned by the 25th Amendment; Democrats currently control neither house of Congress and will never, even in some imaginary Big Rock Candy Mountain era of liberal hegemony, command the 67 votes needed for conviction in the Senate.

It may be that the Trump phenomenon itself is transitory, but the internal fracture it exposes in Western society is not. I believe it’s more useful to consider the Trump presidency the way Baudrillard considered the terror attacks of 9/11, as a nihilistic and self-destructive “ruptural event” that symbolizes “the emergence of a radical antagonism” at the heart of the global capitalist order. Baudrillard died in 2007 — blissfully unaware of the coming Trumpocalypse, one hopes — but I suspect he would contend today that these events that appear to represent ideological opposites are in fact key battlefield markers in the global conflict he identified as a fourth World War. (The third one, in his schema, was the nuclear standoff of the Cold War, which ended with the defeat of communism and the consolidation of global capitalist order.)

Consider the following passage from a subsequent essay called “Hypotheses on Terrorism,” in which Baudrillard rejects what he calls the “zero hypothesis,” that being the idea that “September 11 constituted merely an accident or incident on the path to irreversible globalization.” For our present purposes, we might say that the zero hypothesis holds that Donald Trump is just a blip on the radar screen of democracy and that the usual rotation of center-right and center-left managerial politics will inevitably soon be restored.

According to the zero hypothesis, the terrorist event is insignificant. It ought not to have existed and, basically, it does not exist. This is to see things in terms of the idea that Evil is mere illusion or an accidental vicissitude in the trajectory of Good — in this case, the trajectory of the World Order and a happy Globalization. Theology has always based itself on this unreality of Evil as such.

Another hypothesis: It was an act of suicidal madmen, psychopaths, fanatics of a perverted cause, themselves manipulated by some evil power, which is merely exploiting the resentment and hatred of oppressed peoples to sate its destructive rage. The same hypothesis — but more favorably put, and attempting to lend terrorism a kind of historical rationale — is the one that sees it as the real expression of the despair of oppressed peoples.

Replace those sardonic, period-specific references to globalization and the “World Order” with other things — perhaps “liberal democracy” or even “progressive values” — and read the despairing “oppressed peoples” of the world as Rust Belt white folks hooked on Fox News and Vicodin, and you can apply that word for word to America’s current state of Trumpified bewilderment. The underlying question is exactly the same: Were the shocking attacks of September 2001 and the shocking election result of November 2016 — 9/11 and 11/9, the palindrome that defines our age — fluke occurrences amid the general upward trajectory of Western civilization? Or do they represent, as Baudrillard argued in the first instance, Western civilization’s innate yearning toward its own destruction?

Maybe it sounds cynical or pessimistic to proclaim that the Trump presidency is the latest battleground of World War IV, whose end is not yet in sight. That framing might shift our perspective to goals beyond a Democratic Congress in 2019, the impeachment and public pillory of Donald Trump and the election of President Joe Biden or Kamala Harris in 2020. (Only one of those is plausible.) But it does not imply that there’s no point in resisting Trump’s agenda or Trump’s politics on a pragmatic, day-to-day level. Similarly, when Baudrillard suggested that the origins of modern terrorism lay in a “total misunderstanding” about the relationship between good and evil at the heart of Western philosophy and that terrorism could never be conclusively defeated because it was coming (so to speak) from inside the house, I don’t think he meant to say that the relevant authorities should give up trying to prevent it.

Writing only a few months after the 9/11 attacks, Baudrillard predicted that the Western world’s “gigantic abreaction” to terrorism would ultimately reveal the true extent of the terrorist victory. A system-wide “moral and psychological downturn” was already visible that went beyond politics or the financial markets into “the whole ideology of freedom … on which the Western world prided itself, and on which it drew to exert its hold over the rest of the world.” The liberal global order of capitalism and democracy (words he conspicuously avoids, for his own reasons) was becoming its own dark mirror-image, “a police-state globalization, a total control, a terror based on ‘law-and-order’ measures.”

That is the world we live in now: the world of World War IV. The scale of the self-inflicted defeat in that first battle — which was more like an abject surrender — was greater than Baudrillard or anyone else could have imagined in 2002. It paved the way for many other defeats, large and small, including the spectacular and improbable rise of a clownish would-be dictator who barely pretends to care about the supposedly sacred traditions of democracy and who embodies the grossest possible caricature of the “ideology of freedom.”

He has turned the most powerful nation in the history of the world into a global laughingstock, even if the joke has long since stopped being funny. We can’t claim we didn’t have it coming, and he definitely couldn’t have done it by himself. Getting him out of the White House would be a good thing, needless to say. But let’s not kid ourselves: It wouldn’t end the war.