There's never been a president who so thoroughly invites mockery, but not all Trump jokes are equally funny 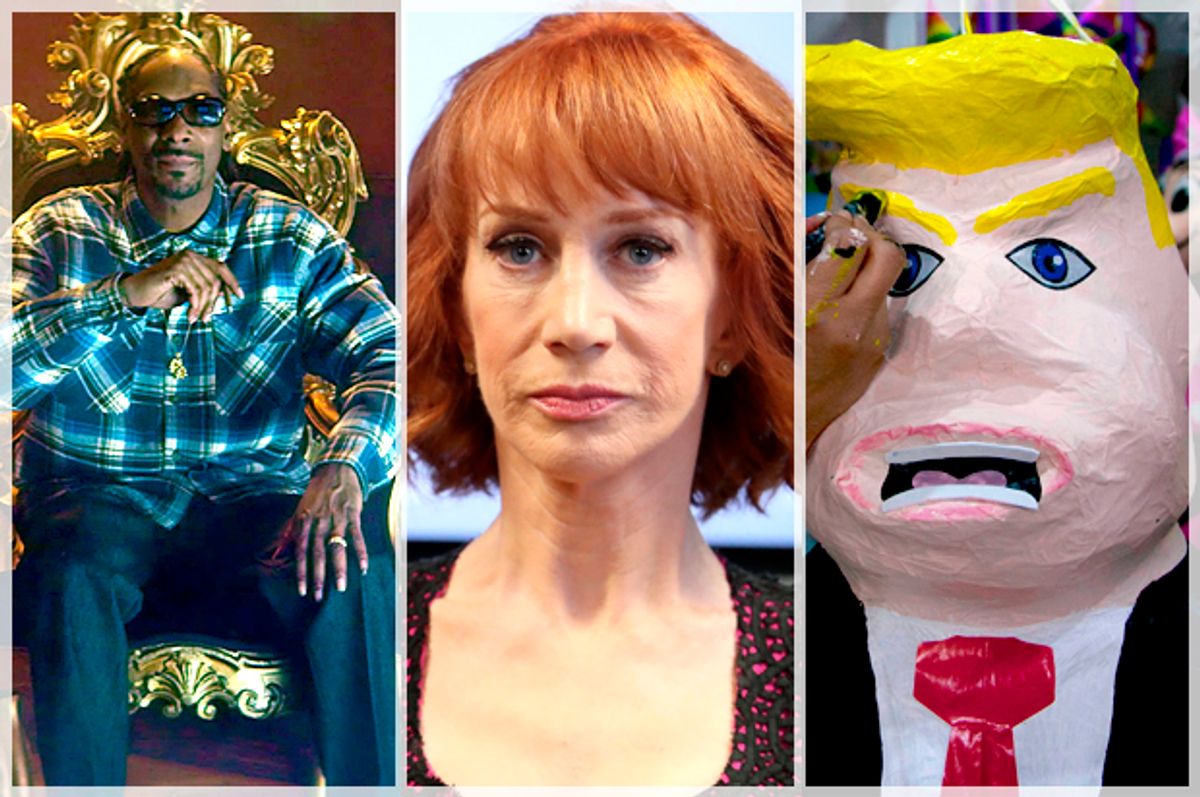 There may never have been a U.S. president who has more thoroughly encouraged public mockery than Donald Trump. It is not just that he is woefully unprepared for the job, that he doesn’t seem to be able to speak English, that he paints his face orange and uses a comb over or that he is a bombastic bully; it is that Trump himself loves to mock, humiliate and laugh at others. Trump’s own cavalier “jokes” seem to invite an open season on jokes back at him.

Well before he ran for office, Trump had created a reputation for himself as a nasty, sarcastic jokester who especially enjoyed humiliating women and minorities. Recall that on the campaign trail, he even joked that he could shoot someone and not lose any supporters.

Because we have a president who regularly ridicules and derides others, we have witnessed a real mainstreaming of some pretty nasty Trump jokes. Trump is a joke, after all, so it is of little surprise that there is a whole lot of Trump humor out there. But what I’m interested in for this piece are the jokes about a dead Trump. Is dead Trump funny? And if not, what does the rise of these jokes tell us about humor in the Trump era?

There have been a number of high profile dead Trump jokes: the Kathy Griffin decapitated head photo, Snoop Dogg's music video featuring a mock "shooting" of a clownish Trump and Johnny Depp’s quip about actors assassinating presidents are only three of the most well known.

While it is a hard line to draw, we have to distinguish between people calling for Trump to be assassinated and people joking about it, since there is a real difference between jokes and literal threats. According to data reported by Piers Morgan, after Madonna suggested she would like to blow up the White House, there were no less than 12,000 tweets in two weeks calling for Trump to be killed. Clearly not all of those tweets were in jest.

Dead Trump jokes are not identical to threats (although there will be times when folks making threats will try to claim they were joking to avoid consequences, using what I have called “the Colbert defense”). So why does someone joke about killing a leader? What is gained by it? And why might it be funny?

Jokes about dead leaders are usually not about the specific person but rather about what that leader represents. And because they are jokes about someone in power, it is more common to tolerate a dead president joke than one about a dead child, for instance. Dead Trump is only funny because he is a powerful figure. The joke punches up, hitting someone with power and prestige — that makes it more commonly accepted as within bounds.

And if that leader is a bombastic, bullying, jerk, dead jokes are likely to be considered even funnier. While it’s generally the sense that the Griffin and the Depp jokes were unfunny and inappropriate, some of us might still find other dead Trump jokes funny.

For instance, for some, myself included, the rise of Trump piñatas is pretty hilarious. While it might seem hypocritical to prefer one dead Trump joke to another, there is a clear difference between a photo of a mock decapitated Trump and a piñata of him: first, a piñata, while meant to be beaten to pieces, is simply not as gruesome an image and second, it is Trump’s own mocking of Mexicans that makes a Trump piñata such a gratifying joke.

Given the fact that you can buy extra-large Trump piñatas at Walmart, clearly I’m not alone in finding it funny.

But, to be fair, a Trump piñata still belongs to the cohort of dead Trump jokes. While metaphorical, it is still a basically violent joke too. So why would it be funny? And why, for instance, would I not find Walmart’s Obama piñata funny in the same way?

The first key to understanding dead Trump jokes is recognizing that all jokes depend on creating a group of “it getters” (those in on the joke) and butts (those targeted by it). When you create a dead Trump joke, you are appealing to those that align with your views, and you are ostracizing those that don’t. All humor works this way, but jokes about death really exacerbate those divisions.

Paul Lewis analyzes what he calls “butt wars” — that is, debates over what constitutes good and bad types of jokes. He points out that butt wars generally track in predictable ways. We don’t like jokes about people or things we hold in high esteem, and we find jokes about people and things we dislike immensely funny. This is generally true across the political spectrum.

That said, there have been general political divisions over the lines between appropriate jokes and those that aren’t. The left, with their so-called PC attitudes, generally considers a whole set of jokes to be, if not poor taste, then outright hate speech. For example, for many of us rape jokes are off limits. Just as jokes that target minorities are out. Meanwhile, the right, led by the likes of Ann Coulter, argues that anything and everything is fair game for a joke. If a joke offends you, they argue, then you need to grow tougher skin and deal.

What we think is funny and how we respond to jokes has become as stark a dividing line as red versus blue. But dead Trump jokes have created some unexpected outcomes. First, they have weirdly led the right to rise up in indignation over Trump jokes emulating the sort of PC, snowflake hissy fits they condemn from the left.

One of the best ways to unpack whether dead Trump is funny is to track what happened in the wake of the Kathy Griffin decapitated Trump story. To refresh your memory, Griffin posed for a gruesome photo that had her holding a disturbing likeness of a beheaded Trump.

Griffin later apologized, but I’m less interested in her part of the story than in the collective response to it. On the left, the common retort to the Griffin photo was to remind everyone of the lynched Obama “jokes” that circulated when he was president. Another common anti-Trump response was to remind folks of how Ted Nugent threatened Obama at a 2012 National Rifle Association meeting in St. Louis: “We need to ride into that battlefield and chop their [the Obama administration’s] heads off in November.”

In contrast to his outrage over Griffin’s pic, here was Trump’s response to Nugent’s threat:

Nugent would later be invited to the White House by Trump.

All of this combines to reveal to us that Trump and his supporters are hypocrites. That's not exactly a huge surprise.

The reaction to the Griffin pic on the left was worse, I think, and it exposes the way that the Trump era has really challenged our collective ability to practice critical thinking. Saying that Griffin’s pic was not offensive because there were lots of offensive jokes about Obama is a completely immature and unsophisticated argument.

And, even if we want to protect First Amendment free speech rights, we should be able to have a reasonable conversation about jokes in poor taste or that are offensive. Trump may invite these sorts of jokes, but we don’t have to humor him.

There is a darker side to the Trump gallows humor, and that is the notion that dead Trump jokes are funny because they offer catharsis in a time of crisis. Calling these jokes gallows humor is not a reference to Trump as dead; it is a reference to the idea that many in our nation and around the world feel like we are doomed.

Randal Rauser explains that gallows humor is defined as “witticism in the face of — and in response to — a hopeless situation. It arises from stressful, traumatic, or life-threatening situations, often in circumstances such that death is perceived as impending and unavoidable.”

There is a collective catharsis offered by jokes in the face of trauma and crisis. This is why we laugh in awkward moments. Mocking a leader we think is threatening us offers our brains a chance to take a break from fear. And that’s why it can feel so good to laugh at dead Trump.

It’s a short-term fix, though, and while all dead Trump jokes are not equal, there are more reasons to avoid them than to celebrate them. Besides the fact that we would do well not to allow the Trump era to pull us all into his swamp of hate speech and invective, it’s worth remembering that Trump is president. That means that if a joke has sharp enough teeth, then the Secret Service will investigate.

But the real reason to avoid dead Trump jokes is the type of humor they depend on. Dead Trump jokes are pure mockery. They make us laugh because they cut him down. They give us pleasure because they make him suffer. There is catharsis in the joke, but there’s no critical thinking.

Given that the Trump administration offers a daily assault on reason and reality, the best humor to take him down will be ironic satire, not comedic derision. On the eve of Trump’s inauguration, Michael Moore called for an army of comedy to combat the Trump agenda. But Moore didn’t mean any sort of comedy or any sort of joke. He meant satire with its ironic wit and sharp insight.

Rather than the cheap joke, we need to favor the sort of comedy that helps us make sense of the crazy. So, rather than a crude dead Trump joke, we need more critical and creative uses of irony and parody. The best Trump jokes will be ones that go right over his head, not the ones that cut it off.