Sure, "give up" on Ivanka — but don't take your eyes off her

Of course Ivanka sold out transgender soldiers. She was raising money for Mike Pence this week instead 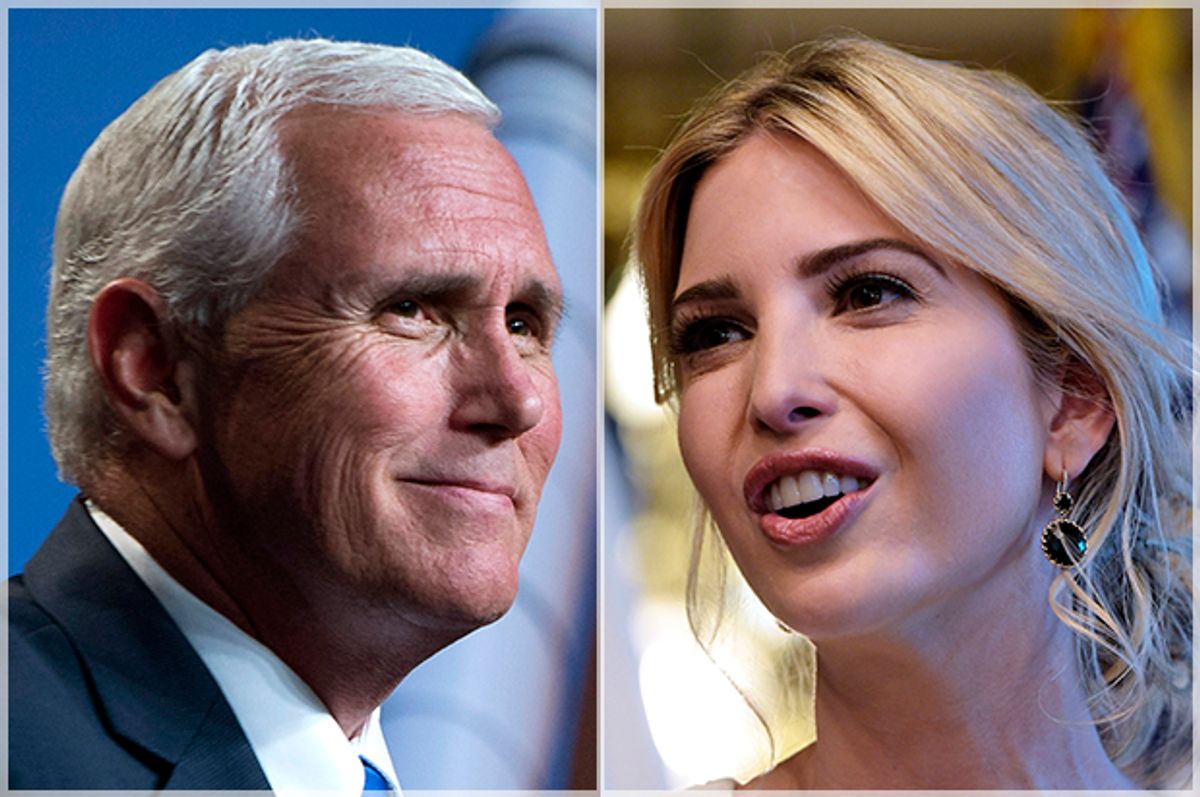 The past week in Washington politics has felt like a month. President Donald Trump making a grotesque spectacle of himself at the Boy Scout National Jamboree, his war on Jeff Sessions, his tweets announcing that transgender individuals would no longer be allowed to serve in the military. The drawn-out drama of the health care vote, complete with sidebar on whether John McCain is a hero or a monster, or both. Jared Kushner insisting that he “did not collude” with Russia. The first full week on the job of an Ari Gold understudy we apparently must call "The Mooch," a walking trashmouth who should be indicted for planting the image of Steve Bannon fellating himself into our collective imaginations. And to round it out, Trump firing White House Chief of Staff Reince Priebus, that Mooch-dubbed “fucking paranoid schizophrenic,” yesterday evening from Air Force One, via tweets.

I’m tired; you’re tired. And it’s only been six months.

And so it wasn't a surprise when this Associated Press story about White House adviser and first daughter Ivanka Trump ended up buried under a pile of tweetstorms, phone rants and late-night C-SPAN binges. On Tuesday, Ivanka spoke at a fundraiser for Mike Pence that brought in about $1 million for the vice president’s Great America Committee, which will be used to fund Republican candidates. According to the AP, Ivanka, surrounded by GOP lawmakers, including Paul Ryan and Mitch McConnell, “spoke glowingly of Pence and said his political committee would be helpful to Republicans facing 2018 congressional elections.” Stepping in for the president while he's off throwing his own re-election rally to help Mike Pence raise money to get or keep more Mike Pences in office doesn’t sound like someone who “[tries] to stay out of politics” to me, either.

The next morning, her father tweeted his decision to ban transgender soldiers from serving. People rushed to point out Ivanka’s deafening silence on the matter — just last month she had posted a milquetoast set of Pride Month tweets proclaiming she was “Proud to support my LGBTQ friends and the LGBTQ Americans who have made immense contributions to our society and economy” to outrage and jeers, and on Wednesday those tweets were thrown back in her face as if there’s a Trump alive in possession of an ounce of shame when it comes to self-serving hypocrisy.

The Daily Beast credited Pence with pushing President Trump in the direction of a ban, and that certainly tracks with his anti-LGBT history as governor of Indiana and in the Senate. Despite their success in halting one early anti-LGBT executive order, those in the White House whom Bannon contemptuously calls “the Democrats” were, according to the Daily Beast, conspicuously silent for a reason:

The more socially liberal factions of Trump’s inner circle — including his family members and staffers Ivanka Trump and Jared Kushner — have been opposed to all the anti-LGBT initiatives of this administration. However, they quickly determined that their “political capital be spent elsewhere,” as one senior White House official characterized it, given that their advice on LGBT issues has been routinely overruled, if not overlooked, by this administration and President Trump.

Forget saving political capital; at this point Kushner's probably hoarding his. The words "collusion" and even "treason" keep floating dangerously close to his delicate head.

So yes, here is one more issue that The Mythical Moderating Influence could have stepped in on and once again did not. On Thursday a Vogue column, citing former Obama adviser Dan Pfeiffer's tweet-quip that "Ivanka might be the least influential Presidential advisor in history," told readers it was "Time, Officially and Collectively, to Give Up on Ivanka Trump."

[W]hat political capital? Ivanka Trump has displayed none in her father’s White House — and it’s time to accept that there’s a good chance she never will. To invoke the old cliché, if insanity is repeating the same actions over and over and expecting a different result, it’s time to stop expecting Ivanka will do anything meaningful with her proximity to power. It would be pointless to continue to note her silent opposition to her father’s agenda or paint her as a bastion of virtue amid Steve Bannon’s alt-right swamp. She is not going to save us, or anyone else. And she is not going to stand in Trump’s way as he scandalizes Boy Scouts, or sanctions potentially unconstitutional discrimination from the Oval Office.

I can't believe there are still liberals and progressives out there who need to be told that Ivanka doesn't carry their best interests in her heart every day at work, but OK. It's true that Ivanka has publicly flexed little to no political muscle in her father's White House. She's stood by while issues and people she once claimed to care about — including Planned Parenthood, climate science and the LGBT community — have been trashed by this administration, and there's been every indication that will continue to happen. What specific promises has she made to the LGBT community, anyway? If Donald Trump, who has probably never even thought about transgender soldiers let alone held an opinion on them, is comfortable ditching his "cosmopolitan New Yorker" values when it's politically expedient, why wouldn't his daughter, too? In any case, Ivanka Trump didn't get to where she is by taking on the Old Man directly, and she knows what happens to employees who fall out of favor. Blood might be thicker than W-2s, but even a daughter can be sidelined, and even fired. But if this most recent episode was the last straw for you, thanks for catching up.

At this point, we should be more interested in what terrible ideas she's affirming for her father that don't track with who she claimed to be before this year, the decisions she doesn't want to take credit for, the ones that play well with Trump voters, not Jared's former classmates. Let's start with anything else she might do to help Republicans running in the 2018 elections, where Democrats will try to flip as many seats as possible despite the uphill battle gerrymandered districts present. As I pointed out the last time this happened, Ivanka’s long game in the White House has nothing to do with what a bunch of liberals on Twitter think about how she exerts her influence. People on either side of the aisle who remain horrified by Trump and the gang of colorful thugs who make up his inner circle keep forgetting that every time Ivanka has had the opportunity to act like the New York Democrat Steve Bannon says she is, she’s picked the party of Trump instead.

And the party of Trump is still the Republican party. Gotta dance with the ones that brung ya, after all. While Ivanka might have ridden into Washington with one plan — make some attempts to pass a parental leave plan while promoting her personal brand — she’s had to adjust quickly to her new reality as "SNL" joke and persona non grata among the wider socially liberal world. If she decides to play Serena Joy to the GOP's Gilead Bros now, well, it wouldn't be the first brand makeover she's had a hand in.

Because there’s no going back to the naïve early days when people who identified with Ivanka and Jared by virtue of their appearance, educations and visible distaste for Bannon hailed the two as their stealth liberal saviors inside her father's snake pit of a White House. Jared’s a meme; Ivanka is a joke, not to mention an object of scornful pity for her sad attempt at writing an authoritative career book for women. But that doesn't mean she's harmless. She's seen the future, and it's not likely to include any more lunches with Cecile Richards. Has Ivanka decided to ride with Mike Pence instead? If Nordstrom doesn’t want her anymore, maybe Cracker Barrel will.