Twitter's moderation problem and liberalism's problem are one and the same

Dissenting opinions are fine — but how do you be inclusive of those who want to oppress (or annihilate) you? 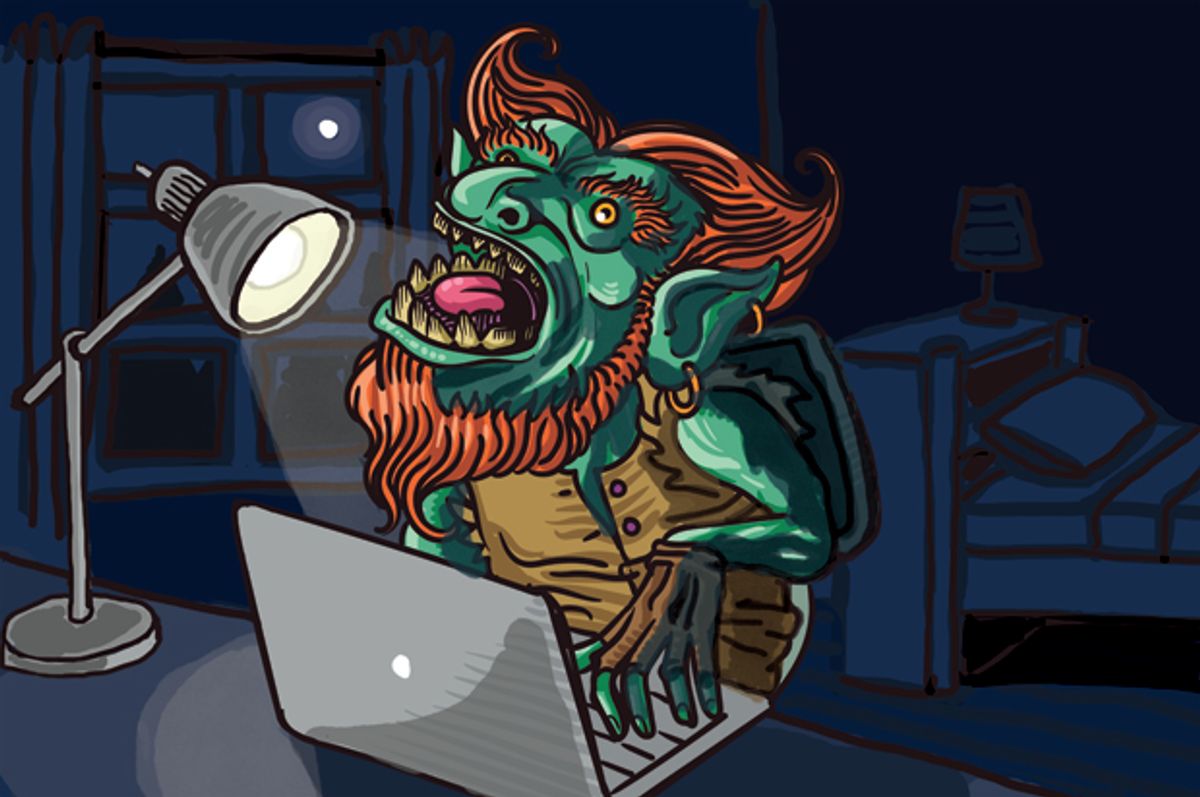 Like all great op-eds, this one starts with a direct-to-video children's film. That would be "The Land Before Time III," released in 1995 and the third entry in the series that began with the 1988 film produced by George Lucas and Steven Spielberg. As with many children's films, this one has a moralistic message about bullying, and why one should turn the other cheek. First, the physically larger dinosaurs sing a song, "When You're Big," about the virtues of might over right. "You can do anything you want to do… you can push all the little ones around," they sing, in an admittedly pretty accurate description of American foreign policy. The liberal counterpoint to this song is provided by the protagonists, whose song, "Kids Like Us," defends the confused emotional state of the larger, bullying dinosaurs: "They're louder and they're stronger / And they make a bigger fuss / But way deep inside I think they're kids like us."

In the 2002 book "Welcome to the Desert of the Real," Slovenian pop philosopher Slavoj Zizek seized on this song as an example of the shortcomings of "hegemonic liberal multiculturalist ideology." (Say what you will about the controversial thinker, but the man knows his second-rate straight-to-video children's films.)

"The answer of the small oppressed ones in the following song is not to fight the big ones, but to understand that, behind their bullying exterior, they are no different from us — secretly afraid, with their share of problems," he writes. "The obvious conclusion is therefore the praise of differences." Problem is, the metaphor doesn't really make sense in the dinosaur world: some dinosaurs are prey, and other predators, and their situation is clearly irreconcilable no matter how much empathy you extend to the predators. Analogizing to humans: "'It takes all sorts' — does that mean nice and brutal, poor and rich, victims and torturers?" Zizek writes.

The fundamental problem with "The Land Before Time III" — that it celebrates the diversity and inclusion of all dinosaurs, and yet some dinosaurs must kill others in order to live — is the same fundamental problem with social media. The social media giants, sites like Twitter and Facebook, have repeatedly expressed their commitments to these liberal values: diversity, inclusion, safety and freedom of expression. "Our goal is to instantly connect people everywhere to what is most meaningful to them. For this to happen, freedom of expression is essential," wrote Twitter co-founder Biz Stone in a 2011 blog post. "Some Tweets may facilitate positive change in a repressed country, some make us laugh, some make us think, some downright anger a vast majority of users. We don't always agree with the things people choose to tweet, but we keep the information flowing irrespective of any view we may have about the content."

In essence, Twitter says it wants to bring together dissenting views. That's "hegemonic liberal multiculturalist ideology" at its finest: advocating for an inclusive world. But there's a big difference between having a dissenting view from someone else, and wanting to oppress (or annihilate) that person.

Indeed, Twitter has perhaps had the greatest struggle with juggling its commitment to free expression and the so-called free speech of racists and sexists. (I say "so-called" because, of course, as private platforms, they are not obligated to provide free speech at all — they just do so because they want to encourage people to use their platforms as much as possible, so they make more money.) Unlike Facebook, which hermetically seals users in their own ideological and personal communication spheres, Twitter thrives on being a more public forum, each user given a soapbox proportional to their following. Indeed, Twitter likes to think of itself as part of a larger conversation, and falls into that liberal multiculturalist ideology we talked about before — the idea that everyone, regardless of whether their ideas and politics are far from yours, deserves a space to express their opinions.

The problem with Twitter, as with most internet forums, was that when people are anonymous, they tend to behave badly — a psychological term called the "online disinhibition effect," in which "people abandon social constraints that might curb potentially embarrassing behavior once they can slough off their identity," as my colleague Matt Rozsa wrote.

To curb this, and give a sense of accountability to one's speech, Twitter created a feature called "verified" accounts — colloquially, "blue badge" accounts, for the little blue checkmark that appears next to verified users' names. Accounts that are verified have been confirmed by Twitter to be who they say they are, whether an individual or the official representative of a brand or organization, and their speech is given slightly more weight on Twitter. The company can threaten to take away your verified status if you bully or harass people, as it rightly did with alt-right troll Milo Yiannopoulos after he condoned a digital war to bully and spread nude photos of comedian Leslie Jones.

But Twitter suffers from the same contradictions as "The Land Before Time III." You can provide a forum for opinion, and dignify the famous figures on Twitter by giving their speech more weight. But what do you do about figures whose ideologies go beyond disagreement and toward hate, racism or violence? Does Twitter's inclusive liberal worldview include people who are white supremacists?

Twitter's answer to this question is yes. There are a number of white supremacists with "verified" status on Twitter — including American Renaissance magazine, which bills itself as "America's premier source for race-realist thought"; Richard Spencer, a writer who works for a white nationalist think tank; and "Wife with a Purpose," a blogger who advocates for "white culture." These are but a few examples.

There's a disconnect here; how do you make a platform like Twitter inclusive, embodying the diverse and multicultural aspects of liberal society, and still include and give more weight to those with despicable views? It doesn't add up. You can't promote a normalized vision of a liberal inclusive society while including those who hate the idea of a liberal inclusive society, and who want to kill certain groups within it. It's like putting penicillin in your yogurt culture.

American liberals are currently stuck in this same trap. When Richard Spencer was punched on a public street earlier this year, a scene caught on video, many citizens of our fair liberal democracy protested. "Spencer holds truly reprehensible views, and he deserves less of the media's attention," wrote Robby Soave, an editor at libertarian Reason magazine. "But he doesn't deserve what he got today. Violence is never okay, no matter how despicable its target." (Kind of odd given that the U.S. literally fought a "violent" world war against an Axis that shared Spencer's views, but whatever.) Both the Nation and Newsweek also published anti-Nazi punching articles as well.

Here's the problem: Richard Spencer, and many of his followers, wouldn't extend the same courtesy to the "nonviolent" writers of the Nation and Newsweek and Reason. Richard Spencer told the Atlantic that he does "believe that there's a state of exception . . .  where we can use violence." Remember the lesson of the "Land Before Time": it doesn't really matter how much empathy you show toward the T. Rex if it's just going to devour you later.

Unlike these debates over free speech of Nazis, Twitter's contradictions don't have as much to do with free speech: Twitter is not a public forum, but a private one, as it is controlled and moderated by a corporation. They have no need to keep hate on their site; after all, they brag openly about "combating violent extremism," even if their execution is selective.

Twitter's politics are complicated, muddled by the profit motive and the need for more users and eyeballs. Ultimately, they want to give the impression of free speech without actually giving it, and to do so in a way that is in line with most Westerners' ideas of "acceptable discourse." ISIS is not part of that; "race realism" is, apparently. That's Twitter in a nutshell: a platform that gives a patina of inclusivity without actually being inclusive; a platform that has the dint of proffering "free speech" without really fighting for that either.

But there's one more reason Twitter isn't deleting the verified white nationalist accounts, and that's money. You looking at tweets makes them money — they're selling your eyeballs to advertisers, after all — and now that these kinds of alt-right and overtly fascistic Twitter accounts have dug in and attained millions of collective followers, the company is likely cagey about suddenly cutting out that source of eyeball profit. Money trumps social values every time. And as I've written before, eyeballs are eyeballs, regardless of whether they're full of tears — or hate for that matter.

Silicon Valley has long been renowned for being a hive of social liberalism. Long ago, the Bay Area's hippie culture trickled into the computing world, and early internet pioneers saw cyberspace's potential to realize the hippie dream of a world defined by free expression and inclusivity, where people could be whomever they wanted, unfettered by repression or government control. Yet the early 'net pioneers could not have anticipated how creating spaces for truly free speech would lead to forums where millions of cyber-citizens promote and spread hate, pursue mindless conspiracies and advocate for authoritarianism. This is a bug they can't easily patch.