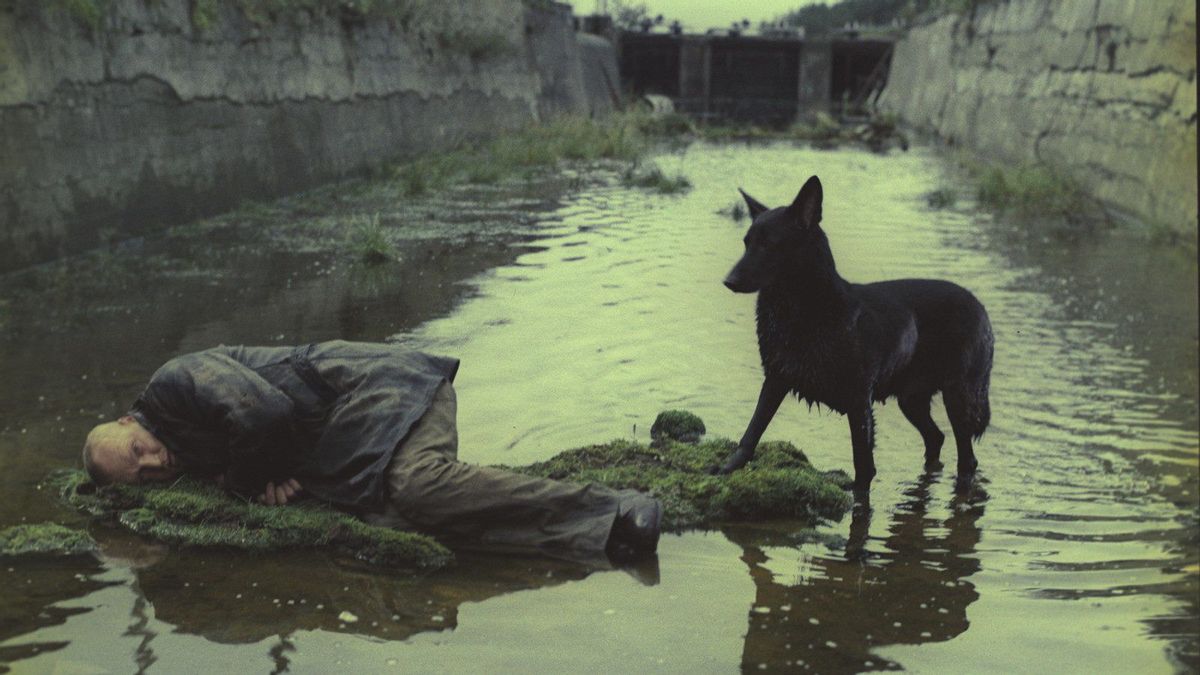 The best story about a famous filmmaker is the one Mel Brooks tells about Alfred Hitchcock in which, seated at his regular booth at Old Hollywood eatery Chasen’s, the Master of Suspense ordered a massive supper — shrimp cocktail, two-inch sirloin, asparagus smothered in hollandaise, wedge salad, fully loaded baked potato, and two ice cream sundaes — and, upon finishing it and finding himself, somehow, still peckish, commanded the head waiter, “Do it again.”

But the second best, in my estimation anyway, concerns the Russian Andrei Tarkovsky, and the production and release of his ponderous, profoundly beautiful 1979 masterpiece “Stalker,” (recently re-released on home video courtesy the Criterion Collection, and appearing in remastered edition in repertory and art house cinemas across the continent). Upon receiving a note from the Soviet State Committee for Cinematography that the film was too dull and slow, and so risked alienating viewers, Tarkovsky responded in kind, “The film needs to be slower and duller.”

It’s an almost parodic example of the film director as controlling, micromanaging tyrant. “The film is dull,” offers the gormless government bureaucrat. “THE FILM MUST CERTAINLY BE DULLER!” barks the all-knowing auteur, through one of those old-timey director’s megaphones. More than merely comic, Tarkovsky’s defiance articulates “Stalker”’s brilliance. “Stalker” turns boringness on its head. Even the word — boring — becomes less of an insult or dismissive descriptor than a point of obstinate pride. “Stalker” is dull, ponderous, tedious, dreary. “Stalker” is spectacularly boring. And it’s for precisely this reason that its reentry into the culture feels opportune.

“Stalker” is typically described as a science fiction film, yet it has little use for the broader hallmarks of the genre: robots, spaceships, lavish totalitarian dystopias, and other stock scenarios imagined as empirical extrapolations of a given society. Very loosely adapted from Arkady and Boris Strugatsky’s novella “Roadside Picnic,” “Stalker” is set in an unnamed country in a vague near-future — one of those indeterminate “not-too-distant” futures where many timeless sci-fi stories lay their scenes — the film’s opening title offers a vague premise. Aliens landed in this country. Or maybe it was meteorite. Or maybe it was something else altogether. In any event, a “miracle” emerged in the form of a sylvan pasture, referred to as The Zone. The military entered The Zone and, it’s presumed, never returned. Now the area is cordoned off by police barricades, and left uninhabited — save for the peculiar consciousness that seems to seethe through the gentle hills, creeks and abandoned infrastructure of The Zone, imbuing it with its alleged miraculousness.

The action, such as it is, follows Stalker (Alexander Leonidovich Kaidanovsky), a man armed with the know-how to lead would-be day-trippers through The Zone, and two such tourists, referred to solely as Professor (Nikolai Grinko) and Writer (Anatoli Solonitsyn). As they sneak from the unnamed, decimated town — which, with its crumbling brick facades and long ramparts of chain link fencing, all rendered in drab sepia tones, looks like an abandoned outpost in Solzhenitsyn’s conceptual “gulag archipelago” — and into The Zone, the film shifts from monochrome into color, marking the entry into this supernatural other-world within our world, like something out of “The Wizard Of Oz.” The destination of this journey is The Room: a space within The Zone where, it is believed, a person’s innermost desires can be realized (albeit, it’s suggested, usually in a cursed monkey’s paw, be-careful-what-you-wish-for sort of way). As a précis, the plot feels tight enough: three rebels smuggle themselves into an alien landscape to make their dreams come true. Where “Stalker” comes alive, however, is in Tarkovsky’s formal depiction of this long, ambling journey.

In his 2006 book “The Way Hollywood Tells It,” David Bordwell estimates that the average shot length of contemporary motion pictures ranges between four and six seconds. Modern blockbusters contain (again, on average) anywhere between 1,250 and 3,000 shots, the idea being that the acceleration of images and visual information will itself provide a sense of pace or excitement. (The effect of such quick-cut visual chaos — as anyone who has been nauseated watching a Michael Bay “Transformers” film, where the shots seem to change very 40 frames — can prove dizzying, even nauseating.) “Stalker,” by comparison features only 142 shots across 163 minutes, with an average shot length of one minute and eight seconds, and many takes running four to five minutes. Tarkovsky is effectively expanding the language of cinema itself, drawing out time to the point where the viewer becomes aware of its passing. In “Zona: A Book About a Film About a Journey to a Room,” the critic Geoff Dyer describes “Stalker” as “a literal journey that is also a journey into cinematic space and — in tandem — into time.” The result is alternatingly hypnotic, lulling, restless and, yes, just plain boring.

The very idea of deliberately making a movie boring feels radical. Movies are, after all, generally conceived of as diversions from the humdrummery of every day life; as escapes from, or antidotes to, boredom. “Boredom is the root of all evil” writes Søren Kierkegaard in “Either/Or,” diagnosing our aversion to the condition of being bored. “The influence it exerts is altogether magical, except that it is not the influence of attraction, but of repulsion.” What he means is that boredom’s power is negatively configured. We’ll do anything — binge-watch a so-so TV series, compulsively swipe across iPhone screens, mix and mingle with people we barely like — in order to steer clear of the absence of stimuli. As a cultural value, boredom means big trouble, idle hands being the devil’s playthings, and all that. To deliberately draw oneself into boredom seems counterproductive, almost perverse.

“Boredom is really about that connection between me and the world,” said John Eastwood, a clinical psychologist who heads York University’s “Boredom Lab” in Toronto, in a CBC Radio documentary that aired earlier this year. “When we're bored. we're disengaged. That connection between us and the world breaks down.” People will do anything to stave off that breakdown. An experiment conducted at the University of Virginia showed that some participants preferred voluntarily shocking themselves with electric currents over sitting in silence, alone with their thoughts, bored, for 15 minutes. (One especially masochistic participant in the test group shocked himself an impressive 190 times.) Comedian Louis CK has railed against boredom; as has Donald Trump, who once defended his vulgar behavior on the campaign trail by telling a rally, “I could be presidential. But if I was presidential, well, only about 20 per cent of you would be here because it would be boring as hell.” Dullness and disengagement are problems to be solved. Boredom is the enemy.

There’s a push, in certain quarters, against boredom as some cultural bogeyman or pale, blah-beige lamprey set to pounce upon us the moment we drift into idleness. The so-called “science of boredom” (a field presumably reinvigorated by our culture of acceleration and distraction) is trying to reorient this. A recent pop-psychology book by Dr. Sandi Man called “The Upside of Downtime” made a case for utility of boredom, arguing that can it catalyze creativity. It’s an idea that goes at least as far back as old Kierkegaard, who writes that “The gods were bored, and so they created man. Adam was bored because was alone and so Eve was created . . . then Adam and Ever were bored together; then Adam and Eve and Cain and Abel were bored en famille; then the population of the world increased, and the peoples were bored en masse.”

Boredom is often viewed, in this sense, as a call to action: a necessary pre-condition to doing something not boring. To wit: Tarkovsky drastically reconciled of the Stalker character, changing him from a petty post-apocalyptic flimflam man to a deeply spiritual wayfarer, during a long delay in the film’s production, beset as he was by inactivity, boredom, and a generalized inertia.

The boredom of “Stalker” has a different flavor. The film’s long takes, its protracted stretches of characters stamping around a field, exchanging parables and barbed witticisms, pausing to nap, its ostensible monotony do not really exist in service of something else. Instead, Tarkovsky wants the viewer to encounter boredom in itself, as an experience, a condition and a state of mind. Because it is from boredom and inattention, that greatness springs. In the liner notes of Criterion’s new blu-ray package, Mark Le Fanu describes the Strugatsky bros.’ source book as a hard-edged genre piece. “Yet hovering beneath the surface,” Le Fanu writes, “one can discern a difficult-to-define tenderness of outlook.” The same holds true for Tarkovsky’s adaptation.

Le Fanu’s phrasing is curious. Typically things are said to hover over other things, as hydrofoil may be said to hover above the miry waters of a Florida swamp, or Criss Angel, festooned in pewter jewellery and dense coils of bandanas, hovers an inch above a sidewalk on the Las Vegas Strip, for the amusement of some easily-amused tourists. Things don’t usually hover under. Underneath things are more likely to teem or coil or seethe, like those chittering bugs at the beginning of “Blue Velvet.” The underneath is gritty, ugly, hostile, nurtured by decomposing dead things and other stuff best left unseen. Not in “Stalker.” Midway through the film, when Stalker prays for the pliancy necessary to make it through his journey, he looks not towards the heavens but down into a well, into the depths of the earth itself. In “Stalker,” the landscape itself offers a faint promise of our innermost desires registered in mundanity.

For Tarkovsky, boredom and the undistracted contemplation it encourages, doesn’t cause a disconnect, but rather a way of communing with this immanence inherent in the present. As Geoff Dyer writes in “Zona,” “This is not like the flashing psychedelic rhetoric — ‘Beyond the Infinite’ — of the closing phase of ‘2001’; this is strictly within the finite.” “Stalker” is about its characters (and its viewers) succumbing to the ambiguity and abstruseness of its drawn out moments, to accept that ambiguity, and to construct their own meaningful relationships with the world. (“Ambiguity is richness,” Borges wrote.) Indeed, it is a film where human consciousness and attitudes shape physical reality — or at least the shifting landscapes and expanding, contracting accordion temporality of The Zone — itself. “Stalker” abounds with moments of baffling beauty and philosophical heft within its vast finitude, in which the seeming mundanity of the action casts moments spiritual and philosophical rapture further into relief.

It’s a film that challenges us to be bored, while refusing to be boring. And it’s a film that reveals more and more of itself on subsequent viewings, inviting obsession, and rewarding and punishing it in equal measure. “Stalker” hails the modern viewer, overstuffed from binging smorgasbord of decadence and distraction, to square off against the enemy of boredom. And, having done so, it invites them to revisit the mysteries of The Zone, petitioning the late Tarkovsky in hushed tones, chastened, almost prayerful, “Do it again.”