A Nebraska-sized area of forest disappeared in 2015 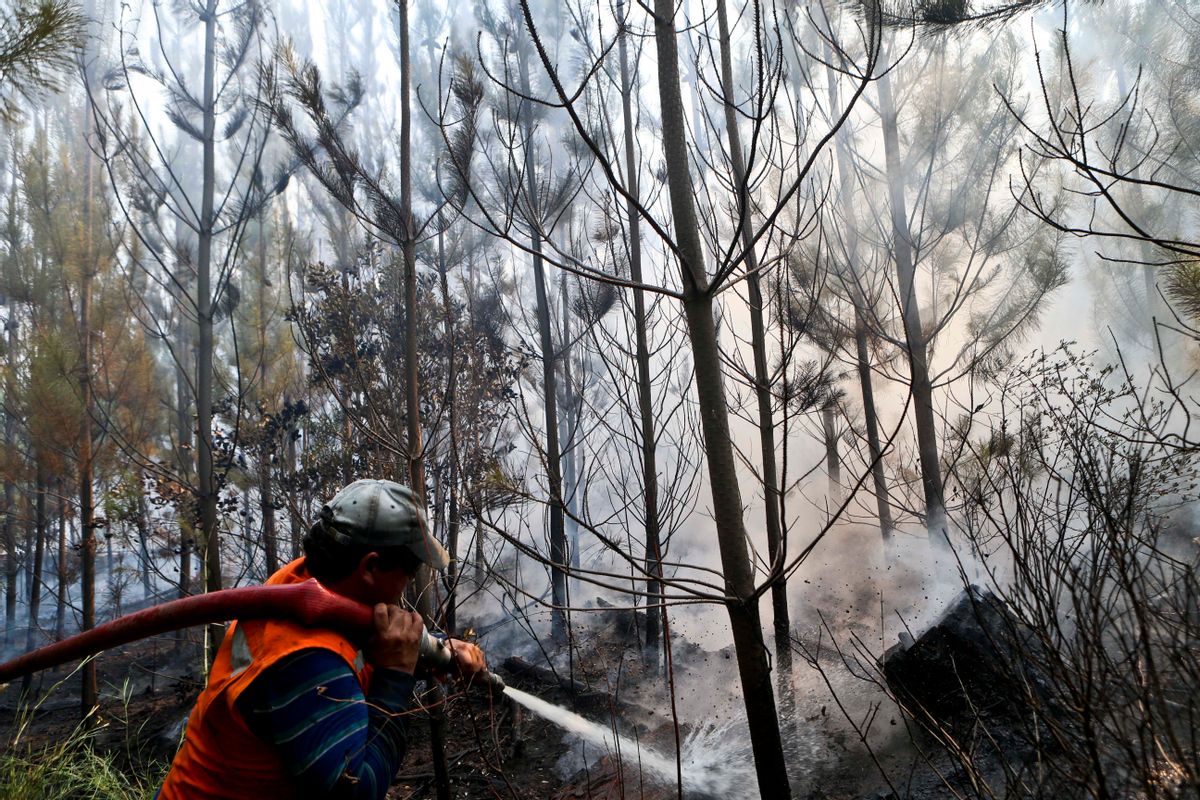 A Nebraska-sized chunk of the world’s forests was decimated in 2015 because of wildfire, logging and expanding palm oil plantations, according to a new study. The loss is part of a continuing trend of deforestation that could have devastating implications for the climate.

About 49 million acres of forest disappeared worldwide in 2015, mainly in North America and the tropics, putting the year’s global deforestation level at its second-highest point since data gathering began in 2001. In all, the globe lost 47 percent more forested land in 2015 than it did 16 years ago, according to the study by Global Forest Watch.

Deforestation accounts for more than 10 percent of the global carbon dioxide emissions driving climate change. Dense tropical forests are also critical to keeping the climate stable because they suck up large amounts of human carbon pollution from the atmosphere, storing it in tree trunks, leaves, roots and soil.

Using satellite data provided by Google and the University of Maryland, Global Forest Watch researchers measured the death or removal of trees at least 16 feet tall.

2014 was a record-breaking year for tree-cover loss when nearly 60 million acres of forests disappeared. 2015 saw less, but it’s too soon to say whether deforestation is truly on a downward swing because of uncertainty in some of the data, study co-author Mikaela Weisse, a research analyst for Global Forest Watch at the World Resources Institute, said.

For example, Canada, Russia and the U.S. saw the most forest cover loss in 2015, mainly because of wildfire, pest infestations and commercial logging. But the study says the actual level of forest loss in those countries is difficult to determine because there is insufficient available data on logging and natural tree re-growth.

It’s unclear exactly how much carbon dioxide was released into the atmosphere from deforestation in 2015 because the organization has not completed a study of climate pollution related to forest loss, Weisse said.

Canada, Russia and the U.S. — among the most heavily forested nations on earth — are routinely among the top countries losing the most forestland because of their large size, large temperate forests and frequency of wildfire, Weisse said.

Weisse said she is most concerned about man-made deforestation in the tropics, where human-caused destruction of dense, carbon-rich forests is rising quickly. Papua New Guinea, for example, saw a 70 percent increase in tree cover loss due to deforestation for palm oil plantations and logging — more than any country on record.

Indonesia and Papua New Guinea saw massive wildfires in 2015, contributing to major tree cover loss there. The wildfires consumed parts of Borneo, Sumatra and the island of New Guinea, scorching large swathes of jungle during a significant drought brought about by a major El Niño event in the Pacific Ocean, which was one of the strongest on record.

The wildfires had a significant impact on the climate because of the carbon dioxide released into the atmosphere as the dense forest incinerated, said Aidy Halimanjaya, a deforestation consultant for the Indonesian government and a climate change finance researcher who is unaffiliated with the study.

She said she Indonesia will continue to see major wildfires unless the government finds a way to manage the landscape more sustainably.

One bright spot in the study is Colombia, where the deforestation rate has fallen 50 percent since its peak in 2007. The study says there is no consensus on why deforestation has slowed there, but Colombia’s government has committed to reaching zero net deforestation by 2020.

Many countries have taken steps to stop deforestation, but the study shows that those efforts have not been enough to slow it down, said Gustavo Silva-Chavez, a project manager for Forest Trends, a U.S.-based nonprofit, who is unaffiliated with the study.

Brazil, for example, saw its carbon emissions from deforestation fall by 80 percent between 2003 and 2015.

“That was huge,” Silva-Chavez said. “Unfortunately, in the last two years those emissions are going up. Despite our best efforts, emissions are still increasing.”

If the deforestation trend continues, it will become increasingly less likely that countries will stop global warming from exceeding 2°C (3.6°F) above pre-industrial levels — the primary goal of the Paris Climate Agreement, he said.

“If emissions from forests stay the same or increase, there’s no way to avoid dangerous climate change,” Silva-Chavez said.