Trump's foreign policy: Bizarre and inconsistent, or more strategic than we think? 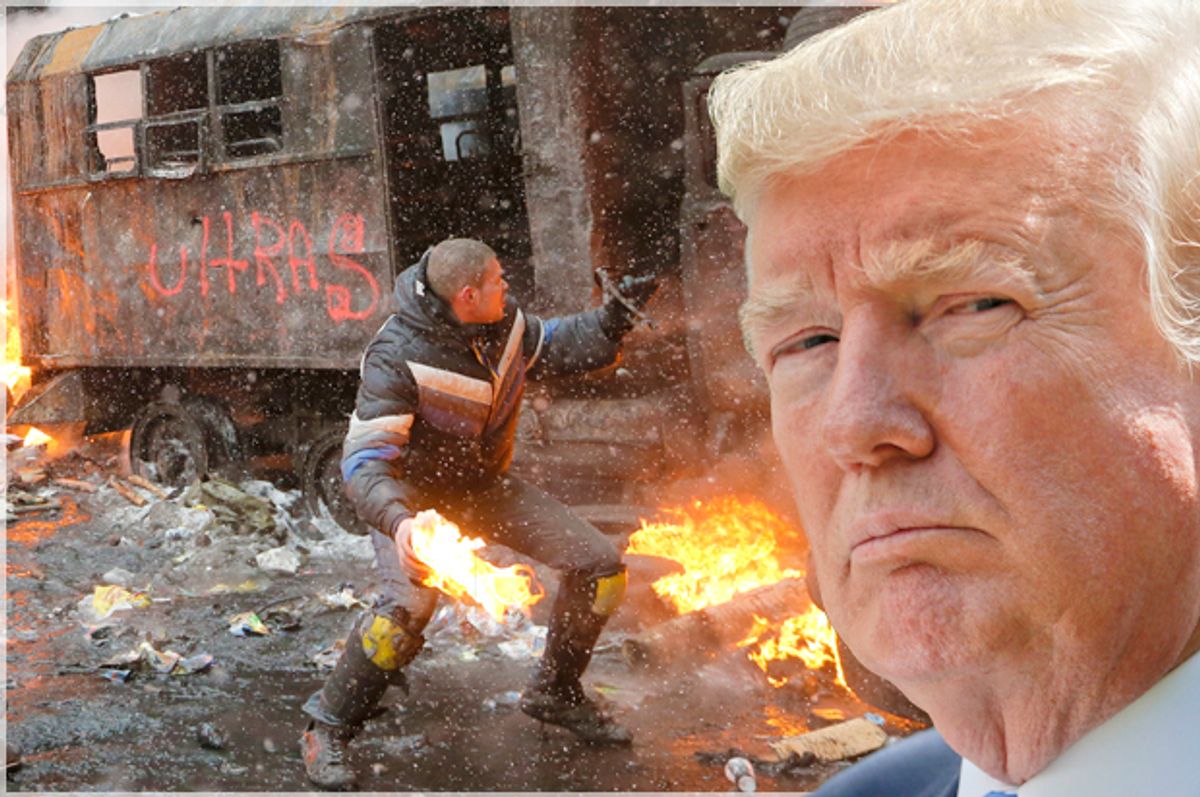 When Trump administration officials announced an end to the covert CIA program to arm and train Syrian rebels in their fight against Syrian President Bashar al-Assad, many framed it as a win for Russia — and while it was indeed something Russia had been seeking for years, it also, more importantly, made sense.

For years, this “secret” effort to aid rebels against Assad had been openly reported. The program enjoyed a budget of up to $1 billion per year — yet it had achieved absolutely nothing. It only helped prolong the war and actually aided groups like al-Nusra (al-Qaida’s Syrian affiliate) and ISIS by allowing arms meant for “moderate” groups to enter into their hands instead.

Despite the effort ending in abject failure, much of the media reporting painted the decision to end this scheme as a catastrophe — simply because it also happened to benefit Russia (which supports Assad against the rebel forces).

Rather than viewing this decision as a win for Russia, it would have been more useful to see it, in the words of Century Foundation analyst Sam Heller, as “a concession to reality” — an end to wasteful, useless spending that was not in any way vital to U.S. national security. A separate but similarly useless Pentagon program, aimed at training Syrian rebels against ISIS, spent $500 million to train “four or five” fighters. That program also saw “moderate” rebels surrender at least one-quarter of their weapons to al-Qaida affiliates.

But while ending the CIA program was a move that made thorough sense, it was also bewildering in light of other recent decisions made by the Trump administration on Syria.

Officials told the Washington Post that the decision to stop arming the anti-Assad rebels came more than a month before making it public. That puts the decision back to somewhere in mid-June. Two months before that, Trump was singing an entirely different tune when he ramped up his criticism of Assad and ordered a multiple-missile strike on the Shayrat airbase in response to reports of a chemical weapons attack blamed on Syrian government forces.

This kind of confusing and erratic foreign policy isn’t surprising from Trump. He has been on both sides of most issues at one point or another.

Interestingly, one official was quoted by the Post as saying that the most recent decision on Syria was designed in part as “a signal to Putin that the administration wants to improve ties to Russia.”

Why then, just a week later, did the new U.S. special envoy on Ukraine, Kurt Volker, announce during an interview in Paris that the U.S. was now considering sending weapons to the Kiev government, which could be used against pro-Russian rebels in the breakaway eastern regions of the country — a move that would undoubtedly undo any Moscow goodwill resulting from the decision to stop arming rebels in Syria?

Even choosing Volker, a Russia hawk, as special envoy on Ukraine sent a message to Moscow that Trump’s administration may be looking at taking a harder line on Ukraine. Trump’s own words in Poland not long ago about Russia’s “destabilizing activities” in Ukraine suggested the same thing.

Volker argued that what was needed was “more U.S. involvement and engagement” in Ukraine — which is interesting, because all this is the antithesis of Trump the candidate’s position on Ukraine. In one campaign interview, Trump wondered why the Obama administration seemed to be “leading the charge” in Ukraine when it was a problem for Europe to deal with.

Volker argues that sending weapons to Kiev would not stir up tensions or “change the balance” in any significant way. The weapons would simply allow Ukraine's government to defend itself in the face of aggression from the east, he said.

How Ukrainian President Petro Poroshenko would likely act in the event of receiving direct support and arms from the U.S. is cause for worry. In January, German newspaper Süddeutsche Zeitung reported that some in government circles in Berlin believed Poroshenko had been deliberately aggravating the situation in his country in an effort to prevent Trump from pursuing better relations with Moscow. Proof of this lay in a creeping advance on the town of Avdiivka by Kiev’s forces — and a subsequent effort to lay the blame solely on the separatists, while maintaining the government's innocence.

Ukraine’s deputy defense minister blew the lid off that narrative when he told Ukrainian media: “As of today, despite everything, meter by meter, step by step, whenever possible, our boys have been advancing.”

It is unrealistic to think that support and weapons from the Trump administration would not increase tensions in Ukraine and irritate an already complicated situation. Throwing new weapons at the problem is no solution.

One of the major problems preventing progress in Ukraine is Kiev’s inability to implement what it committed to under the Minsk agreements: granting some autonomy to the breakaway regions in the east in exchange for those territories returning to Ukrainian jurisdiction after elections are held. But with political factions in Kiev arguing forcefully for terms not agreed to under the Minsk agreement -- and ultra-nationalist battalions, bitterly hostile to Russia, that act largely outside Poroshenko’s control -- fulfilling the terms of those agreements is not as simple as it might sound.

When separatist leader Alexander Zakharchenko announced the creation of a new "state" of Malorossiya ("Little Russia") in eastern Ukraine earlier this month, the Russian government insisted it wasn't involved and wasn’t interested. Moscow called this decision Zakharchenko’s “personal initiative” and restated that Moscow favored resolving the Ukraine crisis through the Minsk protocol.

As one columnist put it, sending arms to Kiev now could be seen as “a full revision of the Minsk agreement in order to force Russia to comply with Ukrainian demands” by raising the cost of continued conflict for Moscow.

That may be true. Only a month ago, Secretary of State Rex Tillerson said that he did not want the U.S. to be “handcuffed” to the Minsk agreement if Ukraine and Russia could come to an agreement through “some structure other than Minsk.”

It is unclear if Tillerson had something specific in mind, but if Trump has decided that Ukraine will be the arena where he will pursue a harsher line toward Russia, it's important to remember that Moscow does not see the Ukraine conflict in a vacuum. From the Russian perspective, it is part of a broader problem — that of an imbalanced security system in Europe, in which Moscow fears that post-Soviet states like Ukraine are being gobbled up by NATO, which is regarded by the Kremlin as a hostile military alliance at its borders. It is not reasonable to assume that any amount of arm-twisting will lead Putin to back down when it comes to what he perceives as Russia’s own backyard.

It is increasingly difficult to make sense of Trump’s foreign policy. One minute he makes overtures toward Russia in Syria and the next he mulls a plan that would open a massive can of worms in Ukraine, all but destroying hopes for any kind of détente with Moscow.

Unfortunately for Kiev, there is no guarantee that this is the direction Trump will take when he’s done thinking the situation over. Just last week, he was ranting on Twitter all over again about Ukraine’s supposed efforts to sabotage his campaign and work to have Hillary Clinton elected. At this point, what Trump will do in Ukraine is a toss-up. It could all come down to how angry he is about the fact that Kiev liked Clinton more than him. At the same time, he is torn between his own desire to develop a friendly relationship with Putin and a need not to appear in any way subordinate to him on the world stage.

Maybe the haphazardness and mixed messages that characterize Trumpian foreign policy are part of a grander strategy we cannot yet perceive — or maybe they are indicative of an administration that can’t even manage itself, never mind complex international conflicts.