Weaving architecture, history and social justice together, Chicago is imagined anew in "No Small Plans" 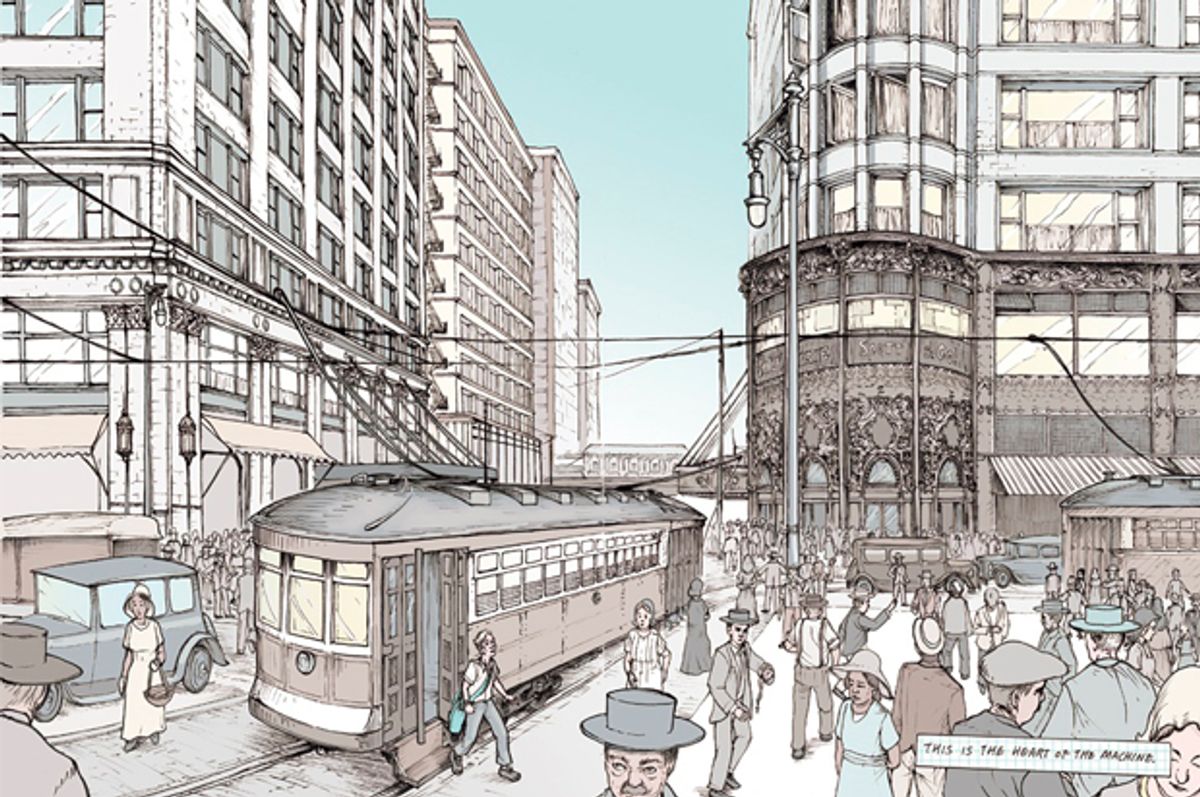 Many comics are socially conscious, from the feminist sci-fi of “Bitch Planet” to the frightening dystopia of “Lazarus.” Many other comics skip through time. Perhaps the best recent example is Jason Aaron’s “Thor” run, which has featured hot-headed and dopey young Thor, familiar and grounded Avengers Thor, and bitter and defeated old Thor. But a new graphic novel takes time-hopping and socially conscious comics in a brand-new direction.

“No Small Plans” isn’t the latest offering from Marvel, DC or Image, but it is a sign of how comics are a populist medium that can spring up anywhere. This graphic novel — written by Gabrielle Lyon and illustrated by the Eye of the Cat Illustration team of Devin Mawdsley, Kayce Bayer, Chris Lin and Deon Reed — will be published this August by the Chicago Architecture Foundation as a culmination of their “Meet Your City” initiative. As part of the initiative, 30,000 copies of the graphic novel will be given to Chicago students in grades 6-10 over the next three years. The product is a gorgeous and thought-provoking call to action. Other cities looking for ways to engage teens in building a better city (and world) should take this project as a model.

“No Small Plans” follows three groups of teens through three periods of Chicago history set in 1928, 2017 and 2211. Among other young protagonists, the 1928 story features Reginald Williams, a paperboy (and budding journalist) for the Chicago Defender, an influential African-American newspaper founded in 1905. The 2017 story includes Natalie, a Hispanic girl whose family is being forced out of the Logan Square neighborhood by condo developers. The comic goes futuristic for the chapter set in 2211, showing a world experienced mostly through virtual reality, in which another group of diverse teens learns the importance of seeing other neighborhoods with their old-fashioned eyeballs.

All three stories revolve around a statement written in the notebook of Williams: “. . . a city is both its architecture and its people.” Racism, gentrification, apathy and ignorance are obstacles the teens in each era fight as they ask a question with no simple answer: “How might we build in ways that unite us?”

The urgency of that question is heightened in the interludes between chapters, featuring Daniel Burnham, who conceived “The Plan for Chicago” in 1909. Burnham’s plan led to the 1911 textbook that “No Small Plans” emulates: “Wacker’s Manual,” which Chicago Public School eighth graders read for nearly thirty years. In that spirit, the final Burnham interlude offers a direct invitation to readers to plan their own city. For anyone exhausted by the endless nightmare of national politics, this focus on the local should be refreshing and inspiring.

Chicagoans — or anyone who’s been to Chicago — will flip for this book. As writer Gabrielle Lyon notes, “Chicagoans will recognize many of the places and buildings in the novel — everything from the Wrigley building and Chicago Defender to iconic locations like Ida B. Wells' house in Bronzeville to Daniel Burnham's gravesite in the Graceland Cemetery. I think what might be most satisfying and endearing is the vernacular architecture, the ordinary things that are familiar to so many of us —bungalows, three-flats, alleys, bridges and glimpses of the lake.” Those particulars also have a universality. No matter where you’re from — city, suburb, village or town — you know the pains and possibilities of that place.

Main artist Devin Mawdsley — whose work is highly detailed and should appeal to fans of artists such as Geof Darrow, Frank Quitely and Chris Burnham — said the biggest challenge in producing the graphic novel was time. “Being a part-time teacher, work on the book was squeezed into the morning and late night hours. It was challenging and interesting co-constructing the narrative with Gabe, Chris, Kayce and Deon. The collaborative nature of the project was both stimulating and demanding.”

Indeed, this was an unusual collaboration involving more hands on deck than most comics. Lyon describes the lengthy process: “CAF developed a detailed ‘design brief' over the course of nine months by asking planners, architects, educators, teens and community organizations ‘What's most worth knowing and experiencing when it comes to urban planning and civic engagement?’ We used this brief to announce a call for Midwest artists to submit concepts for a new graphic novel that would address Chicago's past, present and future, Chicago's architecture as a character, youth as having agency, and grit and shine.”

The teens then helped select the artists. One of those teens, Destiny Brady, said she evaluated the artists with an eye for “their connection to youth in the city.” Brady was pleased with the final result, saying, “The children that this team illustrated really possessed the nature of our beloved city.”

For Mawdsley, bringing “No Small Plans” to life was also part of a re-evaluation of his own work as an artist, shifting from fine art to the more populist form of a comic. “The production of fine art has become less relevant and essential for me. Our culture, nevertheless, is an extremely visual one, and the graphic novel/comics is a potent cultural force. It is story-telling for the masses, it is a medium that is rich, vibrant, imaginative and affordable. Kids love comics and adults love comics.”

The most important — and sobering — lesson may have been learned when Cristina, one of the 2017 teens, learns her parents had been part of a successful battle to keep coal plants out of Pilsen in the 1970s. The fight was a win, but it took 10 years and the combined efforts of 17 different organizations. That kind of serious citizenship is far from sexy and provides no instant gratification. But it’s a task we should all be taking on, and this inspiring book provides much-needed inspiration and fuel.

“No Small Plans” will please any fan of the medium, but if you have a teen — or even better, a classroom — this is something you need to buy, preferably in bulk. Legendary creator Harvey Pekar famously said, “Comics are words and pictures. You can do anything with words and pictures.”