Anti-abortion protesters return to confrontation and threats at Kentucky's only clinic. Will violence follow? 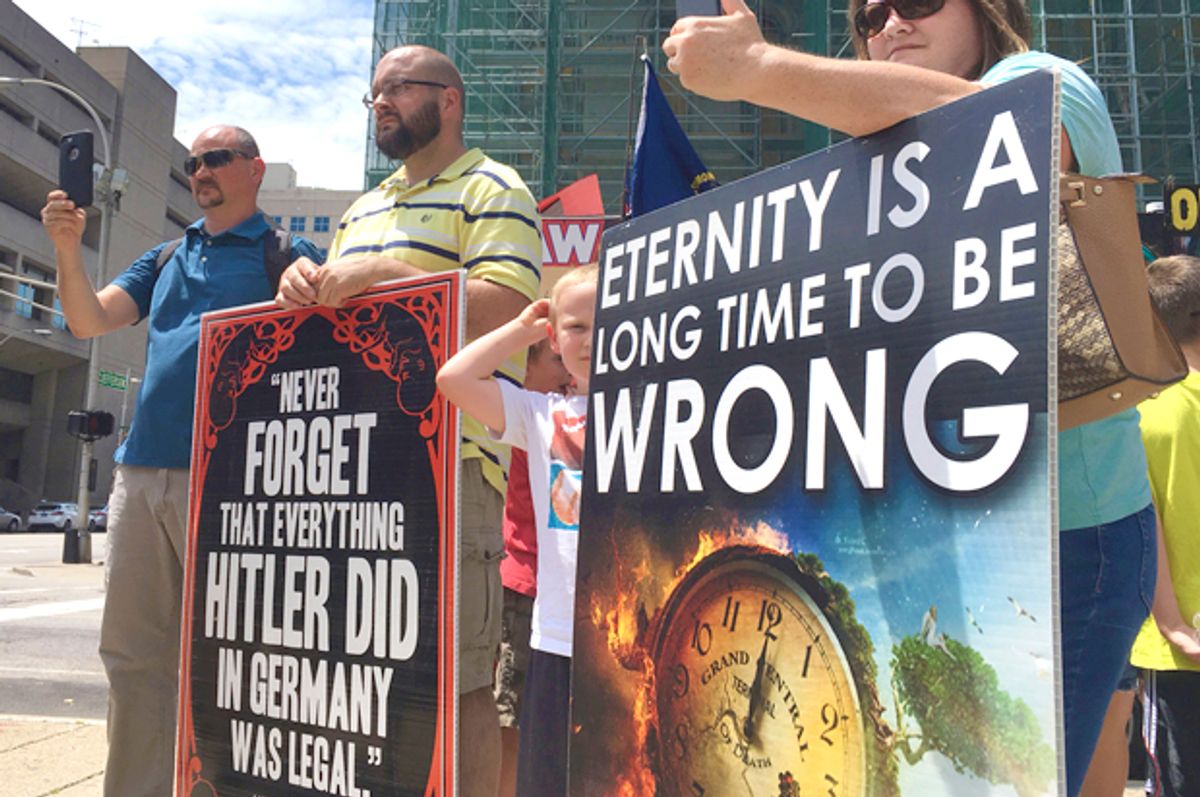 During the 1990s, the anti-choice movement escalated its tactics to physical obstruction and even violence in its efforts effort to keep women from getting their abortions from safe, legal providers. Groups like Operation Rescue and Army of God would block clinic doors and encourage violence against providers by putting up fake "wanted" posters of doctors with their names and photos. That tactic led to the murders of at least three doctors in the '90s.

These tactics never completely went away: Dr. George Tiller of Kansas was murdered in 2009 by an anti-abortion fanatic, and activist Flip Benham was convicted in 2010 for distributing "wanted" posters. But a combination of bad press and laws like the Freedom to Access Clinic Entrances Act (FACE Act) quelled some of the excesses.

But over the past year or two, there have been increasing concerns that the anti-choice movement is once again embracing more aggressive, even violent tactics. Ground zero for this shift is Kentucky, where Republicans have managed — through a series of medically unnecessary restrictions and aggressive actions from hard-line Gov. Matt Bevin, a right-wing Republican — to harass all but one clinic in the state out of providing abortions. Now a group of pushy anti-choice activists, most of whom are linked to the radical organization Operation Save America, have targeted the state's one remaining clinic, the EMW Women’s Surgical Center in Louisville.

“The rhetoric has definitely been escalating," said Christine, a clinic escort in Louisville who asked Salon not to use her last name. “These people will use signs to block folks, to block access on the sidewalk. They will call them murderers."

The Louisville clinic, Christine explained, has always faced local protesters. While all of them are there to harass women for choosing to have sex without wanting to have a baby, most, Christine said, at least try to feign altruistic motives. Either they pray endlessly or they follow patients around with anti-abortion literature and pretend to offer "counseling" to pregnant women instead of simply shaming them.

But with Operation Save America focusing in on the EMW Women's clinic over the past year, things have grown much worse.

“Amplification is standard operating procedure at this point," Christine said, noting that protesters often use bullhorns and now occasionally drag out loudspeakers, so patients have a much harder time tuning out the nonstop barrage of harassment. (Similar tactics are being used in Charlotte, North Carolina, as shown in the recent documentary "Care in Chaos.")

This shift towards more incendiary tactics and outright threats is the result of a convergence of factors. Last summer, anti-choicers lost a major Supreme Court case in Whole Woman's Health v. Hellerstedt, a decision that provoked considerable anger in the religious right. Donald Trump's election as president and his appointment of hard-line abortion foe Jeff Sessions as attorney general have been widely understood as a signal that FACE Act violations will no longer be aggressively prosecuted. The 2015 release of a series of hoax videos falsely accusing Planned Parenthood of selling "baby parts" also riled up the anti-choice community, leading one activist to shoot up a Planned Parenthood clinic in Colorado, killing three people.

In Kentucky, there has been the added incentive of Bevin's tacit approval. The governor spoke at Operation Save America's leadership meeting in February in Louisville.

In May, clinic employees and escorts saw the first sign that overt lawbreaking was back on the table for anti-choice activists when a group of protesters blocked the main entrance to EMW, forcing patients to enter through the back door. Eleven people were arrested.

In response, Operation Save America went to Facebook to call the authorities "ministers of Satan" for enforcing the law and compared those who allowed women to access abortion services to "Nazi guards" who "put Jews in ovens."

That kind of rhetoric is misleading and grotesque at any point in time, but it's doubly so when used in defense of people who are seeking to force childbirth on unwilling women.

There hasn't been a clinic blockade since then, but Operation Save America activists have threatened one, which led a federal judge to order a buffer zone around the clinic entrance over the weekend to cover the period when Operation Save America was holding its Louisville conference. While that helped keep the sidewalk clear so women could enter the clinic, the arrival of numerous radical anti-choice activists in the area has created what Christine described as a "circus" atmosphere.

“They’re playing music constantly, at over 100 decibels. They’re loud and they’re all wearing shirts and they’re all, like, with their hands out, speaking tongues," she said, adding that after all that, patients still had to walk through a gauntlet of police and federal marshals on hand to enforce the temporary buffer zone.

Videos filmed with smartphones around the clinic help capture the ridiculous character of the scene. It would almost be comical, except for the patients who must endure fanatics screaming at them for trying to visit a medical clinic. Some patients "cover their faces" on the way through the crowd, Christine said. Others have started crying. "But ultimately, it’s ineffective. Ultimately, people still walk into the door.”

There has also been an escalation of intimidation and threatening behavior towards clinic workers in Louisville. For about a year, Christine estimated, there have been protesters standing around both EMW and other clinics the doctors work at, holding up signs featuring the doctors' names and photos.

Now Operation Save America is mailing flyers around the city that feature the name, address and phone number of clinic employees. A Salon contact in the Louisville area received one at his home and sent us a screenshot.

These are the tactics that got Benham, the director of Operation Save America, convicted of stalking doctors in 2010. Whatever half-baked excuses anti-choice activists might come up with to justify this behavior, everyone with basic common sense can see the threat of violence implicit here: They're publicizing someone's home address, calling that person a murderer and suggesting that "good people" must act when the authorities don't to stop this supposed crime.

It's no wonder that Operation Save America feels emboldened to hint at domestic terrorism in this way, with the governor of Kentucky and the attorney general of the United States apparently in their corner. Anger at women for seeking autonomy and independence has been on the rise in general in recent years -- especially on the religious right -- which is part of the reason that an overt misogynist like Donald Trump was able to win the presidency. It's ordinary women making private medical decisions, as well as the professionals and volunteers trying to help them, who face the brunt of this misogynist fury.