Defining presidential deviancy down: Trump builds on Nixon and Clinton's legacy — and multiplies it

Presidents have often done sleazy things, but a toxic blend of ingredients has allowed Trump to set a new standard 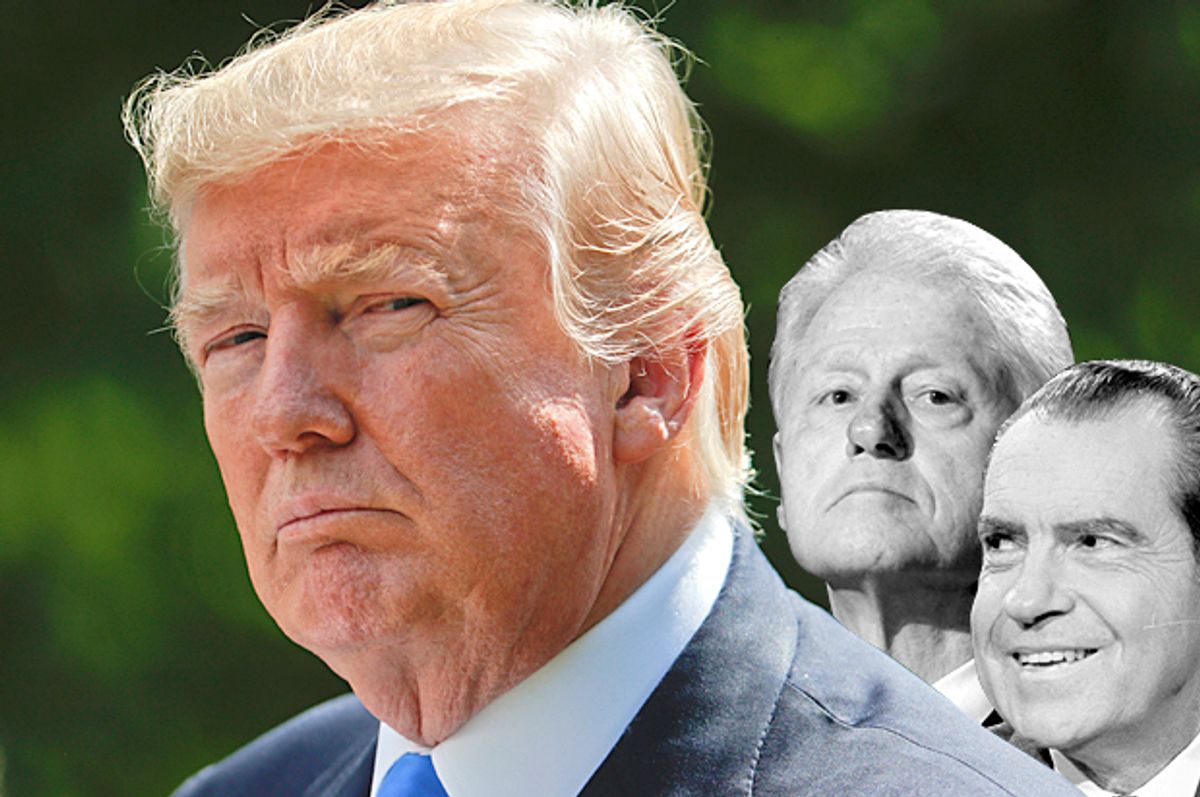 We are at the six-month-plus mark of this nation’s collective nightmare; with each passing day, the present occupant of the White House takes more air out of the overinflated balloon we call the presidency of the United States. With every crass utterance from the West Wing, the office long viewed as a sacred trust becomes more debased. We are in that sort sliding trajectory that the late Sen. Daniel Patrick Moynihan once described as “defining deviancy downward.” (His reference, at the time, was to the disintegration of African-American families consigned to poverty, discrimination and deprivation.)

It is not that previous occupants of the Oval Office haven’t done horrendous things, but at least they were masked as covert actions. Back in the day, there was the belief at the highest levels of our government that some degree of secrecy and dignity was required to protect the essential American brand -- the idea, true or not, that we stood for human rights and democracy.

Similarly, the press was once discreet about the subsequently well-documented sexual dalliances of former chief executives; the public morals and sensibility could be preserved, as long as the masses were kept in the dark about their leaders. The excesses of former President Bill Clinton brought an end to that. We have had to come to accept a lower standard of behavior -- because we know about it.  Once you know -- and lose you plausible deniability -- you either push back and call it out as unacceptable, or you readjust your expectations to match the behavior of the Oval Office occupant, as long as he or she belongs to the right party.

So we define deviancy downward. That is just about where most of the incumbent Republicans in Congress have readjusted their standards now; and they have been forced to downgrade them constantly since the “Access Hollywood” tapes surfaced (if not long before that).

To be fair, our cyberspace public square had been on this same trajectory, preparing the throne room for the current emperor.  For years after the threat of a writers’ strike spawned so-called reality television, the Kardashians and the housewives of New Jersey subsumed the national imagination.  We just couldn’t turn away or turn it off; and with every blank stare, “reality” shows consumed more of our collective consciousness until they ate our entire brain.

Now we have a thermonuclear-enabled bully in the White House, a cartoon caricature animated by millions of Americans’ resentment of the capture of our politics by the corporate establishment and “elites.” Yet under this president, corporate interests have a tighter hold on the levers of power than ever before. This is not unlike 1968, when voters flocked to Richard Nixon because they believed him when he said he had “a secret plan" to end the war in Vietnam.” Surprise! The secret plan was several more years of war, featuring the use of napalm against civilian populations and the secret bombing of Cambodia, a war crime if ever there was one. That was how the real "Tricky Dick" nickname took hold.

Donald Trump's misrule has us in a state of permanent anomie, where the erosion of standards and values gives cover to corrupt politicians of both parties and all stripes. The ever-lower bar he sets is job security for the mediocre, the ethically challenged and the purely incompetent, who at least are not afflicted with pathological narcissism and have not filled the highest ranks of the government with their progeny, something more befitting a Third World junta.

Defining deviancy downward for our public officials is not solely the fault of a greedy media that feeds off clicks, making no distinction as to whether the content is porn, hate speech, falsehoods, actual news or an amalgam of all those things. No more august a body than the U.S. Supreme Court overturned the corruption charges against former Virginia Gov. Bob McDonnell, an expert practitioner of "take whatever's not nailed down" governance. That 8-0 decision set off a stampede to every federal courthouse across the country by every political bottom-feeder who’d ever found himself on the wrong end of an FBI wiretap.

"There is no doubt that this case is distasteful; it may be worse than that," wrote Chief Justice John Roberts in the McDonnell decision. "But our concern is not with tawdry tales of Ferraris, Rolexes, and ball gowns. It is instead with the broader legal implications of the government's boundless interpretation of the federal bribery statute. A more limited interpretation of the term 'official act' leaves ample room for prosecuting corruption, while comporting with the text of the statute and the precedent of this court."

Wow, Mr. Chief Justice; down here on earth, we are choking on the tawdry. Have you met the current occupant of the White House yet? Didn't you swear him in, using a book he likely did not recognize? Is your august body not willing to give us a reprieve from the tawdry, at least at the statehouse level?  Go ahead, just keep splitting hairs about the meaning of the word “is” (or “official act”), as government corruption proliferates into a kind of open and unopposed looting, based merely on proximity. That is already underway in the White House. First, the high court gave us Gore vs. Bush, followed up by Citizens United; now, with McDonnell, you make it well nigh impossible to clean up the messes those earlier decisions set in motion.

No doubt the media, the courts, Congress and the Trump junta will all prosper. The “elites” always do, short of an old-time French Revolution. But prosperity is not likely to come to the ignored parts of America, including the 200 counties in states like Pennsylvania and the Rust Belt that voted for Barack Obama in 2008 and 2012, but went for Trump  in 2016.

While the Wall Street-controlled business press reports the national rebound of real estate, a lot of Main Streets are still hurting.  According to the Harvard University’s Center for Housing Study's annual report, released in June, home prices have declined since 2000 in 280 metro regions in the country, many of them in the Rust Belt. What’s driving that? A Main Street rush to “get out of Dodge” and a lack of new buyers from someplace else looking for a fresh start.

As recently reported in US News, Trump states like Ohio, Pennsylvania, Michigan and West Virginia continue to hemorrhage population. People there don’t have time to wait around for this president to get his act together.