Mooch out, Kelly in: Beltway swoons over another "new sheriff in town" — but don't get too used to him either

D.C. pundits can't resist a man in uniform — but there are already signs John Kelly won't last long in Trumpworld 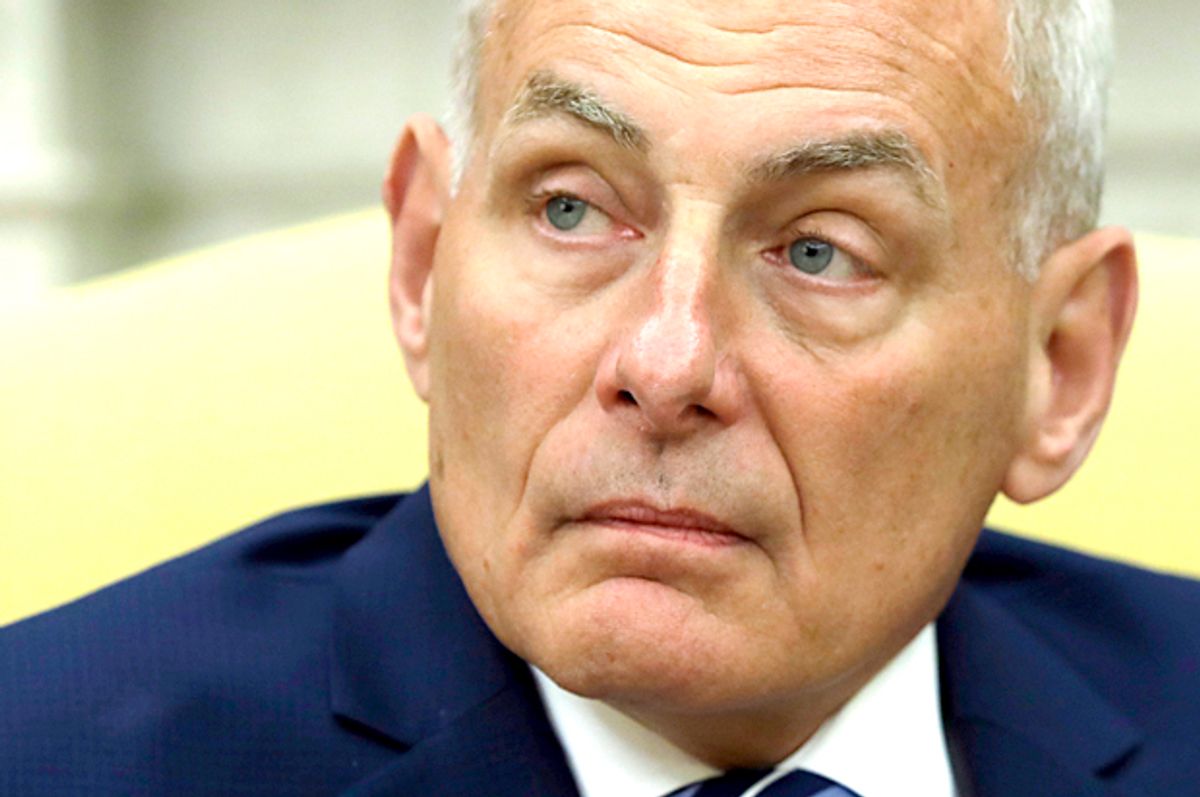 There's nothing quite like the breathless excitement of Beltway pundits at the prospect of a manly father figure striding into town to whip the political system into shape. CNN's Gloria Borger must have said "there's a new sheriff in town" at least 467 times in the space of one afternoon after the news that the colorful White House communications adviser of just 10 days, Anthony "The Mooch" Scaramucci, was out on his ear at the hands of the new White House chief of staff General John Kelly.

The thrill of having a swashbuckling military man bringing the hammer down on his very first day brought mainstream media commentators to the kind of collective swoon we haven't seen since President Trump hired Gens. H.R McMaster and James "Mad Dog" Mattis a few months back, and everyone declared that the grownups were back in charge.

Ben Domenech of the Federalist explained on "Face the Nation" on Sunday that Kelly's hire is a turning point. Normally this would lead to a prediction that Trump is finally going to "pivot," but by now everyone seems to realize that the president is incapable of "pivoting" to anything resembling presidential behavior. Never mind that; Domenech has a new pivot theory:

It's potentially a turning point in the early stages of this administration, a pivot away from perhaps loyalty to a GOP establishment which had been injected into this White House after a campaign in which they were very often at odds.

I've known the president for quite a while now, several years. And I know that he responds very, very well to flag officers. It's a group of people that he's very respectful of. I think that if he and General Kelly sat down ... I trust that the president is going to stand by whatever commitments he made to the general. This White House could use a Marine officer in charge. We all agree about this. I think we're going to see some good things.

It's true that Trump likes the idea of a granite-jawed man in uniform but in practice those relationships haven't worked as well as people predicted. Bloomberg's Eli Lake reported a couple of months ago that Trump was "disillusioned" with McMaster, his national security adviser, the last general everyone assumed would take command and give Trump the structure and focus he so clearly lacks.

That hasn't worked out too well. Trump doesn't like getting advice and reportedly complains that McMaster talks too much. He believes the general has "undermined his policy" by seeking to clarify the president's muddled message in the hopes of averting international incidents. Just last week the president showed his great respect for his secretary of defense and the Joint Chiefs of Staff by not bothering to consult with them before he tweeted out a ban on transgender military members, apparently on a whim.

On the campaign trail, Trump hailed World War II generals George Patton and Douglas MacArthur, both of whom were disciplined for insubordination, although Trump never gave the slightest indication he was aware of anything but their reputations as tough guys. Of course, there was one general in his administration with whom he seem to truly bond: Michael Flynn, the unstable short-term national security adviser who is now under investigation for being in the pocket of foreign governments. Trump still loves the guy and has remained loyal to him despite pretty much betraying every other member of his administration, most recently devoted Attorney General Jeff Sessions, doglike press secretary Sean Spicer, chief of staff Reince Priebus and now Scaramucci, his designated hit man.

Perhaps Gen. Kelly will have better luck. Trump certainly admired his ruthless approach to dealing with immigration during his stint as director of Homeland Security. It is ironic that a man who is being extolled as a rigid disciplinarian made his name at DHS as a leader who allowed rank-and-file ICE officers and Border Patrol agents to run wild and do whatever they deemed necessary regardless of the law. This is not the mark of a strict and controlled leadership style.

According to Dara Lind at Vox, Kelly has also recently adopted Trump's florid rhetorical style, ranting to an audience at George Washington University, “Make no mistake — we are a nation under attack. We are under attack from criminals who think their greed justifies raping young girls at knifepoint, dealing poison to our youth, or killing just for fun,” which apparently surprised people who have known him for a while and saw him as a more nuanced and sophisticated thinker. Trump undoubtedly appreciated such a validation of his worldview that the United States is at war with immigrants.

I wrote about Kelly's disturbing tenure at DHS a few weeks ago, and frankly I think he's better off working at the White House scheduling the president's time and refereeing the dysfunctional Trump family circus than overseeing that vast police agency. In a way, Trump's unfitness for office may serve to rein in Kelly as much as Kelly will rein in Trump.

Of course the Scaramucci firing dominated the news on Monday and overshadowed what should have been a very big story about Kelly that will shape his relationship with the president more than anything they may have in common. CNN reported that Kelly was extremely upset about the way Trump handled the firing of FBI Director James Comey back in May and even considered resigning over it. In fact, Kelly apparently called Comey while the latter was on his way back to Washington that very day, and Comey told him not to quit.

This story didn't get much play but you can bet Trump has heard about it. The president's insistence on blind loyalty is well known. He probably thought he had it in Kelly, whom he sees as a "tough" leader like himself. Now he knows that Kelly went behind his back and commiserated with his hated nemesis.

Trump predicted on Monday that Kelly "will go down, in terms of the position of chief of staff, as one of the greatest ever." But the minute things go sideways or Kelly tells him something he doesn't want to hear or Jared and Ivanka whisper complaints in his ear, Trump will turn on him. He knows that Kelly wanted to resign in protest against his behavior. The president will never be able to get that out of his mind and will never fully trust Kelly because of it. I'd guess that the general's not long for Trumpworld.