Republicans want to use the debt limit to pass tax cuts

On the verge of hitting the debt limit, conservatives threaten to only raise it if massive tax cuts are passed 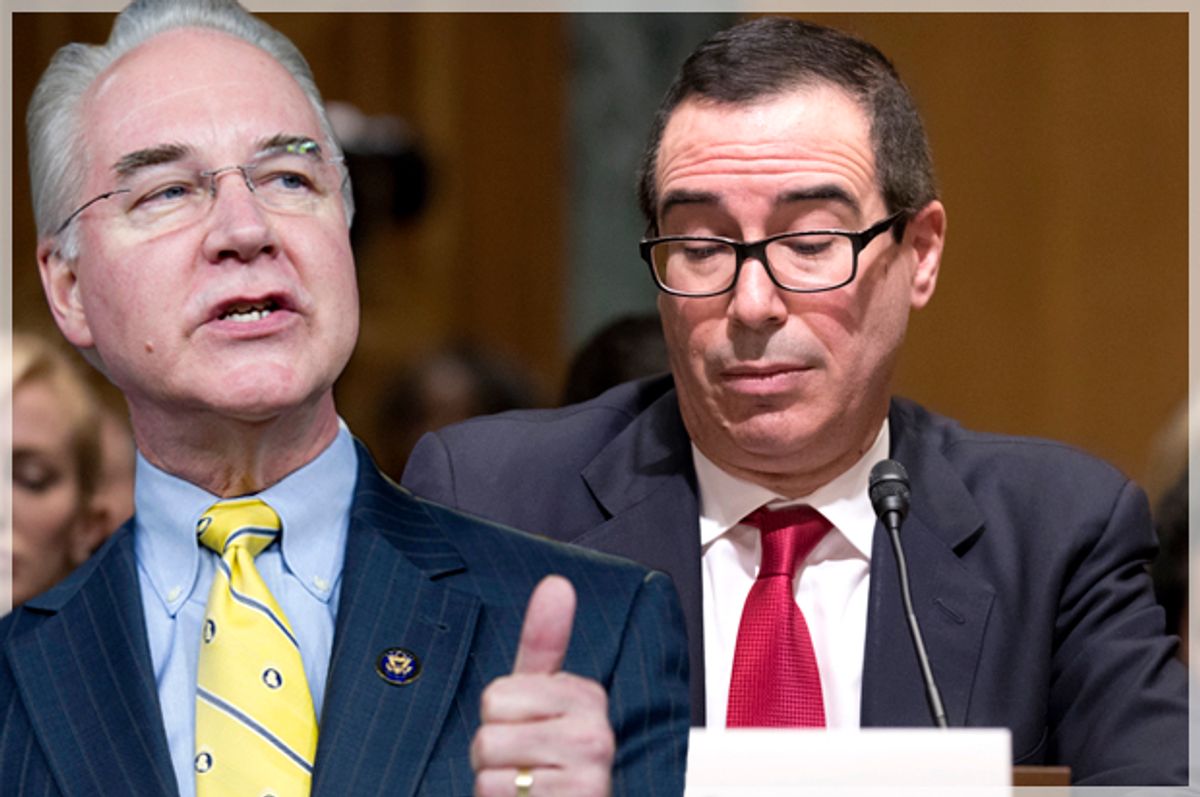 It appears as if the Trump administration is attempting to ram through major tax reforms at the same time as a vital bipartisan vote is required to avoid a financial catastrophe.

Treasury Secretary Steven Mnuchin has called for a "clean" debt ceiling increase, but after a meeting with the top Senate Democrat and Republican on Tuesday, talks appear to be at an impasse, threatening the U.S. with a major financial crisis in the coming months, according to multiple news reports.

The Treasury Department has said that "it would no longer be able to pay all of the government’s bills" unless Congress raises the debt limit. "A default would likely set off a major disruption to the world financial system, with a stock market crash and surging interest rates that could send the economy into a recession."

The Senate and the House only have 12 days of working together before September 29, according to The Washington Post. Despite the impending deadline, the Republican-led House is currently in recess until after Labor Day.

It will be difficult for both parties to reach an agreement, "and neither GOP nor Democratic leaders have signed off yet on the Trump administration's plan to raise the debt limit without attaching other policy sweeteners," according to Politico. Politico elaborated on the hurried political negotiations:

Democrats, however, are not sure that Mnuchin and the White House can line up a significant number of GOP votes for any such debt boost.

Conservative Republicans frequently tried to use the debt ceiling increase during the Obama era to push for other spending cuts, though they faced stiff opposition from Democrats and former President Barack Obama. The 2011 debt limit showdown led to a downgrade in the U.S. credit rating.

“Democrats are going to have to make a political calculation whether they want to help this president and Secretary Mnuchin grow the economy,”  Tony Sayegh, former Fox News contributor turned assistant secretary for Public Affairs at the U.S.Treasury, told Fox Business Network on Tuesday. “You can have legislation crafted by the committees of jurisdiction coming kind of in early September, moving through the House and the Senate through October bringing it to November, and at that time you’re also going to have the opportunity in Congress to address the debt ceiling, to address the budget.”

As recently as June, House Minority Leader Nancy Pelosi, D-Calif., expressed her support for a "clean" debt limit increase. However, Democrats are concerned with voting on a debt increase while President Donald Trump works with Republicans to pass tax reform measures out of fear they "will be trying to push through a tax cut package that could heavily favor wealthier Americans and increase the deficit," Politico reported.

Sen. Orrin Hatch, R-Utah, bluntly rejected the Democrats' idea of a red-line on taxes. "Tell them to grow up," he said on Tuesday, according to Bloomberg News reporter Sahil Kapur. "I want to be able to do what I think is going to get us out of the problems we're in," Hatch added. Senate Majority Leader Mitch McConnell weighed in on his meeting with Senate Minority Leader Chuck Schumer, D-N.Y., and Mnuchin on Tuesday, saying the U.S. will "never, ever default."

Sen. Ron Wyden D-Ore., has said that tax reform "should not lower taxes for the wealthiest few or add to the debt." Corporate chief executives cheered on Trump's tax plan when his administration released a one-page memo in April.

For their part, House conservatives, who have traditionally demanded spending cuts and budget caps in exchange for an increase in the debt limit are hardly fighting the Trump administration's push for a "clean" raising of the debt limit as they did during the Obama administration. Suddenly, with massive tax cuts on the table, conservatives are all too happy to increase spending.

“I think they end up passing it with some reauthorization to get Democrats on board and 40 or 50 Republicans and get it done,” House Freedom Caucus Chairman Mark Meadows, R-N.C., told reporters last month.