Government agencies protect big agriculture at the expense of our health 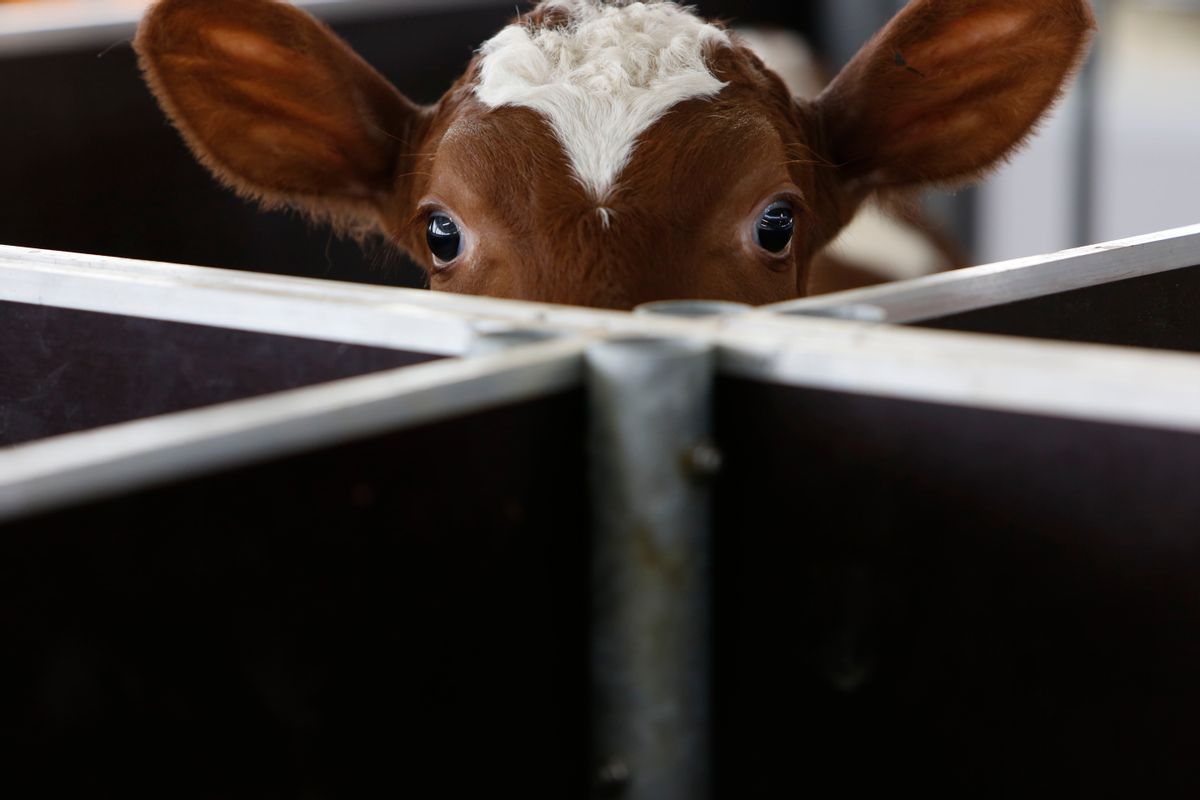 In this photo taken on Tuesday, April 15, 2014, a Norwegian Red calf waits for food inside a farm in the village of Kozarac, near Bosnian town of Perijedor, 250 kms northwest of Sarajevo. Bosnian farmer Jusuf Arifagic invested eight million euro into the luxury farm that started four months ago with the import of 115 Norwegian Red Cows - a type of tough and hornless animal bred in Norway over the past 75 years to produce more and better milk than the usual cow known in the Balkans. He plans to expand into the biggest facility keeping this type of animal in Europe with 5,000 cows. In a country where half of the population is living in poverty, his animals sleep on mattresses in a barn with a computerized air condition and lighting system. They are bathed regularly, get a massage whenever they feel like it and receive the occasional pedicure.(AP Photo/Amel Emric) (AP Photo/Amel Emric)
--

Don't worry, eat your hamburger. That's what the CDC is saying as another "mad cow" was found in Alabama in July. The cow suffered from an "atypical" version of Mad Cow (BSE), says the CDC, which occurs spontaneously and cannot harm humans. Sounds good until you read that the atypical assertion is merely a CDC "theory" and the agency admits "transmission through feed or the environment cannot be ruled out."

There is a reason government officials are quick to defend the safety of the U.S. beef supply. Within hours of the first mad cow discovered in the U.S. in 2003, China, Mexico, Russia, Brazil, South Africa, Hong Kong, Japan, Singapore, Taiwan, Malaysia, South Korea and 90 other countries banned U.S. beef. Ninety-eight percent of the $3 billion overseas beef market vanished. It has taken 14 years for the U.S. to re-establish its beef exports and other beef-exporting countries have had similar woes. If an atypical version of BSE that threatened no one didn't exist, governments might want to invent one. In fact, the research behind the atypical theory is primarily floated by government ag departments.

In addition to losing exports, before atypical BSE was described, beef producers were forced to quarantine their ranches, search for tainted food sources and detain herdmates and offspring in a BSE outbreak. They lost huge amounts of money. The debut of atypical BSE means they can just say "these things happen," and keep doing business.

Mainstream media sources are cooperatively repeating the government statement that, "the Alabama cow was not slaughtered, never entered the food supply and presents no risk to human health in the United States or anywhere else." But food reporters who have covered BSE since 2003 remember that the same thing was said about the first U.S. BSE cow until both the San Francisco Chronicle and the LA Times reported otherwise.

“In an interview, Alameda County health officer Dr. Anthony Iton recalled that in early January 2004 almost a month after the initial discovery [of a BSE cow], state health officials informed him that five restaurants in the Oakland area had received soup bones from the lot of tainted beef,” reported the Times. “It immediately dispatched inspectors to the restaurants. But it was too late; soup made from the bones had been eaten. He was particularly disturbed to learn that none of the restaurant owners had received written notice of the recall and that federal inspectors did not visit them until 10 days after the recall.”

And there was more government BSE bumbling. A cow, born and bred in Texas, found less than a year after the first one (born in Canada) was suspected of having BSE, but ruled "negative" by government testers for seven months. Phyllis Fong, the inspector general at the time, ordered the more precise “Western blot” over the head of then Ag Secretary Mike Johanns and the cow was diagnosed with BSE.

After the Texas BSE cow, a BSE cow born and bred in Alabama was found. Extensive government investigations were conducted on both to find the source of the deadly disease and there was no mention of the current atypical BSE. Disturbingly, the government protected the identifies of the ranches that produced the BSE cows from food consumers, placing the interests of meat producers above the endangered public.

Government prion research not to be trusted

BSE is transmitted by prions, invisible infectious particles that are not viruses or bacteria, but proteins. Though prions are not technically "alive" because they lack a nucleus, they are almost impossible to "kill" because they are not inactivated by cooking, heat, ammonia, bleach, hydrogen peroxide, benzene, alcohol, phenol, lye, formaldehyde or radiation. Yet government research into prion diseases—which include chronic wasting disease found in deer and elk — is extremely inept.

In 2006, BSE research had to be delayed at the National Animal Disease Laboratory in Ames, Iowa because lab workers there accused the facility of failing to properly treat infectious wastes before they were sent to the city's treatment plant which empties into the Skunk River. The lab, in charge of confirming BSE cases, was also charged with keeping rather than incinerating dead animals for months in containers.

Nor do government protocols for human victims inspire confidence. When neurologist Ron Bailey's patient Patrick Hicks apparently came down with the human form of Mad Cow disease caused by eating infected meat, variant Creutzfeldt-Jakob Disease (vCJD), he was told by the National Prion Disease Pathology Surveillance Center the tissue samples he had sent for confirmation could not be tested because they were obtained from 1-800-Autopsy and not kept properly. Creutzfeldt-Jakob Disease can exist in forms not caused from eating meat including one that "just happens" also called "atypical."

When a possible vCJD case occurred in Amarillo in 2008, threatening beef markets, the Amarillo office of Texas AgriLife Extension reassured the public that the woman's case was not caused from eating beef before tests on the victim had been conducted and a conclusion drawn. Since then, other prematurely dismissed cases have occurred as have CJD clusters, which seldom can be random and usually suggest a food source.

The same "money before people" priorities of the CDC and USDA can be seen with state Departments of Natural Resources' (DNRs) as they deal with CWD, the deer version of BSE. Just as BSE fears pummel beef markets, CWD fears deplete the hunter revenues DNRs are based on.

In 2004, Wisconsin endured a CWD epidemic with headless deer waiting in trailers to be tested before people would eat them. Some food pantries refused the potentially lethal deer meat; others gave patrons fliers with warnings.

There is no evidence that CWD in deer can infect humans, say DNR officials — especially if hunters avoid the brain, eyeballs, spinal cord, spleen or lymph nodes. But sadly, there is evidence of a deer-to-human infection path. Medical studies have identified pathways of transmission including a 2002 CDC report titled "Fatal Degenerative Neurologic Illnesses in Men Who Participated in Wild Game Feasts, Wisconsin, 2002."

This summer, the Journal Sentinel reports that "Amid renewed concern about whether chronic wasting disease can jump from deer to people, a fatal human brain condition in the same family is showing up more often in Wisconsin and nationally." There have been 13 cases of vCJD in the last four years, says the Journal, "a 117% increase" since 2002.

As anyone might expect, state and federal official have immediately spun the human vCJD cases.

“The department believes the modest increase in the number of confirmed cases in the state is a reflection of our increased efforts to detect and confirm cases,” Jennifer Miller, a spokesperson for the Wisconsin Department of Health Services, told the Journal. (Though she did admit that 52 percent of CJD cases in Wisconsin in the last five years were found in people with a history of eating venison.)

The CDC, for its part, attributes the growing brain illnesses, possibly linked to CWD in deer, "to an aging population, more awareness among neurologists and the use of the National Prion Disease Pathology Surveillance Center at Case Western Reserve University in Cleveland, Ohio." Maybe they will soon call it "atypical."