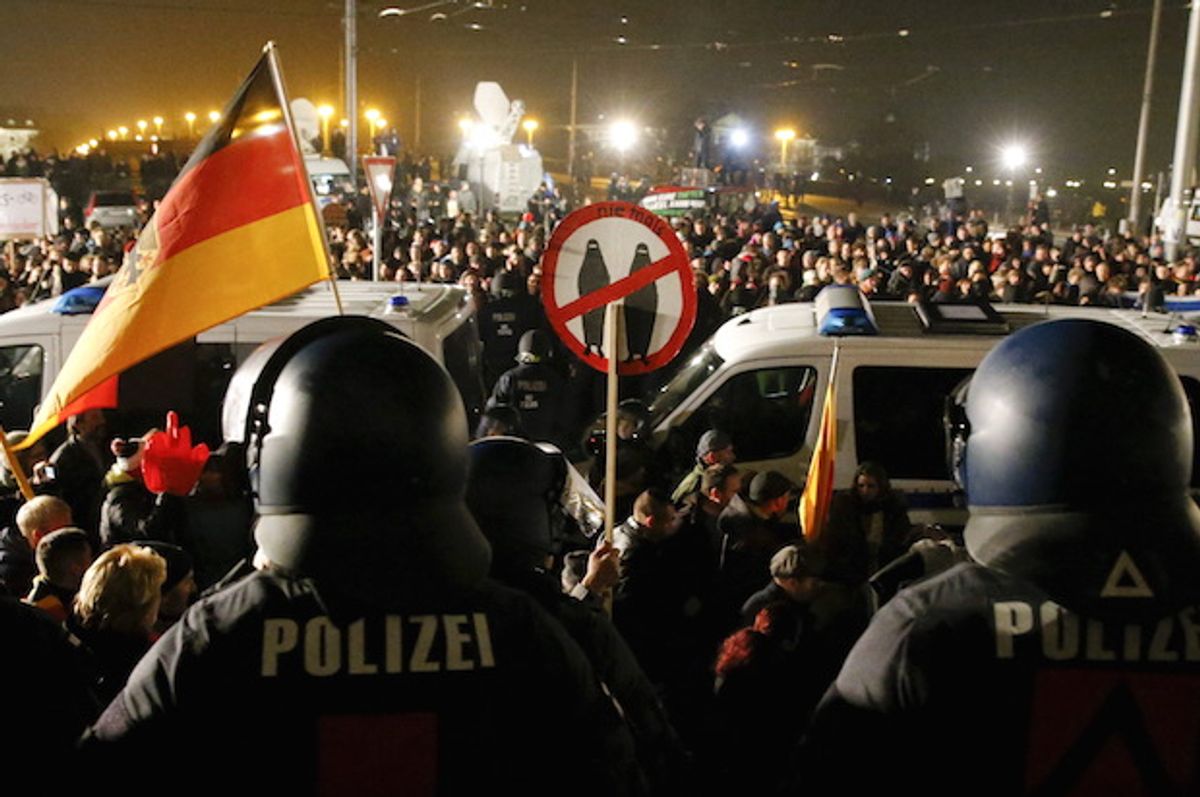 Right-wing protesters at an anti-immigration demonstration organized by the racist movement Patriotic Europeans Against the Islamisation of the West, or Pegida, in Dresden, Germany on October 19, 2015 (Reuters/Fabrizio Bensch)
--

Defend Europe, an anti-immigrant group that attempts to disrupt humanitarian search and rescue missions in the Mediterranean Sea, recently chartered a boat that was stopped in a Cyprus port, where several members were arrested for forging documents and engaging in potential human trafficking. Since then, pro-Trump media trolls associated with the campaign have been conspicuously silent.

The members were stopped in and deported from a sea port in the self-declared Turkish state of Northern Cyprus Thursday after spending two days in detention for document forgery and potential human trafficking of 20 Sri Lankan nationals who were aboard the C-Star, the campaign’s ship. Turkish Cypriot authorities deported nine crew members, including the ship’s captain and a German “second captain” believed to be neo-Nazi Alexander Schleyer. The authorities also transferred the director of the company that owns the ship, Sven Tomas Egerstrom, to Greek-controlled Cyprus for further questioning.

Refugee Rights Association advocate Faika Pasha told The Associated Press that some of the Sri Lankans on board reported having paid a trafficker to be taken to Italy and confirmed that five Sri Lankans remained in Cyprus to claim asylum. (Defend Europe claims the Sri Lankans were actually bribed by nongovernmental organizations (NGOs) to claim they were seeking asylum.)

Defend Europe is a campaign by anti-immigrant, “alt-right” activists to disrupt humanitarian search and rescue missions of migrants in the Mediterranean Sea. The effort is the brainchild of Generation Identity, a pan-European “Identitarian” movement known for its members’ high-profile political stunts.

Since the arrest and deportation of the C-Star’s crew members, Defend Europe has been doing some damage control on Twitter, claiming the ship was “released” and that “lies and #fakenews from NGOs have been exposed once again.” The next day, the account pinned an image of the group’s alleged goals on its feed, one of which was to “save migrants in danger of drowning and making sure they get to the nearest non-European safe port.”

However, Generation Identity’s Austrian co-founder, Martin Sellner, has repeatedly claimed that Defend Europe’s goal is to take migrants from North Africa back to Libya — a violation of the non-refoulement principle of the United Nations 1951 Refugee Convention against sending refugees back to their county if they would be in harm’s way. In June, Sellner said, “We want to face those human trafficking ships on the sea. We want to disrupt their doings. And, of course, if you meet an account of people in distress on the sea, save them but bring them back to where they started from.” He reiterated his stance a month later, saying that Defend Europe will “do everything in our power to make sure that they go back to Africa, where they belong.”

Since the detainment of Defend Europe members and their subsequent expulsion from Turkish-controlled northern Cyprus, the movement’s right-wing media allies and pro-Trump trolls have been noticeably mum. As of this piece’s publication, Brittany Pettibone, who has actively been reporting in support of Defend Europe from Catania, Sicily, had tweeted only twice on the subject since the incident, both times promoting Defend Europe’s conspiratorial narrative that NGOs are propagating fake news and “hiding something” about their alleged collusion with international human trafficking rings.

Even more notably, Lauren Southern, a Canadian media troll who made a name for herself denying the existence of rape culture and demonizing minorities and who has been actively involved in the Defend Europe campaign, has not tweeted a single time about the recent incident (though she has retweeted in support of Defend Europe). Online payment service Patreon recently suspended Southern’s account for violating the crowdfunding platform's terms by soliciting donations for the Defend Europe campaign; Southern has since resorted to using PayPal. PayPal previously froze Defend Europe's account, saying in a statement, “Our policy is to prevent our services being used by companies whose activities promote hatred, violence or racial intolerance."

Peter Sweden, a previously vocal Holocaust denier who reversed himself in mid-July, has been similarly silent on the recent controversy surrounding Defend Europe. Sweden has bragged about disrupting search and rescue missions in the Mediterranean and has also been interviewed by conspiracy theorist Alex Jones, taking the opportunity to fearmonger about crime in Sweden.

Katie Hopkins, a columnist for British news site MailOnline who regularly appears on Fox News to voice her Islamophobic, anti-immigrant views, has also been silent on Twitter about the C-Star’s deportation from Cyprus. Hopkins recently tweeted a photo of herself with Sweden, which she later deleted. Her involvement with the Defend Europe campaign has been documented by the anti-extremism research and education group HOPE Not Hate.

Tara McCarthy, who hosts a YouTube show alongside Pettibone and who has said, in a since-deleted tweet, that she hopes “zero” migrants crossing the sea to Europe “make it alive,” has also not commented on the C-Star’s seizure.

According to HOPE Not Hate, pro-Trump propaganda outlet Breitbart, white nationalist site AltRight.com, racial nationalist organization American Renaissance, Nazi website The Daily Stormer, and former Ku Klux Klan leader David Duke have also voiced support for Defend Europe’s mission. As of noon on July 28, none of these outlets or individuals had responded to the latest developments.

The silence of these pro-Trump trolls exposes their opportunism and cowardice. They engage in high-profilestunts to profit and promote themselves and then back away when the going gets tough, as prominent troll Mike Cernovich did when he attempted to deny involvement in the “Pizzagate” conspiracy. The pro-Trump trolls subscribed to the Defend Europe campaign for donations and foreign Twitter followers, but now they’re stuck in a sordid relationship with a movement that is endangering innocent lives and potentially violating international law. It remains to be seen how they will meme their way out of this one.