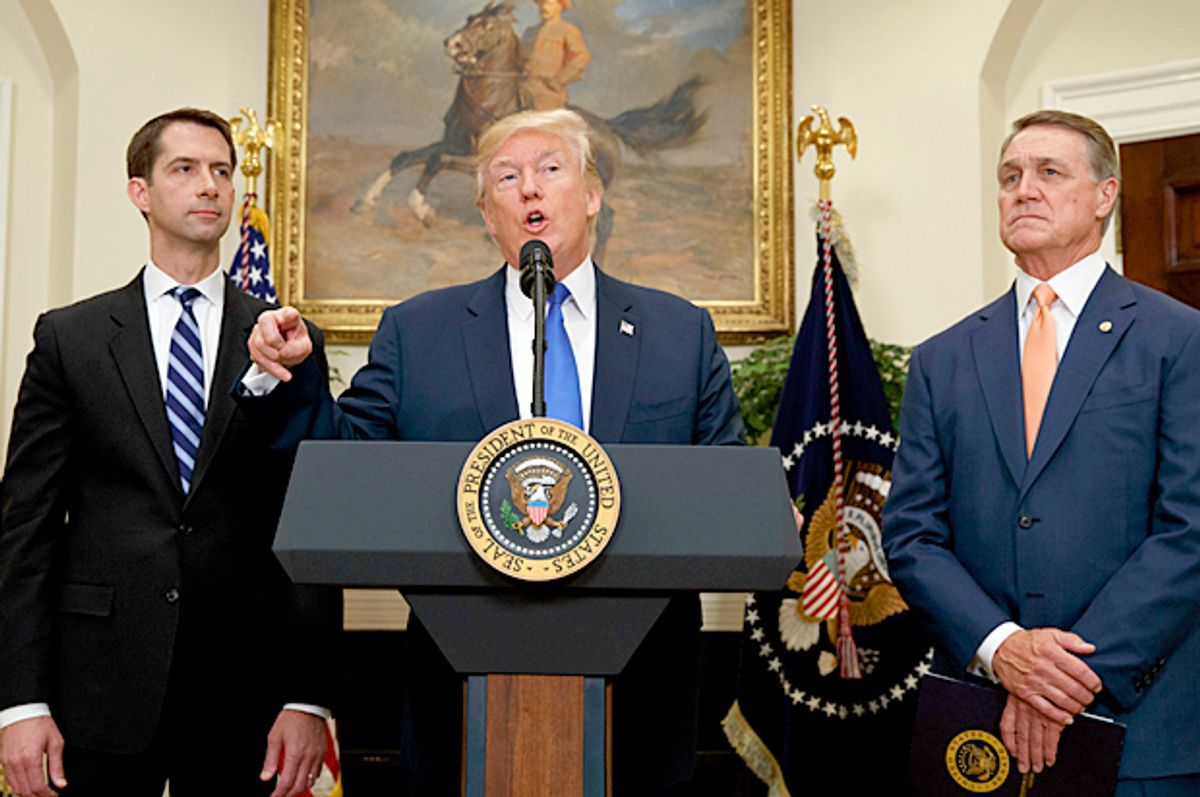 At the White House on Wednesday President Donald Trump unveiled a major overhaul of the U.S. immigration system. Trump endorsed GOP legislation that aims to slash legal immigration levels by more than half and introduce a "merit-based" system that prioritizes high-skilled immigrants for entry.

Standing next to Sens. Tom Cotton, R-Ark., and David Perdue, R-Ga., the president said the RAISE Act (Reforming American Immigration for Strong Employment Act) would be the "biggest change in 50 years" to the U.S immigration system.

"The RAISE Act will reduce poverty, increase wages and save taxpayers billions and billions of dollars," Trump said. The current immigration system, according to Trump, "has not been fair to our people, to our citizens, to our workers."

"This legislation demonstrates our passion for struggling American families," he added.

The two Republican senators "have been working closely" with White House adviser Stephen Miller, who is "known for his hawkish stance on immigration," according to Politico. Miller is also one of the key architects of the president's travel ban of citizens from six Muslim-majority countries.

The merit-based system the legislation proposes would "increase the number of green cards — which allow for permanent residency in the U.S. — that are granted on the basis of merit to foreigners in a series of categories including outstanding professors and researchers, those holding advanced degrees, and those with extraordinary ability in a particular field," according to Politico.

But the bill is rooted in misleading depictions of immigration, as economists have said slowing the flow of legal immigrants into the country would be a "grave mistake." In a recent Washington Post survey of 18 economists, almost all (89 percent) disagreed with Trump's proposal to slash legal immigration levels by more than half. "Restricting immigration will only condemn us to chronically low rates of economic growth,” Bernard Baumohl, chief global economist at The Economic Outlook Group, told the Post. "It also increases the risk of the recession."

While many economists and business leaders have supported a merit-based approach to immigration, similar to the processes in Canada and Australia, the plan to "slash the number of green cards from 1 million a year to 500,000 over the next decade" poses a major risk to the economy, economists said. The Post elaborated:

In April, over 1,400 economists from across the political spectrum sent a letter to Trump urging him not to cut immigration. The letter said there was “near universal agreement” on the “the broad economic benefit that immigrants to this country bring.” Thomas Simons, senior economist at Jefferies investment firm, said a 50 percent reduction would be “absolutely harmful to an economy with a population undergoing the demographic transformation.”

The bottom line is that the United States needs more workers. Growth happens when one of two things occurs: The economy gets more workers or the existing workers become more productive. At the moment, both of those factors are red flags. Productivity growth is sluggish, and, as Trump has pointed out many times, the percentage of American adults who actually work — the labor-force participation rate — is hovering at the lowest levels since the 1970s.

"We need to modernize the immigration system, but cutting immigration in half is bad for the economy and bad policy," said Jeremy Robbins, executive director of New American Economy, according to the Post.

The RAISE Act will face plenty of opposition from congressional Democrats, and even some Republicans, as well as immigrants rights groups and business leaders. "[T]he bill's prospects are dim in the Senate, where Republicans hold a narrow majority and would have difficulty getting 60 votes to prevent a filibuster," the Post reported.

Sen. Lindsey Graham, R-S.C., has already expressed concern over the bill's drastic cuts to immigration, arguing the cuts would be "devastating" to his state's economy. "I've always supported merit-based immigration. I think we should always want to attract the best and brightest to the United States," Graham tweeted. "Unfortunately other part of proposal reduces legal immigration by half including many immigrants who work legally in Ag, tourism, & service."

Todd Schulte, the president of Mark Zuckerberg's immigration reform advocacy group FWD.us, has said that the immigration slashes "would severely harm the economy and actually depress wages for Americans," which is the exact opposite of the rhetoric touted by the Trump administration about economic growth.

"President Trump has always been correct when he repeatedly said he does NOT want to cut legal immigration. Not only do immigrants help grow the economy overall, but immigrants drive up wages for the overwhelming majority of Americans, and significantly so in areas and industries with more immigrants, where wage growth has outpaced the country overall," Schulte said, according to a press release.