Trump signed on to play the president in "Sharknado 3," turned it down for real thing

Maybe if he had actually played the role, we wouldn't be in this mess 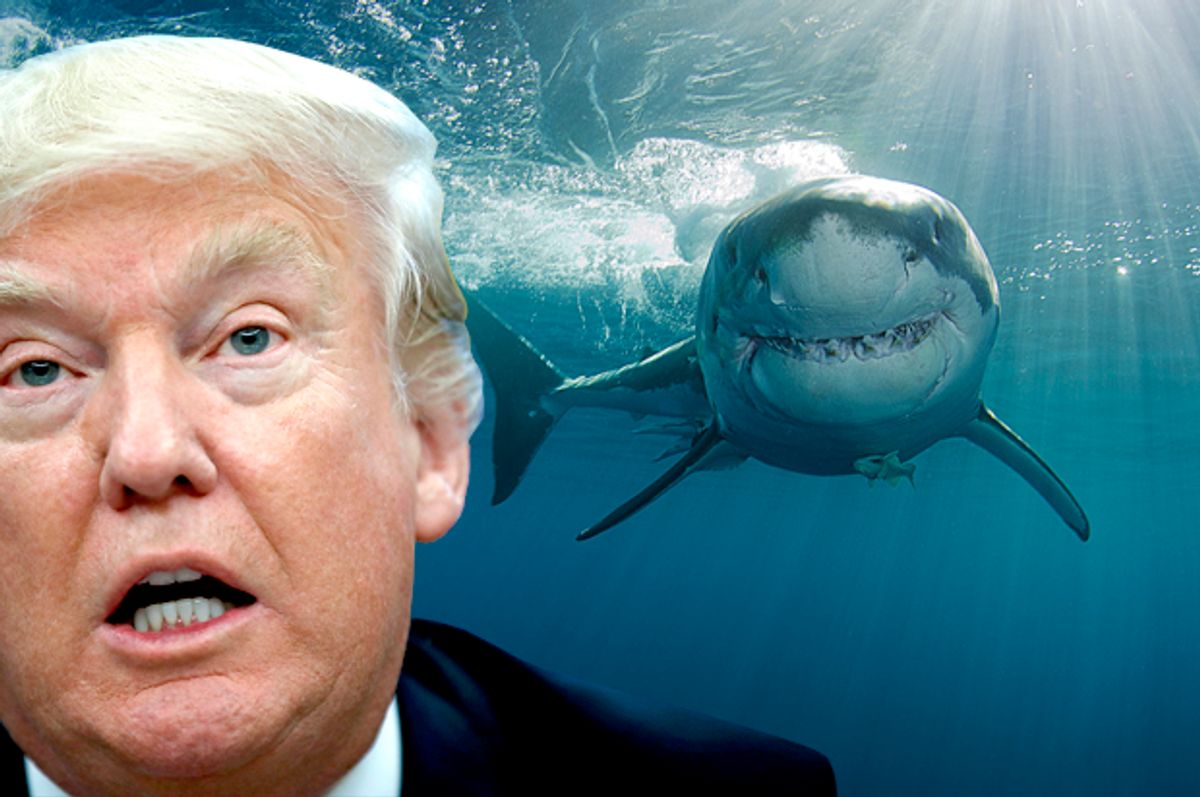 For what became a scintillating writeup in the The Hollywood Reporter, writer Seth Abramovitch sat down with the producers of the campy, courageously nonsensical "Sharknado" franchise to find out how they've been able to draw celebrities from both the A and D levels into their endless maelstrom of CGI killer sea life and terrible, terrible puns.

On top of solid stories and horrid revelations — the pay gap is a very real thing in the "Sharknado" universe — the producers share that, yes, current president and sundowning nativist Donald J. Trump was indeed signed on to play the commander in chief during the production of the third film in the series.

According to producer David Latt, the grimacing reality star and sometime real-estate developer was wooed for the role of the president in 2015's "Sharknado 3: Oh Hell No!" when first choice Sarah Palin dropped out. After "Sharknado" star and "Celebrity Apprentice" contest Ian Ziering reached out to Trump about the opportunity, "The Donald said yes," Latt told Abramovitch. "He was thrilled to be asked."

Indeed, casting director Gerald Webb said "We got pretty far," noting that Trump's attorney and current player in the Russia investigation Michael D. Cohen drew up a contract. "It was serious talks."

So why is the rattled and rattling world leader perched behind the Resolute Desk instead of being just another name in the list of political "Sharknado" guest stars that includes Ann Coulter and Anthony Wiener?

It seems that as production moved closer to filming, the Trump team went silent, only to tell the producers that their man had shifted priorities. "Donald's thinking about making a legitimate run for the presidency, so we'll get back to you," Latt recalls Cohen telling him. "This might not be the best time." The producers went with the obvious next option, Mark Cuban.

This, of course, prompted a predicable reaction from Cohen and Trump. "Then we immediately heard from Trump's lawyer," Latt told Abramovitch. "He basically said, 'How dare you? Donald wanted to do this. We're going to sue you! We're going to shut the entire show down!'" You know, these guys are admirable in their consistency if nothing else.

And thus do we have fake-president Cuban and real-president Trump, a situation many would now happily reverse. And really, should Trump have opted for commanding our nation on film against a tide of murderous sharks instead of commanding it in real life against a tide of true, complex problems; wouldn't even he have been better off? He certainly doesn't seem to enjoy governing. No, a shot at pomp, visibility and victory over a doll-eyed, ravenous enemy was all the sad, unloved boy from Queens ever really wanted. On "Sharknado 3: Oh Hell Ya!" he would have gotten it.