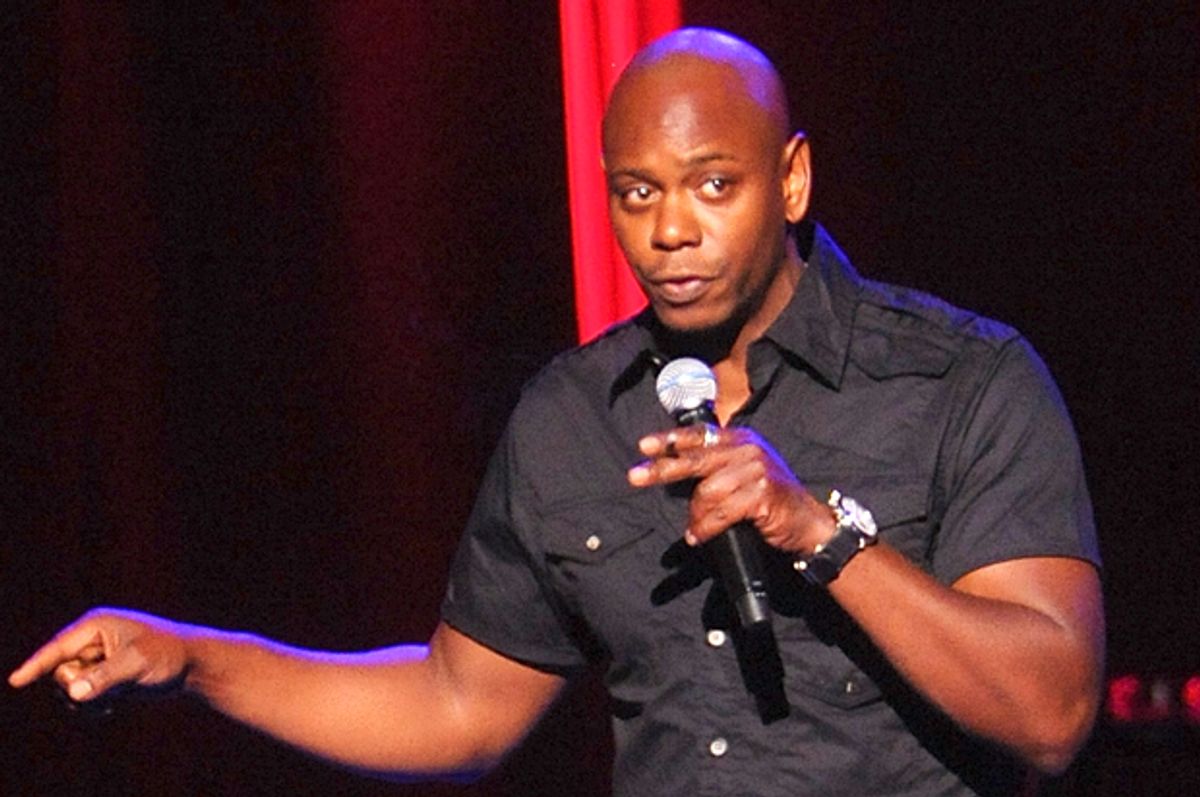 After Dave Chappelle walked away from his hit television show — and $50 million — on Comedy Central in 2005, the comedian stayed out of the public eye and shied away from controversy. Since his long-awaited return in 2016, Chappelle has made headlines, and unfortunately for him, not in always good ways. Reviews for the first installment of his 16-show residency at Radio City Music Hall were no different, as his performance came riddled with transphobia.

On Tuesday, Chappelle kicked off his residency with numerous failed attempts at discussing Trump and transgender issues. He started the night off with 20 minutes of transphobic jokes in which he claimed transgender troops were the "secret weapons" of the U.S. military because ISIS would be too repulsed to fight them.

“If I was in ISIS in the trenches fighting against the United States and all of the sudden I see a man with a beard and big D-cups titties just rushing my foxhole and shit, I’d be horrified,” Chappelle said, according to Vulture.

Chappelle even slammed Caitlyn Jenner's interest in being part of an issue of "Sports Illustrated" magazine. He claimed that would be "cramming man-pussy" into the magazine.

After admitting he knows very little about transgender people — which he had already made very clear through his rhetoric — Chappelle acknowledged that ignorance does not bar a trans person "from being a human being that deserves a life with dignity and happiness and respect.”

However, Chappelle followed his moment of "sincerity" with one of foolishness as he disregarded the inherent dangers that come with being a transgender woman of color.

"[T]he only reason all of us are talking about transgenders is because white men want to do it. If it was just blacks and Mexican like, ‘Hey, y’all, we feel like girls inside.' They’d be like, ‘Shut up, n****r, no one asked how you felt," Chappelle said during the show. This statement, of course, runs counter to the fact that people of trans identity make up the same percentage of Latinx and black populations at they do of white populations.

This isn't the first time the comedian made anti-LGBTQ comments. In May, two of his comedy specials were released on Netflix as part of a three-special $60 million deal with the streaming service. In the specials, Chappelle used a high-pitched voice to imitate gay men and claimed they "always have some kind of political argument." And, in an unsuccessful attempt at making a joke about a gay man who was petitioning to remove the words "husband" and "wife" from marriage licenses, he exhibited his inability to discuss LGBTQ issues in a helpful manner.

“N**** please, save me the semantics,” Chappelle says. “Take your chips out of the casino, you’re about to crap out. Go outside, talk it over amongst yourselves, and whichever one of you is gayer, that’s the wife.”

His egregious comments about the identities of trans people reflect a broader issue the country now faces, especially as Trump's transgender military ban reduces them to secondary citizens. And as the lives of trans people are threatened every day, remarks such as these shouldn't be taken so lightly, even if they were "just a joke."

Chappelle was — and remains — a singularly important and singularly funny black entertainer and a sometimes laudably uncompromising one at that. He's done a lot of great things. However, Chappelle's value as an unapologetically black performer in a white society does not outweigh his failures as a positive, accepting person. Indeed, as a sometime role model and regular voice for parts of his community, he should be held to a higher standard and at the very least try to be more understanding and empathic. Until he's capable of doing that, the least he could do is keep LGBTQ jokes out of his performances.