Warning of “foreign infiltration,” Republicans are now looking to deport members of the U.S. military 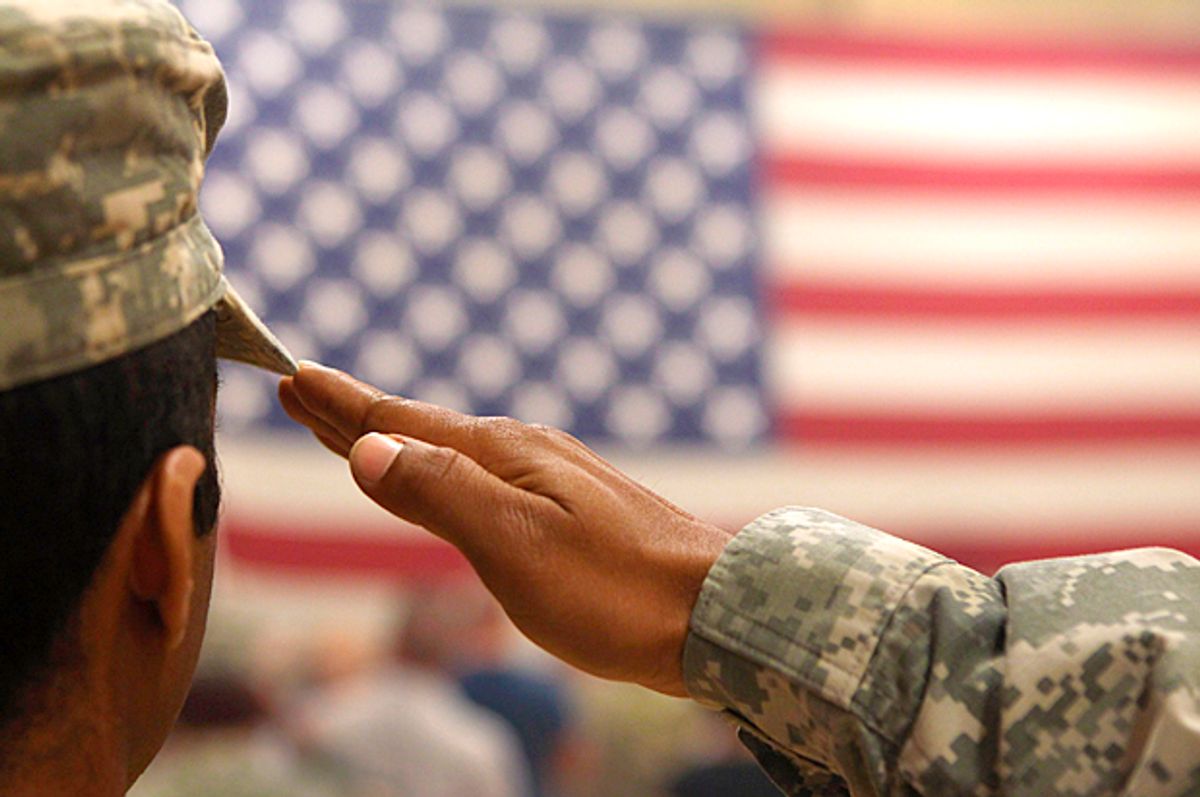 The White House is currently celebrating “American Dream Week,” part of a gimmicky branding scheme meant to highlight President Donald Trump’s achievements. So far during this celebration Trump has unveiled his new immigration plan, saying he wants immigrants "who speak English," and now the Civil Rights Division of his Department of Justice will reportedly investigate affirmative action programs for discriminating against white people. Last week, Trump tweeted his ban on transgender service members in the military during what the White House called "American Heroes Week." See a pattern here?

Continuing to scapegoat vulnerable communities for political promotion, Trump’s administration appears poised to pick on a new target: foreign-born people who serve in the U.S. military. A group of soldiers in the U.S. Army Reserve have filed a lawsuit this week, one of several by recruits in recent months, against the Pentagon and the Department of Homeland Security. The suit cites an administration proposal to cancel enlistment contracts for 1,000 immigrant military recruits. About 2,400 part-time troops who have yet to attend basic training have also been targeted.

At issue is the Pentagon’s initiative to harness necessary medical and language skills in exchange for fast-track citizenship for foreign-born service members. A May 2017 memo from Pentagon officials addressed to Secretary of Defense Jim Mattis, which NPR obtained, states that officials plan to dismantle the program due to an “elevated risk to the Department” and the cost of additional background checks for the recruits. Fox News’ James Rosen reported this week that a recently completed Inspector General report, along with three separate congressional committees, has caused alarm over security risks within the program.

But this program, officially known as Military Accessions Vital to the National Interest (MAVNI), actually began as a Republican idea, developed during the final months of George W. Bush’s presidency, Since 2009, more than 10,400 troops have served in uniform under the terms of MAVNI, according to retired Lt. Col. Margaret Stock, the program’s founder.

Right-wing Republicans have targeted the military’s pathway to citizenship in recent years. In a congressional hearing on June 28, Rep. Steve Russell, R-Okla., told colleagues that “the program has been replete with problems, to include foreign infiltration – so much so that the Department of Defense is seeking to suspend the program due to those concerns.” A retired Army officer who sits on the House Armed Services subcommittee on military personnel, Russell told Fox News’ Rosen this week that “The lack of discipline in implementation of this program has created problems elsewhere.”

A U.S. soldier in Hawaii was recently arrested for attempting to provide support to ISIS, and another soldier was discharged after he fought with Russian-backed militants in Ukraine. Neither was foreign-born. But Republicans and the Trump administration appears determined to fight against an imaginary invasion of ISIS through a complicated, years-long plot to gain citizenship through the U.S. military. As McClatchy recently reported, “the Pentagon, in its court filing in this case, is clear about the implications.”

Although the soldiers named in this suit received their certifications, they “could be considered signed in error and may be decertified,” Stephanie Miller, Director of Military Accession Policy at the Pentagon, said in a July 28 filing, citing the program’s guidance.

She also indicated the military wouldn’t protect recruits whose legal status is running out because their applications have come to a standstill: “For the MAVNIs who are no longer in a valid immigration status, and whether they will be subject to deportation … DoD defers to the authority of the Department of Homeland Security and U.S. Citizenship and Immigration Services,” she said.

Republicans and the Trump administration have seized on the emotional fears of the president’s base to inject the military bureaucracy into the middle of a hyper-politicized argument over immigration policies.

Advocates of the program, however, argue that none of MANVI’s highly vetted immigrant recruits has ever been implicated in a serious security breach.

“These recruits deserve the chance to defend our freedom instead of being put at risk for deportation. Anything else is a breach of contract,” Sen. Tammy Duckworth, D-Ill., an Army veteran who was severely wounded as a helicopter pilot in Iraq, told the Washington Post in June. “As a country, we made a commitment to thousands of brave men and women who are willing to lay down their lives in service to our great nation. I’m sad to see that with President Trump as commander in chief, even our military can’t be trusted to keep its promises.”