If the celebrity hasn't harmed anyone, why would it be okay to expose secrets they'd prefer to keep to themselves? 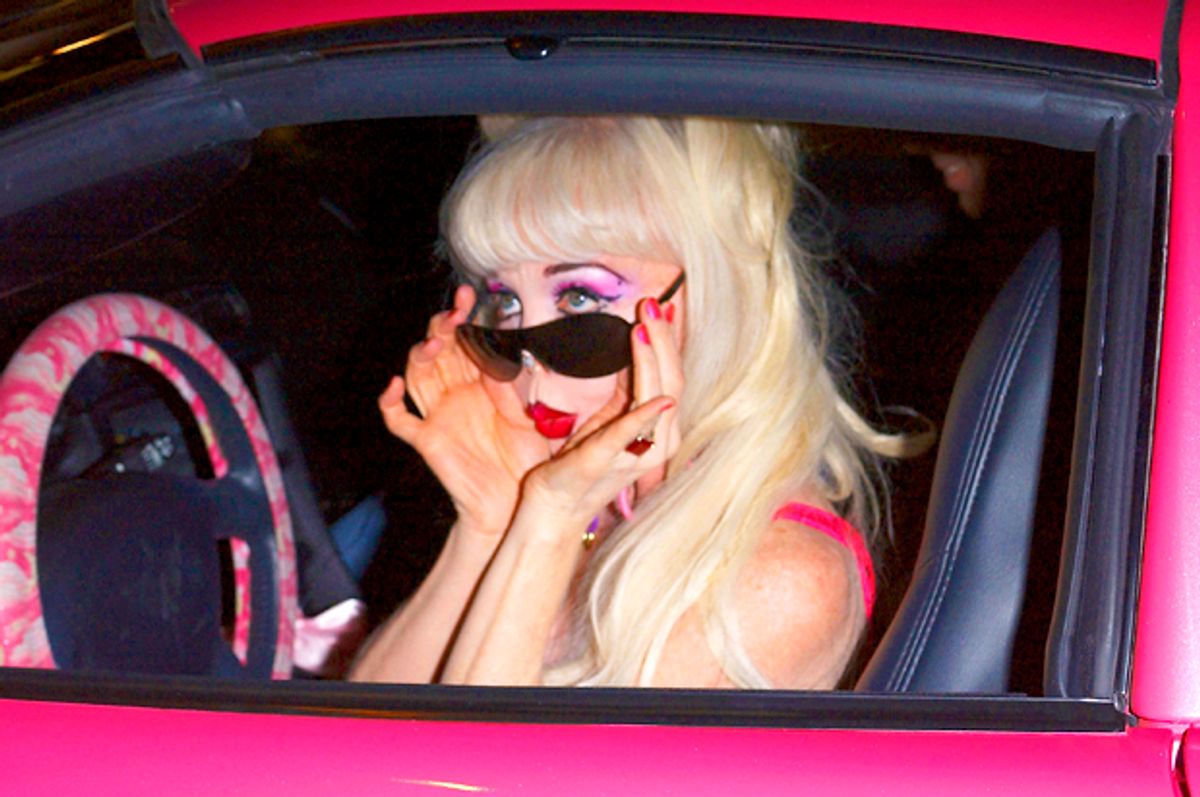 When is it no longer acceptable to divulge a celebrity's secrets?

The blonde bombshell Angelyne hasn't been in the public eye since the 1980s and 1990s. Back when she was posting cryptic billboards throughout Los Angeles — all of them showing nothing but her alluring image and the mononym, Angelyne — she was a high-profile celebrity, pioneering the famous-for-being-famous brand later capitalized upon by the likes of Paris Hilton and Kim Kardashian.

Yet come 2017, Angelyne's star has faded, which makes it all the more bizarre that a genealogist would approach a journalist from The Hollywood Reporter to explain that he had discovered her actual identity. After the reporter did his own investigative work and confirmed that the genealogist was correct, he went forward to reveal that the mysterious Angelyne was in fact Renee Goldberg, the daughter of Polish Holocaust survivors who had already finished up a short-lived marriage to the son of a Beverly Hills executive more than a decade before she became famous.

If this seems like an unremarkable backstory (made mildly more interesting for its intersection with the Holocaust), take a look at how Angelyne responded to The Hollywood Reporter's Gary Baum when he approached her with the genealogist's findings.

"I know you want it to be true because you're Jewish — and that's adorable!" This last word was enunciated with her breathy falsetto inflection, a stagey girlishness that Paris Hilton appropriated. I told her, without success, why my interest was justifiable on journalistic terms. She nodded, unbowed: "Is your editor Jewish?"

She bid me goodbye with a hug — "I know you love me and don't want to hurt me" — and a promise that I'd hear from her lawyer. Angelyne also stated that it's her inalienable right alone to share her story as she sees fit — or not. (Earlier, regarding the details of her past, she'd told me, "I want to save it for my memoirs; that's my right for my own financial interest.") Later, when I left, I saw her on the sidewalk beside her Corvette under a translucent pink umbrella, huddled in what appeared to be an intense conversation with [her assistant Scott] Hennig.

Two things become immediately apparent based on Angelyne's response here: First, in addition to the semi-plausible claim that she's preserving her identity for her memoirs, Angelyne's desire for anonymity seems to be somehow linked to her Jewish identity (she mentions both the reporter's heritage and that of his editor); second, she perceives the publication of her personal background as something that would "hurt" her.

There is also this detail revealed by her ex-husband, Michael Strauss whom she divorced nearly fifty years ago:

Strauss explained that Goldberg's childhood had been difficult. Her father, a man with a concentration camp number tattooed on his arm, had been controlling, cruel and narrow-minded, propelling her to flee home early. Like many survivors of trauma, Henry didn't discuss it. This extended, to Strauss' memory, as far as Goldberg's own history; her father told her she was born in Israel, not a German displaced-persons camp. Regardless, "she has never considered herself Jewish."

In addition to reinforcing Angelyne's obvious hesitation about being identified as Jewish, there are also strong indications that she was victimized by some form of abuse from her father.

While none of these details offer a conclusive explanation as to why Angelyne wishes to keep her identity secret, they do strongly suggest a number of deeply personal reasons linked to individual trauma. So why, then, was it necessary for The Hollywood Reporter to unmask her?

This isn't to say that all celebrity secrets ought to be kept. If a celebrity is harming innocent people (say by committing crimes or domestic abuse) or if their scandal pertains to the career that made them famous (such as a sports star using performance enhancing drugs), that is obviously newsworthy.

But what about Angelyne, a celebrity who hasn't been in the public eye for years, whose personal story in no way pertains to why she was famous, whose leaked information did not involve her hurting anyone — and, most importantly of all, who seems to have strong emotional reasons for not wanting her information known to the public?

There are occasions when the curiosity which fuels journalism should be tempered by compassion toward the individuals whose feelings might be trampled in its wake. It isn't the worst thing in the world for Angelyne to have been unmasked against her will, but its deeper implications are uncomfortable to contemplate.