On Rikers Island, a move toward reform causes trouble

Inmates in a new secure housing unit risk harm while shackled to desks, according to a NYC BOC report 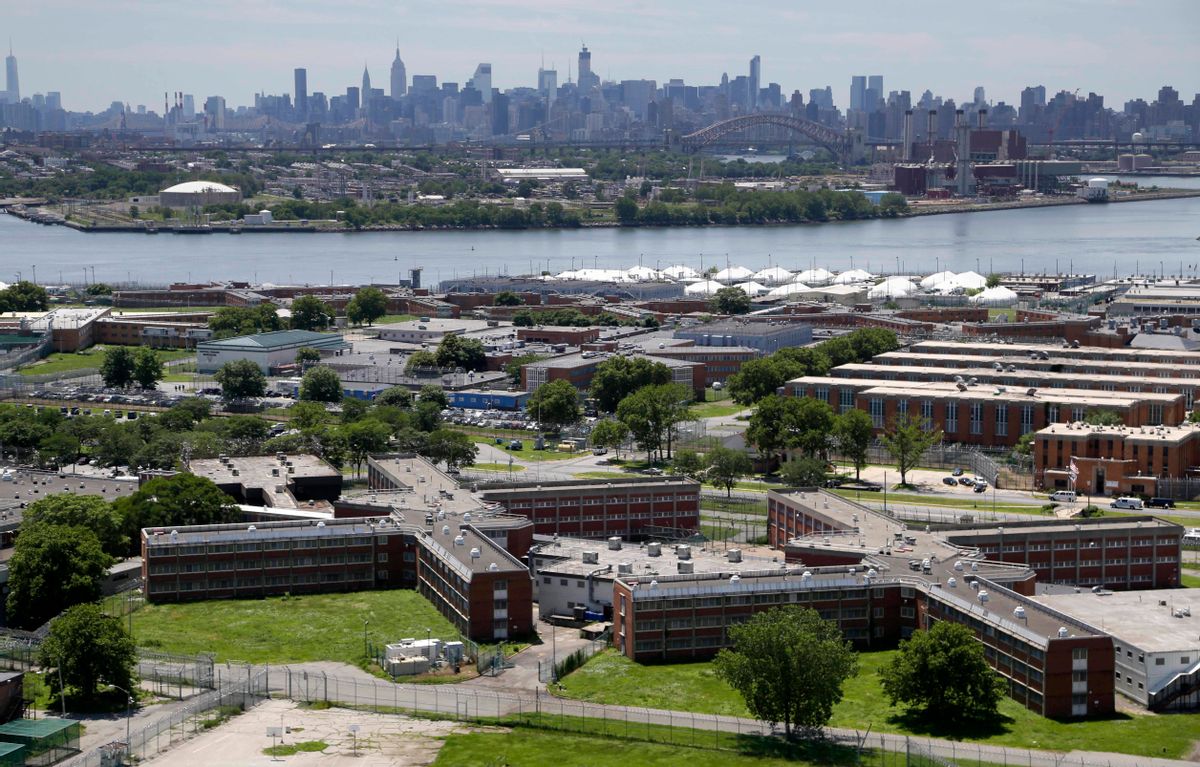 NEW YORK — On Rikers Island, in a cell block for the jail’s most violent inmates, young men sit for hours, feet shackled to “restraint desks.”

The school-like desks, outfitted with chains and locks, are located in specialized cell blocks called Enhanced Supervision Housing units. In the most secure levels, inmates who have committed violent infractions — caused injury to another inmate or guard, or attempted to stab or slash someone in jail — can leave their cells for a minimum of seven hours every day, but must be locked to the desks for much of that time.

Officials said they created the units as a more humane alternative to solitary confinement and that the units helped make Rikers the nation’s first jail to stop isolating young inmates. But a new report from the New York City Board of Correction suggests they may have traded one problematic practice for another.

Inmates have been able to finesse their way out of the shackles to attack others as they sit defenseless. One young man, chained to a desk, was slashed in the face while trying to use a phone on the cellblock floor. Another was unable to fight back when he was jumped by four men.

The report released Monday focused on the lives of young adults in these units, which opened first to older inmates in 2015, and a year later, to inmates under 22. It found that inmates often weren’t told how long they’d have to live in the specialized housing units. Some stayed for as little as two days; others, several months. The units are broken into levels, the most secure of which use desk restraints. The board found that many young adults were not given a hearing to determine whether they needed to live in such a restricted environment.

Young adults began moving into the Enhanced Supervision Housing units in September 2016. Over the following six months, they were involved in six slashings in the units. Nearly 40 percent of all unit inmates suffered some form of injury. Rikers officials have long sought to bring down the number of slashings, fistfights and other violent episodes that plague the facility near daily. Neither the board nor the department provided specific details on how inmates smuggled weapons into the units or broke free of their shackles to harm one another.

Some inmates were so scared they refused to leave their cells unless they were allowed to sit, shackled, in what they considered to be the safest part of the room. Others were forced to sit in restraints only because they wanted to attend class, even though they were not deemed enough of a safety threat to live in a more secure unit.

The board found that those who took the risk were not particularly well-served by the classes. The report noted that “young people experience significant distractions during the school time.” The inmates chained to desks are surrounded by inmates in cells who yell and taunt them. A search dog’s barking echoes through the unit. Class often starts more than an hour late.

Rikers officials have insisted that the units are not meant to punish unruly, violent young prisoners, but rather keep other prisoners and guards safe.

Dr. Bobby Cohen, who sits on the Board of Correction, calls that a misrepresentation.

“When the Board voted to end solitary confinement for men and women under 22, we did not vote to chain people to desks,” said Cohen in an email to ProPublica. “The Department of Correction misrepresents reality when it says that shackling men's legs and chaining them together so they can't move is not punishment.”

The units are a response to the department’s decision to end solitary confinement, which research has shown can have a damaging psychological effect, especially on young people. In June 2015, 22-year-old Kalief Browder hanged himself at his mother’s home after spending much of the previous three years in solitary confinement on Rikers, only to have his robbery charges dropped. His turbulent time at Rikers was detailed in The New Yorker, and his death helped prompt pledges of reform at the highest levels of city government. Mayor Bill DeBlasio’s administration promised to end the solitary confinement for young adults on Rikers Island. In its place, Rikers officials have turned to the Enhanced Supervision Housing units.

The Board of Correction, which helps create rules on conditions of confinement in New York City, expressed dissatisfaction with the units earlier this year.

In a January hearing, board member Bryanne Hamill showed photos of young inmates chained to the restraint desks. She said the inmates told her they would rather be in solitary confinement. Members of the department, however, seemed unconcerned. Some, including former Department of Correction Commissioner Joseph Ponte, walked out of the meeting.

Ponte resigned in May, following a report by the Department of Investigation showing he had misused city resources and spent an inordinate amount of time out of state while the city’s correctional facilities struggled with violent incidents.

“Enhanced Supervision Housing has allowed New York City to be the first in the nation to eliminate punitive segregation for young adults,” he said. “It separates the most violent young adult inmates from the general population, while at the same time offering them educational opportunities. The level of security provided by these housing units allows even our most violence-prone young adults the chance to learn. We are working with the Board of Correction on the areas for improvement noted in their report.”

Department officials also pointed out that restraint desks have been used in jails and prisons in Colorado, California and Washington state.

The board acknowledged that in its report, but noted that outside jurisdictions primarily limit the use of restraint desks to two hours at a time.

Cohen, the board member, said that’s not the case at Rikers. He said that young adults at Rikers are often held for more hours across more days than in other places.

“Young adults have been held in leg restraints for months, and could be shackled without end. Restraints should only be used for the minimal amount of time necessary and only to ensure the physical safety of the individual and others,” he said. “As a doctor, I know it is harmful. It is degrading, it is unsafe, and it should stop now.”