Universal health care can work: But the case must be made for how to pay and how money will be saved 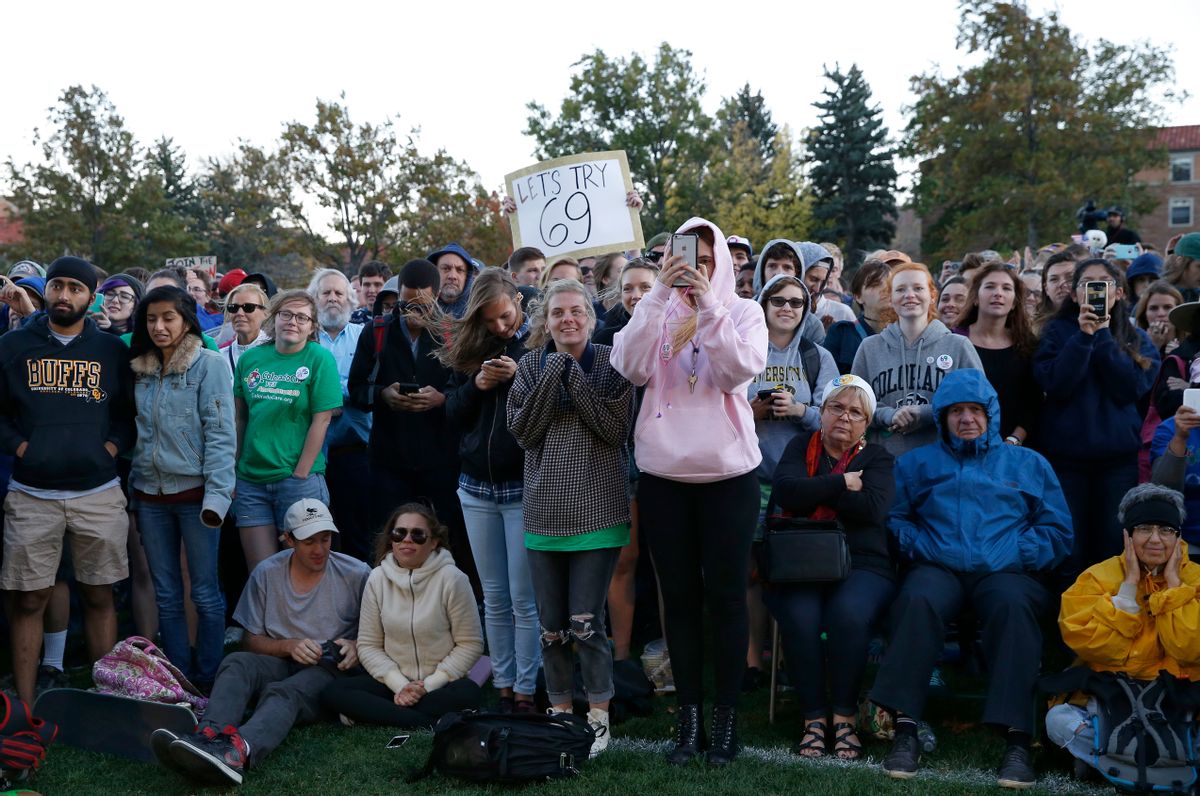 In this Oct. 17, 2016, photo, supporters applaud Sen. Bernie Sanders, I-Vt., who spoke at a rally in support of Colorado Amendment 69, a ballot measure to set up the nation's first universal health care system, on the campus of the University of Colorado, in Boulder. (AP Photo/Brennan Linsley)
--

Progressives are riled up with renewed seize-the-day determination to turn Congress’ failure to gut Obamacare and Medicaid into a push for nationwide universal health care.

“JOIN THE MOVEMENT,” shouted a typical email blast Monday from the Progressive Turnout Project, quoting Bernie Sanders and Elizabeth Warren, and, of course, asking for donations.

"I need your ideas re: Medicare-for-all," Sanders said via an email blast from BernieSanders.com.

There were suggestions on where to start transforming the system to create inroads leading to universal coverage, such as a Salon piece by Amanda Marcotte calling for a Medicaid buy-in for those over 50. Others, like Ann Jones writing for the Nation Institute, suggested expanding Medicare to create a Norway-like single-payer system in Maryland. Economists and policy experts writing on off-the-record listservs suggested lowering Medicare’s eligibility age and allowing consumers to buy into it, as its doctors and hospitals have a better record of getting paid than under state-run Medicaid.

Meanwhile, center-left voices like the Urban Institute posted pieces saying insurance markets for individuals can be stabilized by bipartisan cooperation, echoing remarks made in the Senate last week by Maryland Democrat Ben Cardin. There were like-minded editorials, such as in USA Today, urging bipartisan action. (On Tuesday, the Senate health committee announced early September hearings “to stabilize and strengthen the individual health insurance market.”)

Amid these frothy expectations, there were a handful of ex-Obama administration officials who were still keeping their eye on the prize — ensuring Obamacare is safe from President Trump's sabotage. He has threatened not to pay subsidies for 58 percent of individuals who bought policies via government exchanges. Trump is expected to announce the first of these attacks this week, although hospitals and doctors are protesting they would bear the brunt as it would drive up uncompensated care.

This tumult may end up temporarily sidelining the push for single-payer — whether by more chaos caused by Trump or the prospect of centrist legislation in Congress. But the push for universal health care will not go away nor will the strong arguments in favor of it. Americans across the political spectrum have learned their health care is vulnerable to swings of the political pendulum in Washington.

Yet those pushing for universal coverage need to step up their sales game and do better than offering the same talking points Bernie Sanders made 25 years ago and last week. (Exhibit A: Everybody knows other Western democracies do better than we do.)

Few Americans need to be reminded of the frustrations in the current insurance-based system. Yet few on the progressive end of the spectrum are talking about how funds can be raised to supplement what all government programs spend so the result is no person or business has to pay premiums, deductibles and co-pays.

That was where the conversation led by the California Nurses Association was heading, but it got blocked in deep-blue California, when the state assembly’s Democratic leader buried their bill in June. The nurses put forth a progressive financing plan, but Democrats in charge allowed a Senate fiscal committee to derail a progressive taxation debate by issuing a scaremonger report saying such coverage meant business and employee payroll taxes would double to pay for it. That was not the only revenue choice for single payer, even with the large sums involved. (The nurses said California has to generate another $150 billion a year on top of all government health spending in the state. In New York, where a single-payer bill has remained a few votes shy of passage for several years, that figure is roughly $90 billion.)

What we didn't hear was any discussion about how California could do it. Yet the state's economy is the size of Italy’s and its population equals Canada's — two countries that have universal coverage. The nurses suggested a 2.3 percent increase in the payroll tax and 2.3 percent increase in the gross business receipts tax after the first $1 million, to exempt small businesses. Nobody got to hear how that revenue-raising strategy would save businesses tons of money and paperwork, save people from unexpectedly emptying their pockets and create unheralded health security for every Californian.

The other key missing ingredient in the California legislature’s discussion was how a transition to a single-payer system would unfold. There were no wide press disclosures of who was making the biggest health care profits — the specific industry sectors, and how they would have to adapt. And there was little discussion of who should never have to pay for health care, like children and fixed-income seniors. The frames, analysis and funding didn’t change; therefore the politics didn’t change.

These are all topics that the public will want to know about and will likely welcome; a prerequisite to embracing a new system.

“The California and D.C. fights are identical,” said Michael Lighty, legislative director for the California Nurses Association, in an email to AlterNet. “On policy, the Urban Institute is wrong about the cost of improved Medicare-for-all, just as in California where the corporate Democrats and their protectors are creating a false narrative overlooking the savings, which are substantial driven by the elimination of the insurance company premiums, deductibles and co-pays.”

Lighty said that getting health care right would send numerous positive ripples through the economy, just as Trump’s threats and the GOP’s plans to go after Obamacare and Medicaid have done the opposite, creating chaos—threatening people and businesses with higher premiums, and many current Obamacare and Medicaid recipients with the loss of health care, and all that implies.

“Politically, single-payer public financing can drive a broader progressive program first because money spent improving health care and lowering costs reduces inequality, and the savings frees up money for wages, pensions, investments and growth,” Lighty said. “It is a reverse of the GOP program to take away health care to lower taxes on the wealthy. No, let’s equitably finance health care through single-payer to improve workers’ wages and living standards. We can achieve real health security.”

There’s another reason it’s important to talk about the financing. The White House and the GOP-led Congress want to take up tax reform as soon as they can. While it is anyone’s guess whether that will happen, progressive taxation is the key to paying for nationwide universal coverage. While that’s not the tax discussions the GOP has in mind in, it's an open invitation to return to one of the biggest benefits progressive tax reform could bring.

Moreover, should a bipartisan health care bill emerge in Congress this fall, progressives need to be mindful of what may or may not be stepping stones to universal coverage. When the Supreme Court preserved Obamacare’s subsidies in 2015, that ruling was a gift to insurers. That same ruling also said states don’t have to expand Medicaid programs to add in their uninsured, another gift to the industry by undermining competition and a pillar of what could evolve toward a universal system.

Tuesday’s brief statement by Senate Health Education Labor Pensions Committee Chairman Lamar Alexander, R-TN, said their agenda was fortifying the industry and policyholders. “This committee will hold hearings beginning the week of September 4 on the actions Congress should take to stabilize and strengthen the individual health insurance market so that Americans will be able to buy insurance at affordable prices in the year 2018,” he said.

Beyond the Obamacare fixes sought by insurers, the conversation on listservs by some of the nation’s leading economists and safety net experts was filled with suggestions about what could concretely turn American health care toward a system that was not held captive by capitalists until Americans reach age 65 — the age they become eligible for Medicare.

One prevalent idea was to slowly lower the age people can access Medicare, including allowing anyone over age 50 to buy into it. While that could take a bite out of what’s spent by the insurers on care (because many chronic diseases tend to appear over the age of 65), it also could grow government-directed health care toward more universal coverage.

This discussion was driven by the value of not allowing the good to interfere with the perfect. But there were telling remarks that underscored how even stabilizing Obamacare and expanding Medicare doesn’t address the problems with the market-based system. Namely, today’s co-pays and deductibles can still drive households into unmanageable debt, if not bankruptcy.

Patching Obamacare for insurers alone by having the government chip in toward premiums, co-pays and deductibles, isn’t providing health security. It’s a constant reminder that too many households are one paycheck away from not affording health care when costs are driven by the capitalist desire to maximize profits.

Another formidable hurdle to the Medicare-for-all solution is overcoming the Hyde Amendment, which prevents the government from paying for most abortion-related services. That victimizes women and prevents them from accessing other reproductive health and breast cancer screening. It is yet another obstacle to universal care.

While incremental progress might be acceptable to centrists, it patches up a status quo that is rejected by progressives.

“Incremental reforms that ‘stabilize’ the insurance markets or provide individual purchase options fail to address high costs due to drug company prices, and insurance company inefficiency, profits and executive salaries,” Lighty said. “Rather than bail out the insurance companies by taking their costliest patients (via public option or Medicare buy-in), or subsidizing the purchase of private insurance, we need to guarantee health care as a human right, therefore a public good.”

“We’ve tried every other health policy that’s part of the U.S. ‘system’ (really a health care industry driven by revenue and profit) except improving and expanding Medicare-for-all,” Lighty continued in an email. “We’ve finally broken through on political feasibility thanks to the Bernie campaign and sadly the attack on the Affordable Care Act. This is a story of the people vs. the establishment, nationally and in California; the successful district-based actions to get House Democrats to co-sponsor HR 676, now a majority [of Dems] have and growing; the national grassroots organizing to promote single-payer at town halls; and the success of the [California] SB 562 campaign, including passing the state senate.”

“Medicare-for-all is on the national political table despite the bipartisan political establishment opposition to it,” he concluded. “Yet, many of the endorsements, resolutions and sponsors of single payer are symbolic. So what needs to happen is those who support single-payer, need to enact it.”

That’s more easily said than done. But as Trump lashes out anew and the Congress decides what to do next, there’s an opening.

Anyone who has followed the issue knows universal coverage isn’t going to be enacted or taken seriously by centrists in either party without a grassroots push and making the case in compelling new ways. This year's town hall testimonials by people who would be badly hurt by repealing Obamacare were an example of adding new voices and new urgency — and it worked.

As the California Nurses' effort verged on showing, there’s new detail and discussion awaiting—paying for it via progressive taxes; selling those savings to businesses, employees and the self-employed; and describing how a transition would unfold.

The status quo’s defenders have been out there for years reading from the same scripts, but these new arguments have not. The arguments for universal coverage will get stronger under Trump’s bullying, and if bipartisan fixes only stabilize revenues for the health care industry, but not the public.