"Sharknado 5: Global Swarming" makes us question why this keeps happening to us

For the fifth time, "Sharknado" comes to Syfy and we're past the point of diminishing returns. 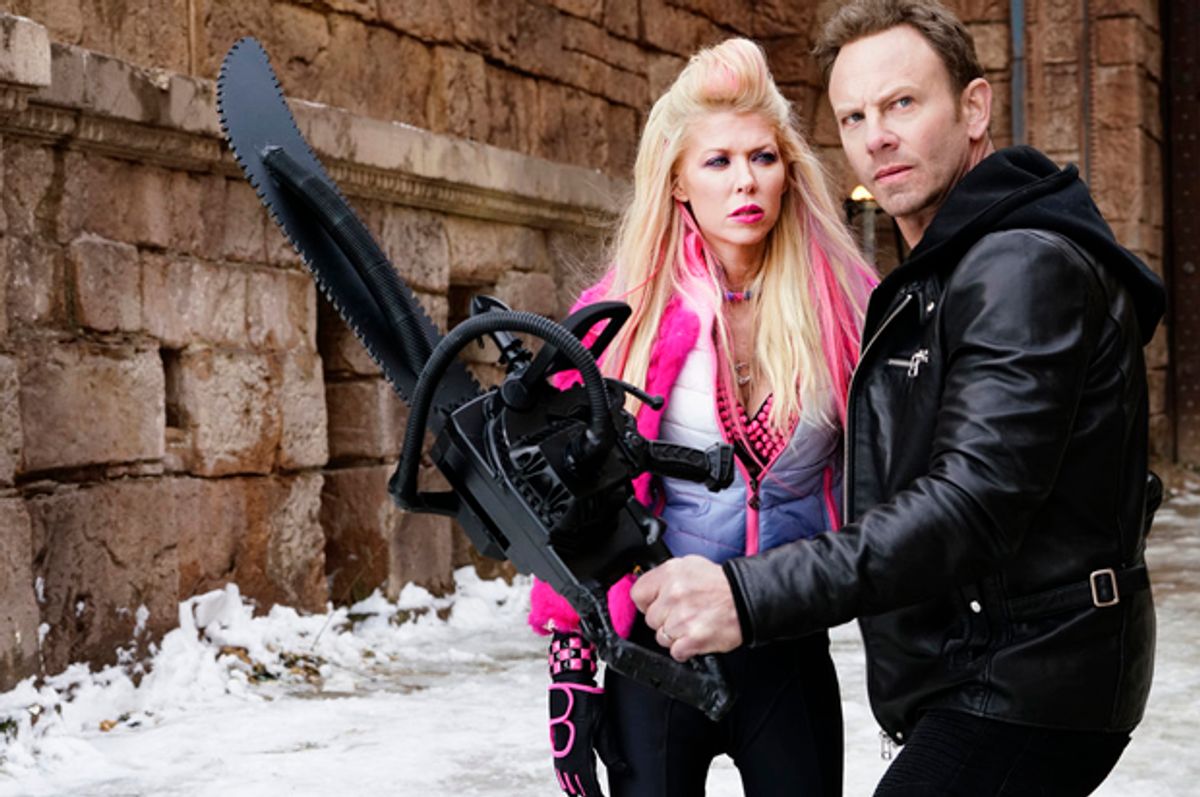 In order for the human brain to come to terms with why “Sharknado” exists, let alone generated four sequels, it helps to look at the franchise in terms of the employment it generates.

Many, many forgotten celebrities and Z-grade stars have enjoyed anywhere from 30 seconds to a full three or four minutes of small screen exposure in these movies, including Jedward, Bret Michaels and Fabio. Only in the world of “Sharknado” can Charo play the Queen of England, Fabio pop up as the Pope, and Tony Hawk saving the Sydney Opera House. Out of those three maybe Charo and Fabio can use the money or the exposure.

But who knows? Perhaps Charo has nothing better to do than smile down at Ian Ziering as he pulls a Party City’s finest plastic crown out of a very fake shark’s mouth. And that happens only after his character Fin Shepard rides it like a rodeo bull down what is supposed to be a Buckingham Palace staircase.

The “Sharknado” cinematic collection, one of the last vestiges of the Syfy that flailed to solidify its brand after “Battlestar Galactica” departed,  is a reliably efficient way to waste your valuable time on a Sunday night. This has always been the case, and indeed, part of the draw for “Sharknado” and its shriekquel “Sharknado 2” in which Judd Hirsch and Biz Markie did their part to battle airborne schools of nurse sharks, hammerheads and great whites, all ravenous for a taste of human ham.

And just so you know, I watched the first “Sharknado” and “The Second One” with joy in my heart and tongue lovingly nestled in cheek. Bad movies are a dandy treat no matter what the season, especially schlocky sci-fi flicks that display a loving, unapologetic awareness of their ridiculousness.

Now we’re on “Sharknado 5: Global Swarming,” debuting at 8 p.m. on Syfy, and I’m officially curious as to how long this dopey joke can go on. “Sharknado” stopped being funny two finned funnel fests ago, and its live audience numbers peaked with “The Second One” (actual title) in 2014, when 3.87 million viewers tuned in.

Number four in the series (“The 4th Awakens”) still attracted 2.77 million viewers who might otherwise have been making pies or scrubbing their shower tiles or watching “Cutlery Corner” on a home shopping network in their respective areas. Instead they chose to watch a former member of the “Beverly Hills 90210” cast filet a series of digital sharks that can swallow people whole but, amazingly, can be felled with ice skating blades and parasols and even a well-aimed haymaker.

All of this is to say there’s absolutely no defensible reason to watch “Sharknado 5,” even if the tagline promises to “Make America Bait Again.” It has no environmental message to speak of — and before you scoff, the entire mythos, such as it is, began with a theory that these toothy superstorms were initially caused by climate change.

“Sharknado 5,” whose creation also buys groceries for director Anthony C. Ferrante (who I can confirm is a high quality human being!) fleshes things out a bit after one of its heroes, Nova (Cassie Scerbo), rappels down into a cave under Stonehenge and discovers our ancestors have left us warnings in the form of shark-like paintings on its walls. Conveniently Fin, his wife April (Tara Reid) and their son Gil (Billy Barratt) are preparing to address an international governing body in nearby London, presumably not about the Paris Climate Agreement, so Fin zips over to the site and pulls an Indiana Jones move that doesn’t work.

Instead of putting all of us out of our misery by being crushed by a runaway boulder, he and Nova unleash another version of the titular event that tears across the globe and opens up wormholes. From here “Sharknado 5” embarks upon a world tour that pays homage to the works of Steven Spielberg, Robert Zemeckis and George Miller in ways these filmmaker probably won’t appreciate. On top of this, the film’s various insults to accents and international relations commences with London but also jets through Switzerland before ripping through Australia, the South China Sea, Brazil and Italy.

Apologies if reading all of this makes you lightheaded. Watching felt worse, trust me. Nothing about “Sharknado 5” is worth recommending even if you consider it to be an American summertime tradition, as so many people do.

On the other hand, this is a film with a $3 million budget, $500,000 of which is allocated for Ziering’s salary. Reid, whose character is now a cyborg who wears Uggs, reportedly makes a quarter of that, but as Vox points out, an even higher crime is that Ziering made more on this movie than Gal Gadot was paid to star in “Wonder Woman,” which is closing in on the $800 million mark in worldwide box office receipts.

But again, a positive outlook helps people make it through these days that seems to be bent on driving the world more insane than it is already. Besides, while a number of Ziering’s co-stars in these films were recruited using his “Celebrity Apprentice” connections — including Donald Trump, who eventually passed on the offer, to run for president — others are fun to see if only for the “wait, isn’t that?” factor.

For example, “Sharknado 5” features Chris Kattan, the man otherwise known as Mango from “Saturday Night Live,” in the role of Britain’s prime minister. Five years ago that would sound like stupendously nutty casting but, I mean, look at the way things are going in the U.K. right now.

“Star Trek” legend Nichelle Nichols also plays a prominent political figure on the world stage, which we’d cheer in any other context but here just makes a person wonder if she’s made some unwise investments. Then again, Margaret Cho shows up for a hot minute, as do Clay Aiken, Bret Michaels and Olivia Newton-John. We also get to see Samantha Fox and Downtown Julie Brown, which is a nice treat for children of the ‘80s.

A bit more expected are cameos from the NBC Universal family such as “Today” staffers Al Roker, Kathie Lee Gifford and Hoda Kotb; they’re around as a matter of brand loyalty.

Then we have Geraldo Rivera who, if memory serves, plays a mad scientist in a blimp. (I should say I think he was a mad scientist; to be honest I lapsed in and out of consciousness several times while watching “Global Swarming” even though I assure you, my eyes were open the entire time.

Again, just focus on the fact that this project enabled a number of celebrities to secure a paycheck that would not have materialized without “Sharknado 5,” and perhaps that will help the stomach chum created by thinking about it to stay down.

Otherwise brace for the gale force of sucking, and reconcile yourself with the knowledge that there will probably be a “Sharknado 6.”