"Tacoma," the next video game from "Gone Home" creators, imagines the gig economy in space 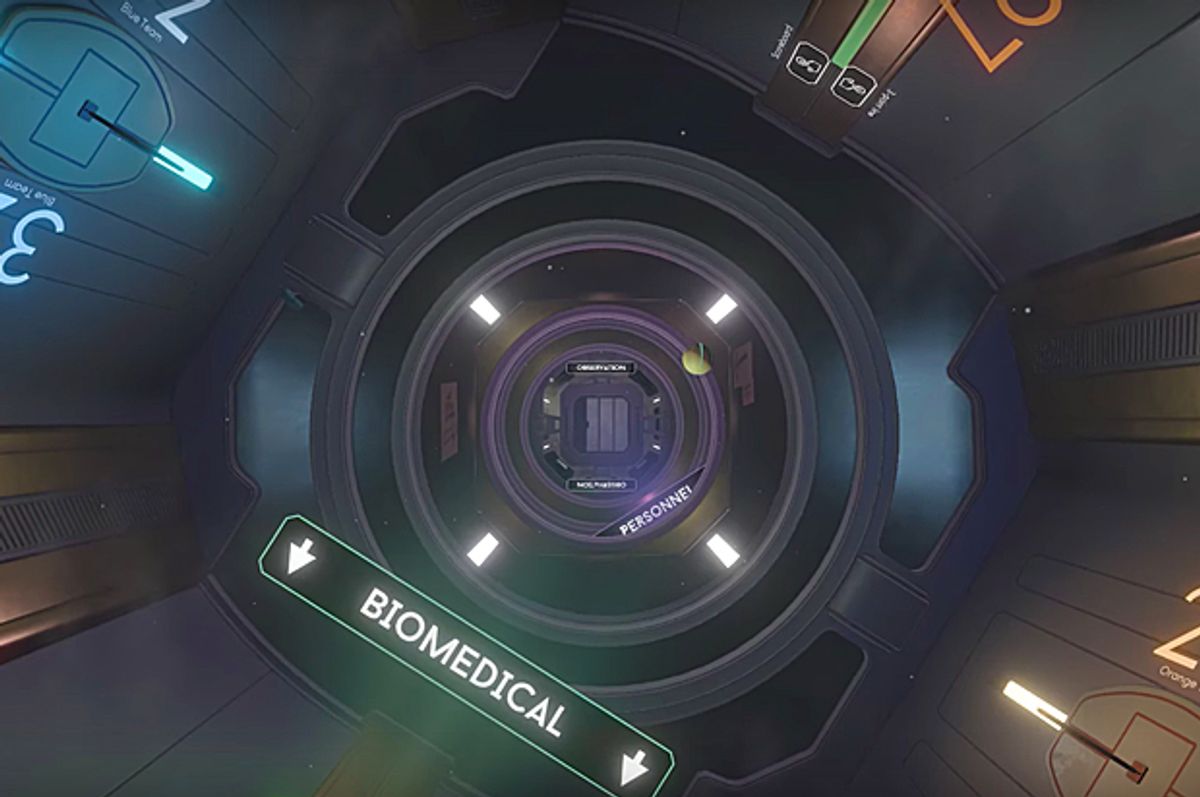 The video game may be the only artistic genre that has its origins in war. Early computers were funded by the Department of Defense, eager to computerize its ICBMs and simulate Soviet-U.S. nuclear scenarios; hence, the first computer games were arguably war games. That was a very long time ago indeed, and yet, the Pentagon still has its dirty mitts in video gaming; over the past 18 years, the Army has funded 41 first-person shooters under the “America’s Army” series, which served partially as recruitment tools.

Indeed, for much of the twentieth and early twenty-first century, the most popular video games all reflected the genre’s origins: first-person shooter series like “Halo,” “Counterstrike,” “Doom” and “Quake” glamorized warfare and glorified the mythos of the individualistic, lone hero. More literary, novel-like adventure games — like Cyan's acclaimed "Myst" series — were the exceptions to the pistol-packing rule. Indeed, during the '90s and early '00s, two studios, LucasArts and Sierra, were responsible for creating the majority of popular adventure games, though some pontificated that adventure games withered after LucasArts ceased being invested in the genre in the '00s.

Yet in the past decade, it seems like game makers have truly overcome the Pentagon hangover. Indeed, there has been a creative flourishing as of late — not just of adventure games, but of games that defy conventional wisdom over what makes a popular video game. Part of this is audience, as video gamers are no longer prototypically male and young; indeed, half of all gamers are now women. Moreover, the hurdles to video game creation have disappeared: more people know how to code, and the difficult-to-program game engines are now off-the-shelf accessories that make game creation much easier. If peering over a gun barrel or strategizing a battle aren’t interesting to you, this is a great time to be a gamer.

“Tacoma,” the newest game from the Portland-based studio Fullbright, falls under the category of games that defy gaming stereotypes. Like the studio’s previous 2013 game, the critically and commercially acclaimed “Gone Home,” “Tacoma” more resembles a work of literary fiction than a Stallone movie. It is the 2080s, and you play the role of Amy Ferrier, a subcontractor who is hired by the Venturis Corporation — which deals in luxury resorts and timeshares — to investigate the disappearance of the company’s contractors working on the eponymous space station, which is situated at the Lagrange point between the Earth and the Moon. The space station is large, and of a design that will be familiar to sci-fi enthusiasts — its multiple concentric rings take advantage of centripetal force to create an artificial gravity. Rather than appearing sterile, though, the space station Tacoma looks homey; clothes, books and wrappers are strewn about, like a college dorm whose residents have gone slightly stir-crazy.

While the death and/or disappearance of one’s employees seems ominous, it becomes apparent from the game's start that Venturis may be less interested in its employees and more interested in the status of the ship’s computer. The Tacoma is managed by a large and expensive artificial intelligence that may or may not have gone haywire. Much of Venturis’ interest in Amy's services has to do with her downloading the A.I., rather than investigating what happened to the people — which sets up a drama immediately between Amy and the unseen corporate overlords dictating her tasks.

Many sci-fi depictions of space portray it as a profoundly lonely, austere experience — think “2001: A Space Odyssey” or even “Insterstellar,” whose ship was cold and utilitarian. Not here; the disappeared residents of the space station Tacoma have brought their entire lives with them to their dorms, lives that you as the protagonist are free to rifle through as you play amateur detective to figure out what went wrong. In doing so, you get a sense of the often-messy personal lives of the space station’s residents: children, family, friends, and even letters and personal effects documenting their fears and hopes.

Of particular interest is these contractors' relationship to the corporation that employs them. It is apparent that universities of the future are corporate-managed; there’s an allusion to “Amazon University at Buffalo” in New York, where one crew member's child hopes to attend (you learn this from a letter left out on a table). Likewise, the workplace benefits system becomes an interesting plot point: crew members receive something called "loyalty," a points system akin to accruing money in a 401(k). One gets the distinct impression that "loyalty" is but another means by which the Venturis Corporation creates a malleable workforce; the threat of losing loyalty, or being unable to transfer one’s loyalty accumulation to another company, looms in the crew's lives.

Hence, “Tacoma” is a game as much about labor politics, and the exploitation of contractors, as it is about personal relationships. Karla Zimonja and Steve Gaynor, the two co-founders of the company that developed “Tacoma,” explained how they plotted out a slightly dystopian future. “Every work is a product of its time,” said Zimonja, adding that the decision to ground the game in the current generation’s labor struggles “kind of came procedurally.” “We didn’t start with a political message or issue,” Gaynor added. Rather, the opposite: “We start from, okay, it’s on a space station — who is on it?  Why are they there?”

Gaynor and Zimonja noted how the space station’s design would likely have been different in a different era. “If we were making this game in the sixties, it’d probably be an idealistic science research station that was created by a League of Nations,” Gaynor said. But nowadays, it’s different . . .  why would there even be stuff in space 70 years from now? It’s all SpaceX and commercial space flight and NASA partnering with commercial and private companies. If there’s stuff out in space, it’s probably for tourism and industry.”

As you guide Amy Ferrier around the ship, downloading and extracting data files, you also learn that these spacemen and spacewomen bear a passing resemblance to the situation of the astronaut/soldiers in “Starship Troopers” — another parable about the free market transported to space, albeit with more undertones of militarism and nationalism. In “Starship Troopers,” you might recall how citizenship was contingent on military service; similarly, in the “Tacoma” universe, one’s ability to enjoy what were once the fruits of a normal welfare state have been consigned to the private sector, contingent on one’s abilities to be a good contract laborer. In the space station's gym, you discover that the Venturis Corporation rewards the Tacoma contractors with additional benefits for following company-specific exercise regimes, which they've gamified. Likewise, employees are rewarded for buying into Venturis' “orbital timeshares,” and see company-sponsored advertisements when logging into their terminals and riding the elevator.

The analogy to the gig economy is hard to miss. Recently, ridesharing giant Uber began to facilitate car loans to its drivers, and then automatically deduct money from their paychecks to pay for said cars. At the time of the announcement, many commented that the scheme sounded much like indentured servitude. Tacoma's crew has echoes of this: It is evident that many workers on the “Tacoma” are unhappy with their situation and isolation, but also reliant on their employer for their livelihoods.

“Power struggles are a thing that’s pretty safe to bet on for the future,” added Zimonja. “Even if it doesn’t look exactly like what we have today . . . you’re gonna know it when you see it,” she said.

“Hopefully it feels both believable and not too familiar -- like a future, or a version of a future, that you can kind of see some timeline of ours potentially leading towards. Like this is a thing that feels relatable,” Gaynor added.