"Game of Thrones" recap: "The Spoils of War," paid for in fire and blood

Dragons are glorious, but war is hell 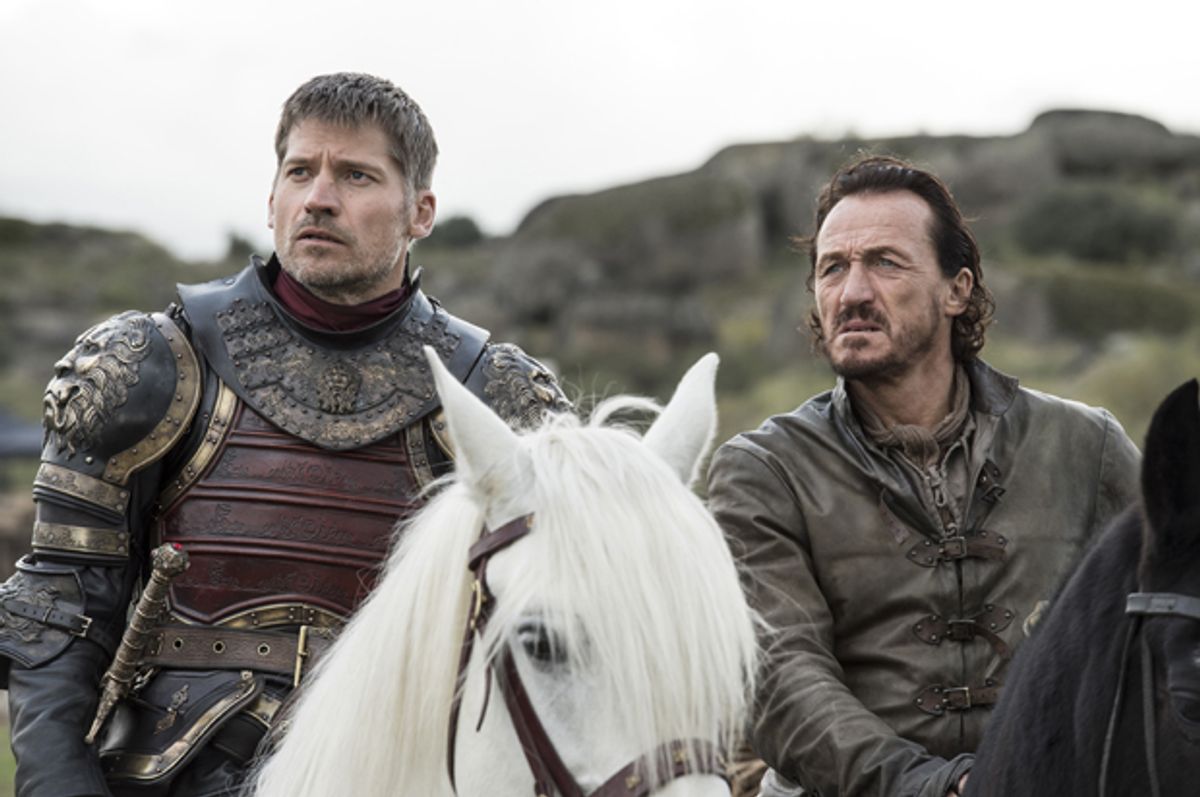 Nikolaj Coster-Waldau and Jerome Flynn in "Game of Thrones" (HBO/Macall B. Polay)
--

Northern tradition dictates that there must always be a Stark in Winterfell. Now there are three.

At Casterly Rock, however, nobody’s home. No family, no Lannister soldiers, and now, thanks to a ululating horde of Dothraki and the Mother of Dragons, no incoming supplies from the Reach.

“The Spoils of War,” the fourth episode of this latest season of “Game of Thrones,” is basically a very short double feature. One story is a profound family drama centered upon reunions and realizations that A Girl and her crippled brother can go back to the place of their birth only to find that home isn’t really home anymore. The other is an action film ablaze with pride, flames and wailing.

In this tale of reunions and first-time meetings, the quiet moments vibrate with as much power and significance as that battle scene we’ve been spoiling for. Fire and blood were promised, and Khaleesi Daenerys Targaryen (Emilia Clarke) served it to her horseman army on a spit that extended through lands once loyal to the Tyrells. Although it wasn’t as drawn out as the Battle of the Bastards, Dany’s hot ambush looked just as appalling, though death by mud and suffocation seems like a worse way to go than instant immolation.

This battle marks a drastic switch from the blather-heavy front half of Season 7, and admittedly dialogue has been necessary to flesh out the parallel storylines of Dany and her browbeaten counselors Varys (Conleth Hill) and Tyrion Lannister (Peter Dinklage), and the action at Winterfell. Years have passed since Sansa (Sophie Turner), Arya (Maisie Williams) and Bran (Isaac Hempstead Wright) have been together in one room; now that they are, "The Spoils of War" shows how radically events have transformed these highborn children. Sansa has matured into a lady, but not the delicate queen she dreamed of being. Bran is no longer Bran, but the Three-Eyed Raven. Arya is a killer.

But elsewhere, as a frustrated Daenerys points out to her counselors and her guest Jon Snow (Kit Harington), three dragons are in play.

Many elements of “The Spoils of War” make it perhaps the most visually stunning of the seventh season so far, as Jon takes Dany into the caves beneath Dragonstone to show her the mountain of obsidian, and conveniently, a few glyphs carved into the walls made by the Children of the Forest, which Jon somehow knows. He explains that the cave paintings show that the Children and the First Men fought together and against the White Walkers.

And if Dany doesn’t believe Jon, a plot hurdle that's only slightly plausible in itself, maybe she’ll believe that ancient cave graffiti.  “We need to do the same if we’re going to survive, because the enemy is real,” he says. ”It’s always been real.”

They draw closer, and in silence, seem to be getting a little flirtatious. Then she agrees to fight for him, “after you bend the knee.”

The last Targaryen seems a tad obsessed with the details of decorum, given the threats spiraling around her.

But maybe the plot wouldn’t be as satisfying if Jon didn’t have to fight for the support of those dragons. Regardless, intrigue and treachery have helped viewers maintain their patience and justify all the talking leading up to this juncture. But remember the rule of Chekhov’s gun: You don’t bring a weapon onto a stage unless you intend to use it. Wordplay and verbal sparring are fine and all, but we’ve sauntered past the halfway point of season 7 without the slightest taste of “dracarys.”

Until this episode, that is, when Drogon and the horde ambush Jaime (Nikolaj Coster-Waldau), Bronn (Jerome Flynn), the Tarlys and the Lannister army in the Reach, with all the plunder they’d taken from Highgarden. The battle was terribly exciting and terrible to behold, and D.B. Weiss and David Benioff toyed with our emotions by showing us the reality of this war, up close. We’ve seen a great deal of violence and gore on “Game of Thrones,” but here, we see Westerosi men cooking in their armor or turned to ash in a single exhale of flame.

For Tyrion Lannister, watching from a nearby hill, some of the conquered were probably soldiers he led to victory at the Battle of Blackwater.

And Benioff and Weiss deserve some credit for concisely laying out this gruesome toll with precision, even granting a preview for the senses, so to speak, when Jaime and Bronn ask Dickon Tarly (Tom Hopper) what it was like to experience his first battle at Highgarden.

“It was glorious,” Dickon tells them, until he’s pressed. Then he admits, “All my life we’ve been pledged to House Tyrell. I knew some of those men. I hunted with them.” And worse: “Didn’t expect it to smell like that.”

Indeed. What the audience sees is the glory of a white-haired queen, face screwed up in aggression, sailing through the clouds to take on her enemy. But as much as we’re cheering for Daenerys, we also find her enemies endearing. When “The Spoils of War” pits Bronn versus Drogon and Daenerys versus Jaime, that’s where the true dramatic stakes of these closing hours of “Game of Thrones” kick into high gear at last.

As Melisandre pointed out to Varys in “The Queen’s Justice,” nearly all of the fictional objects of our affection are going to die. We lost Catelyn Stark and Ned in previous seasons, and just last week “Game of Thrones” knocked off Westeros’ most elegant O.G. Olenna Tyrell (Diana Rigg).

Now we’re down to the deaths that are going to leave a bruise. Jaime may be pledged to the side we don’t want to win — a side, we should mention, that just robbed a bunch of farmers. But the thought of him dying on a fiery field or at the bottom of Blackwater Rush, which is what we’re left with when the episode ends, is frightful. Then again, if Bronn hadn't knocked Jaime into the water, he may have killed Dany.

Bronn’s also a favorite — brutish, greedy, unrelentingly honest and hilarious. Weiss and Benioff had him shoot Drogon with a deadly projectile from a ballista, hurting him enough to ground the dragon, but thankfully, not killing him. Nobody wants Drogon to die — he’s basically this world’s version of White Fang. But nobody wants Bronn to go down either, yet both of these are likely. Just not yet.

“The Spoils of War” is the shortest "Game of Thrones" episode so far, clocking in at just over 50 minutes and proving that a sojourn through Westeros doesn’t have to be the length of a feature to deliver a knockout punch. Actually, one of the best battles didn’t require scores of armed men, but merely two skilled fighters, Arya and Brienne (Gwendoline Christie) sparring in the courtyard of Winterfell.

Williams is one of the most dynamic members of this cast, and in this episode she displays all of her colors as she intimidates the guards blocking her way at the gate, then reunites with Sansa and Bran. In the behind-the-scenes segment, the producers say they modeled Arya’s homecoming on that of the Greek hero Odysseus, and a person can see Williams channeling the calm weariness of the prodigal hero through her performance.

The actress also makes Arya quite frightening. Impressive, certainly, to Brienne; seeing the fighters grin at one another after they fight their way to a draw was one of the emotional high points of “The Spoils of War.” But when Sansa sees her cat-like sister prove to be a match to her magnificent guard, she’s doesn’t look impressed. She looks worried — and Littlefinger  (Aidan Gillen) even more so.

That’s because there’s no getting around the fact that Arya wears her Stark name like a Faceless Man’s mask, just as Bran has shed his to assuming the boring, flat affect of the Three-Eyed Raven — all-seeing, all-knowing and all kinds of dull. Sansa, too, is a Lady Stark twisted into metallic hardness by the Boltons and Lannisters. And as Sansa welcomes Arya back into the fold, she seems to know that it’s not her sister that breached the gates of Winterfell, but an aspect of the Stranger.

Three Starks are at Winterfell, but none of them are truly at home. Two sons of Casterly Rock are on opposite sides of a sea of flames and blades, and one motherless, fatherless daughter of an abandoned house stands between them. The dead are marching down from the North, but death has already landed in the Southern kingdom, and the numbers have been whittled down to the main players. And as “The Spoils of War” ends, we’re left holding our breath to see which of them we’ll be mourning first.