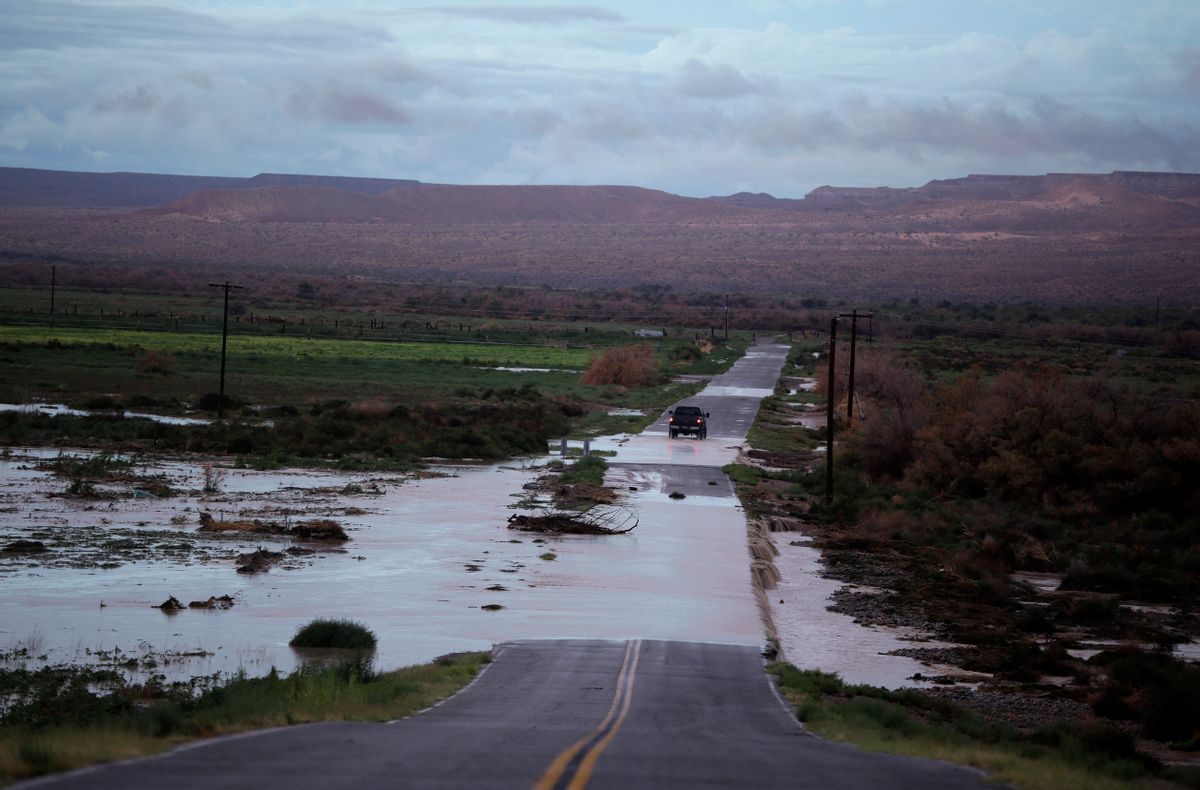 FILE - In this Monday, Sept. 8, 2014 file photo, a truck crosses floodwaters on a road in Moapa, Nev. Monsoon season in the Southwest, which officially ended Sept. 30, will go down as a record-breaker. Meteorologists say some areas in Arizona, Nevada and New Mexico received more rain in one day than in a normal summer. The intense amount of moisture also brought flood damage that is still being felt in homes and roads throughout the region. (AP Photo/John Locher,File) (AP)
--

Summer in Arizona and throughout the Southwest is monsoon season, which means a daily pattern of afternoon thunderstorms, flash floods, dramatic dust clouds and spectacular displays of lightning over the desert.

As the climate changes, Arizona’s monsoon rainfall is becoming more intense even as daily average rainfall in parts of the state has decreased, according to a new study. Increasingly, extreme storms threaten the region with more severe floods and giant dust storms called haboobs.

Every summer, rivers of moisture in the lower troposphere — the monsoonal flow — stream into the Southwest from the Gulf of Mexico and Gulf of California. Nearly every day in midsummer, the sun heats the mountains and the deserts, creating convection. The rising warm air allows thunderclouds to build during the day before exploding into dramatic electrical storms in the afternoon and evening.

But today’s monsoons aren’t like the ones travelers on Route 66 would have driven through 60 years ago.

“During the monsoons, precipitation is coming in more extreme events,” said study co-author Christopher Castro, an associate professor of hydrology and atmospheric sciences at the University of Arizona in Tucson. “What we find is because atmospheric water vapor has increased, especially downwind of the mountain ranges, as these storms grow and organize, they’re larger and more intense than they used to be.”

Extreme weather, including more intense rain, snow and flooding, is becoming more frequent as the climate changes because the warmer air in the lower atmosphere is able to hold more moisture. Since the 1950s, extreme events have increased in every region of the U.S.

This summer, southern Arizona experienced its hottest June and wettest July on record. In June, Tucson recorded its first triple-digit daily average temperature. In the days following soaring triple-digit heat in July, monsoonal moisture pounded the Tucson metro area with intense rainfall and flash floods, shattering a daily rainfall record in a single hour on July 15, according to the National Weather Service.

This summer’s weather in Arizona is part of a pattern of increasingly ferocious monsoons that has been shaping up for decades, Castro said.

The new study was published in the Journal of Applied Meteorology and Climatology. Using more detailed and localized precipitation information than is standard for weather data, Castro’s team compared monsoon rainfall throughout the Southwest from two periods — 1950 to 1970 and 1991 to 2010. The team found that Phoenix and many of the state’s low deserts saw rain falling in much more intense bursts. This happened even as the daily average rainfall across most of Arizona decreased by as much as 30 percent in some places.

The most infamous haboob rolled over Phoenix like a tsunami of dust in July 2011, just outside of the scope of the study, Castro said.

“This is happening even as the total monsoon precipitation is declining. This is not good news,” said Richard Seager, a professor at the Lamont-Doherty Earth Observatory at Columbia University, who is unaffiliated with the study. “Heavy precipitation events increase flood risk and also soil erosion. However, this is occurring at the same time that ecosystems, including rangelands, will be stressed by overall reduced water availability during the summer season.”

Seager said it’s an example of how global warming changes a region’s hydrology in a way that stresses people, communities and ecosystems.

David Gutzler, a climatologist at the University of New Mexico who is unaffiliated with the study, said the research shows that climate change is leading to more intense storms — exactly what scientists expect to see as the atmosphere warms.

The study’s detail should help authorities throughout the Southwest plan for more flooding, he said.