In “Wind River,” Taylor Sheridan makes another new-looking western with a traditional spirit

What’s at the heart of Sheridan’s thematic trilogy? 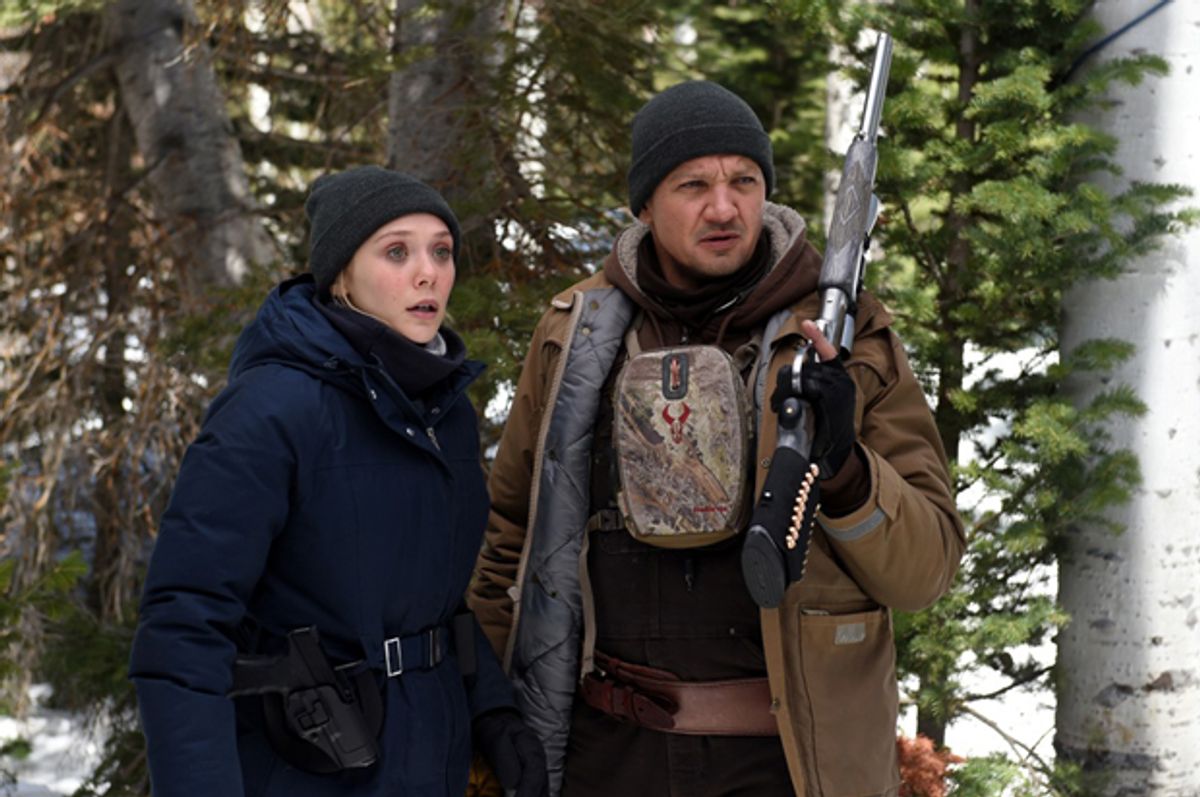 In Taylor Sheridan’s movies, motorized vehicles are conspicuous. Whether it’s an outlaw making his escape in a stolen sedan, American authorities pursuing a criminal in a pack of black government SUVs or a lone hunter kicking up white Wyoming snow with his snowmobile, the roar of an engine rings of what is absent: horses.

Sheridan’s first three films (“Sicario,” “Hell or High Water” and his newest, “Wind River”) are Westerns, set respectively around the border between Mexico and Arizona, in West Texas and in Wyoming. But Sheridan won’t let you forget that his West is not the old West. Aerial shots portray the same landscapes, barren of everything but sand or snow, that 19th Century settlers might have encountered. But when the camera zooms down to ground level, time’s toll is impossible to miss. Towns are developed and suburbanized; revolvers are no match for automatic weapons; horsepower is preferable to horse power; “cowboy” is used ironically (in “Sicario”) or derogatorily (in “Wind River”); and women hold power.

“They’re a thematic trilogy,” Sheridan recently told Vulture of the three films. “Each is exploring the modern American frontier and how it’s changed since being settled — how much do the consequences of actions taken 130 years ago reverberate today?”

There’s no barometer for time’s reverberations. But suffice it to say that the actions taken 130 years ago come with at least three movies’ worth of consequences. Each film, more or less, takes on a different reverberation. In “Sicario,” it is drug and border policy; in “Hell or High Water,” it is the banks’ control of land; and in “Wind River,” it is Indian removal.

In each movie, entrenchment leads to crime. When men have no other way to make money, they sell drugs; when a man needs money in a hurry in order to keep his family’s home, he steals; and when lonely men are stuck in desolate lands without any entertainment but booze and drugs, they rape. (In Sheridan’s films, men are always the criminals.)

The American West has long been a symbol of freedom — a lawless land of wide open pastures and new beginnings. Not in Sheridan’s films. In “Sicario,” “Hell or High Water” and “Wind River,” the West is a noose constricting the prospects of those whose ancestors wound up on the wrong parcels of land. The tension at the heart of each movie is of control: The authorities’ ability to maintain order presses up against a man’s ability to protect and provide for his family.

Though Sheridan’s Westerns look different from the genre’s classics, they share that central tension. In her 1992 book “West of Everything: The Inner Life of Westerns,” the scholar Jane Tompkins argued that the Western “isn’t about the encounter between civilization and the frontier. It is about men’s fear of losing their mastery, and hence their identity, both of which the Western tirelessly reinvents.”

Sheridan certainly reinvents this fear. He went on to tell Vulture that, “[t]he true theme of the trilogy is failed fathers — how they failed and how they overcame that failure.”

In “Wind River,” like in “Sicario,” Sheridan takes us into a world where fathers have already lost their daughters. Cory Lambert (Jeremy Renner), a hunter and tracker whose daughter died three years prior to the film’s action, tells a friend, whose daughter’s murder serves as the central event of the film, that you can’t try to escape the suffering, you just have to live with it. But that’s not what he does.

Like Alejandro (Benicio Del Torro) in “Sicario,” Cory Lambert uses violent vengeance to cope with his pain. He tries to avenge his daughter’s death — an unsolvable mystery — by exacting punishment on this other girl’s killer(s). That he would do so is taken as a given. “I’m a hunter,” he tells his mourning friend.

Lambert does so alongside a small group of reservation policemen and a by-the-books cub FBI agent named Jane Banner (Elizabeth Olsen). Banner plays a similar role to the one Kate Macer (Emily Blunt) played in “Sicario.” She exists to put a leash on wolves, to take the Wild out of the West. Meanwhile, Sheridan introduces Corey Lambert by showing him sniping literal wolves as they prey on sheep. The metaphor is carried over from “Sicario,” a call-back to Alejandro telling Kate that she “should move to a small town, somewhere the rule of law still exists” because “You are not a wolf, and this is a land of wolves now.”

Corey Lambert is a kinder man than Alejandro. He encourages Jane and doesn’t point a gun at her head. But the characters serve the same function. Where women unsuccessfully try to impose justice through the system, men operating outside the bounds of the system successfully met out an old-fashioned form of justice. They respond to cruelty with cruelty, compensating for their failures with brutality. The law is no match for men who know how to shoot a gun and don’t have anything to lose. When you zoom in beyond ground level, into the very fabric of Sheridan’s films, the helical structure doesn’t look so different from the traditional Westerns in which cowboys rode horses.