"We really had a Warhol? ": Lisanne Skyler talks about her HBO documentary “Brillo Box (3¢ off)” 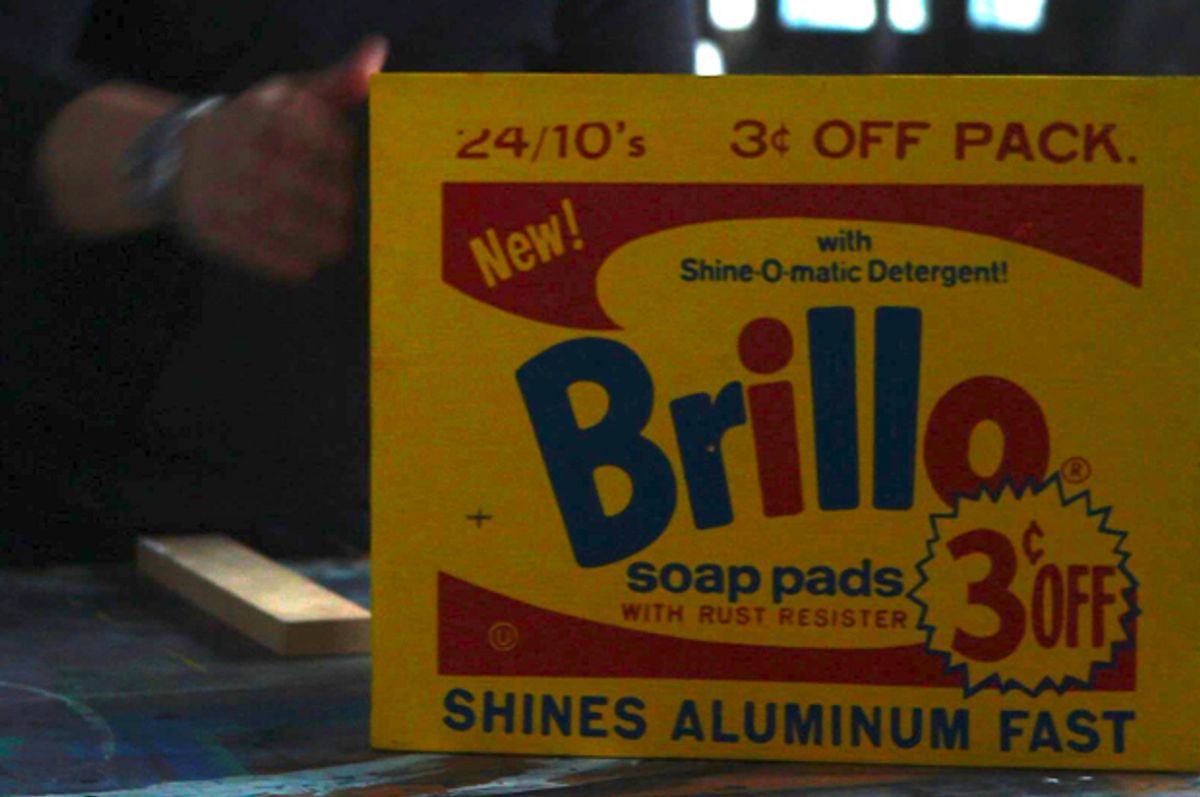 There’s a 40-minute documentary premiering this week on HBO that may not solve the Syrian refugee crisis or resolve our national political quagmire, but it’ll probably make you smile a little and give you a moment’s pause to consider the value of things, the importance of memory and the relevance of art in our lives. And you certainly will never see Andy Warhol’s 1964 work, “Brillo Boxes,” in which he created replicas of shipping cartons, the same way again.

Director Lisanne Skyler’s “Brillo Box (3¢ off)” tells a partial history of pop art through “Brillo Box,” and one box in particular; the one that her parents bought — and soon after, traded — in 1969 for $1,000 when she was a baby.

Salon spoke with Skyler about making the film that traces the life of the controversial art work until it’s sold, some 40 years after her parents bought it, at Christie’s for over $3 million.

You had this long history with the Brillo Box; how did you come to making the film about it?

This film had so many moments that pushed it forward. First, that picture of me in the family album was always a lingering mystery — we really had a Warhol? How did we get it? And why would we have parted with it? But aside from the family album, the first time I thought about the Brillo Box was at the 2000 MOCA show in LA. There was a room of white Brillo Boxes and then it really hit me that we once owned one and what a not-ideal thing it was to no longer have it.

I remember calling my mom about it. Then, years later, I directed a short fiction film called "Capture the Flag," based on the novel by Rebecca Chace, about a teenager realizing, over the course of an annual game of Capture the Flag, that her parents were separating, and her family traditions were coming apart. That theme of the fragile things that hold families together kind of stayed with me, and having only done either literary adaptation in fiction or docs in which I was entering a community as an outsider, I started thinking about my own family, my own story, and that picture of me on the Brillo Box in that family album. And the incredibly vibrant world my parents were once part of, how ahead of their time they were, and what larger-than-life characters they were to me. And in my doc work I had always been interested in economic cycles and how they affect us, risk and reward decisions and how we make them.

I thought that the best way to tell a story about art collecting, and the complicated way emotions and economics co-mingle in the buying and selling of art, would be to follow the path of one work across time and changing landscapes, to look at the different decisions that shaped its journey, and explore the complex, deeply personal, even idiosyncratic, way we value art. And I always knew it had to be about the Brillo Box because, as a three-dimensional object rather than a painting on the wall, there is a different level of human interaction with it, and because as one of Warhol's most controversial works, it is its own character in art history — a kind of trickster that keeps changing shapes.

So, I interviewed my parents, and then realized I had absolutely no idea how I would actually locate the Brillo Box. Then one day my mom called and said, “You should check the Christie's catalog.” The viewings for the Post War Sale had just opened and my mom saw a big ad in the Times with a Soup Can and a Lichtenstein and she thought since they had a lot of Pop Art, our Brillo Box might be there. I didn't believe that level of coincidence could even be possible, so I ignored the suggestion until she called me again, and then I finally looked at the Christie’s listing. And there was a yellow Brillo Box — the very same one that was ours, and I had found it — thanks to my mom — just in time to film the auction.

I don't think I'm alone in going back and forth between thinking Warhol was awesome but also a sham. Your thoughts?

You are definitely not alone. I am deep in the awesome camp. But I think Andy Warhol walked that line perfectly to the point that years later we are still debating him and arguing, and still going beneath that surface, and always coming up with new meanings and new ways in which he is relevant. You can still look at his work and be mesmerized by it on a visual level, while still thinking about all the different things a Marilyn, a Soup Can or a Brillo Box evokes in us.  What I always come back to with Warhol is the degree to which he was so ahead of his time, how he saw so far ahead of where we were when he was making work.

I mean, a Marilyn painting as a comment on celebrity desire at a time when the expression of that was monthly printed fan magazines, is kind of amazing to think about in comparison with the level of constant online consumption of celebrity content nowadays.  In the same way, a Brillo Box sculpture, the act of reproducing a consumer object in a different medium and presenting it in an art gallery as art, back then could have been seen as a very playful satire of consumerism. But looking at them today, through the way our consumer culture keeps folding onto itself, they feel much deeper.

The film is about more than the box, but about value and the passage of time and much more. Can you relay the main themes of the film and what you were trying to portray?

Thank you for saying that. I was both interested in portraying how time changes things, both the things themselves and the way we remember them, and the ephemeral aspects of value. Making the film was a way of navigating questions of how we cope with the fact that our past always becomes somewhat mythical and larger than life. How do we navigate the unpredictable way things change, and how do we cope with loss? Ultimately, it is a film about memory and loss but also our resilience in the face of loss. And art was such a compelling way into that theme for me, because the most important aspects of art I think are the intangible, the ways it connects us, and the way it creates bonds between people, and shared memory and history.

What's left unsaid, but intimated, are the emotions between your parents. Please discuss how you navigated what to include and exclude.

It was very important to me that the film was not inappropriately heavy handed, and I approached it with the perspective that while I was portraying a very universal and, I think, relatable theme, it was by no means a tragedy. So it was important to use as light a touch as possible and not overly comment, and just let the facts speak for themselves. Restraint was very important to me also  something I remember learning from directing actors in fiction, is that sometimes the more emotional the onscreen reaction, the less room for discovery and personal connection for the audience, so I basically applied that to editing my parents. And I also wanted to protect them and uphold their dignity, as I would for any subject I was working with. I was also very aware that personal filmmaking is a high risk endeavor — you can lose your audience in a second, or even a frame of a second, if you dwell too long on something and I really felt like the less I said and the simpler I kept the structure and narration, the more universally relatable the story would be.

Was it emotionally difficult filming your parents?

Yes. It is always hard when you are interviewing documentary subjects about topics that bring up strong emotions of sadness and loss, and exponentially so when it’s your family and knowing you are essentially asking them to look at these difficult things with you and talk about them, and then linger there while you adjust the shot or retake for audio. But this was always countered by the sense that in doing so I was also documenting something incredibly unusual and special my parents did when they were young, their taste, their ahead-of-their-time thinking about art and culture and so that sense of celebration of them was what I always came back to. My parents were always great storytellers, both have a great sense of humor, and I felt that their relatability and joy in telling stories about the acquiring and living with art would counter the wistful bittersweet and tougher moments. And it is such a collaboration between them — all the family pictures in the film except one or two that my mom shot, my father took; my mother arranged them in the family album or selected them for slide projections we used to do and all of that became the basis for the film. And my parents were so collaborative and supportive throughout.  As we developed the film with HBO, and we began moving in a more personal direction, I would check in with my mom, for example, and she would always say, "You just listen to [HBO head of documentary] Sheila [Nevins]!" Or, I showed her a cut: "Well, I really agree with Sheila."

What impact do you think your film will have on the value of your Brillo Box?

The Brillo Box has since sold again and actually for a lower price so given that and how the film is about how one never can really predict these things, I am hesitant to predict its future monetary value. But I am hopeful that the film's personal story and the exploration of the personal ways we connect with art will deepen an appreciation for both this particular art object and the intangible experiences that Warhol and all artists give us through their work, even if they haven't made it to museums or the auction block yet.