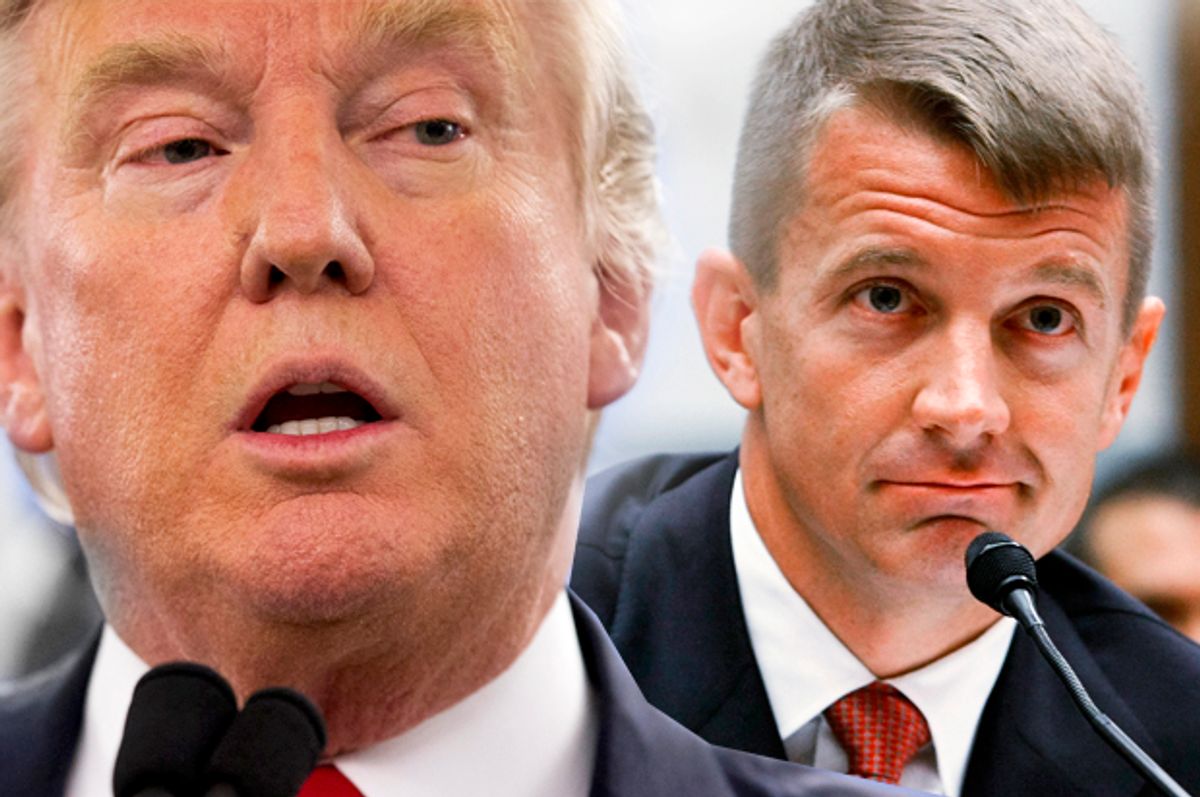 President Donald Trump has grown increasingly frustrated with the 16-year long war in Afghanistan and is now weighing a plan to privatize much of the conflict by hiring Blackwater founder Erik Prince, the brother of the Secretary of Education, Betsy DeVos.

After he sold Blackwater, which then rebranded as Academi, Prince became the chairman of Hong Kong-based Frontier Services Group, a logistics and aviation company focused on Africa and South Asia that is backed by China's state-owned CITIC Group.

Prince now wants to "restructure" the war in Afghanistan, which he described as "similar to a bankruptcy reorganization," in a USA Today op-ed on Monday.

"By aligning U.S. efforts under a presidential envoy, all strategic decisions regarding humanitarian aid, military support and intelligence become laser-focused on creating a stable, self-supporting Afghanistan," he argued.

In an interview with CNN's Erin Burnett on Monday, Prince also insisted more air support was needed, meaning his private air force, something he has been described as having an "obsession" with in the past.

"So, they need government support, they need mentor support and they need air power, all attaching to the Afghan government which doesn’t meet -- you guys like to throw the mercenary word around -- they’re not mercenary," Prince told Burnett. He also attended a meeting in the Seychelles with a Russian "fund manager," but has repeatedly downplayed it.

"There has to be a lead federal official or in this case, almost a bankruptcy trustee, that rationalizes the U.S. presence that is in charge of all policies," Prince explained. "Second, they have to stay there for a while so you have that continuity of decision making." Burnett brought up the fact that he used the term "viceroy," a colonial word for a representative of a monarch who runs a colonized state.

Prince also said on MSNBC on Tuesday that he wasn't "advocating colonization," despite comparing his services to the East India Company, an approach he's talked about, on many occasions.

Trump is said to have been receiving advisement from Prince in the shadows but is now openly contemplating Prince's proposal despite pushback from Secretary of Defense James Mattis and national security adviser H.R. McMaster, according to USA Today. However, Prince has the support from some in the White House, such as chief strategist Steve Bannon, as the two have a history together. Trump has only expressed interest in the war after he spoke with Afghanistan's President Ashraf Ghani about opportunities for American mining companies in Afghanistan in order to extract minerals.

Recently, the convictions of three former Blackwater contractors were voided and a new trial was ordered for a fourth contractor, all of whom were involved in the killing of 17 civilians at Nisour Square in Iraq in 2007.

With recent cable news appearances, Prince appears to be trying to grab the ear of the president, but it may be something he's had for quite some time already.