Tonight's top-10 list: Guests David Letterman should have on his Netflix show

Dave is back for a series of hour-long interviews. Here's who he should talk to, if he knows what's good for him 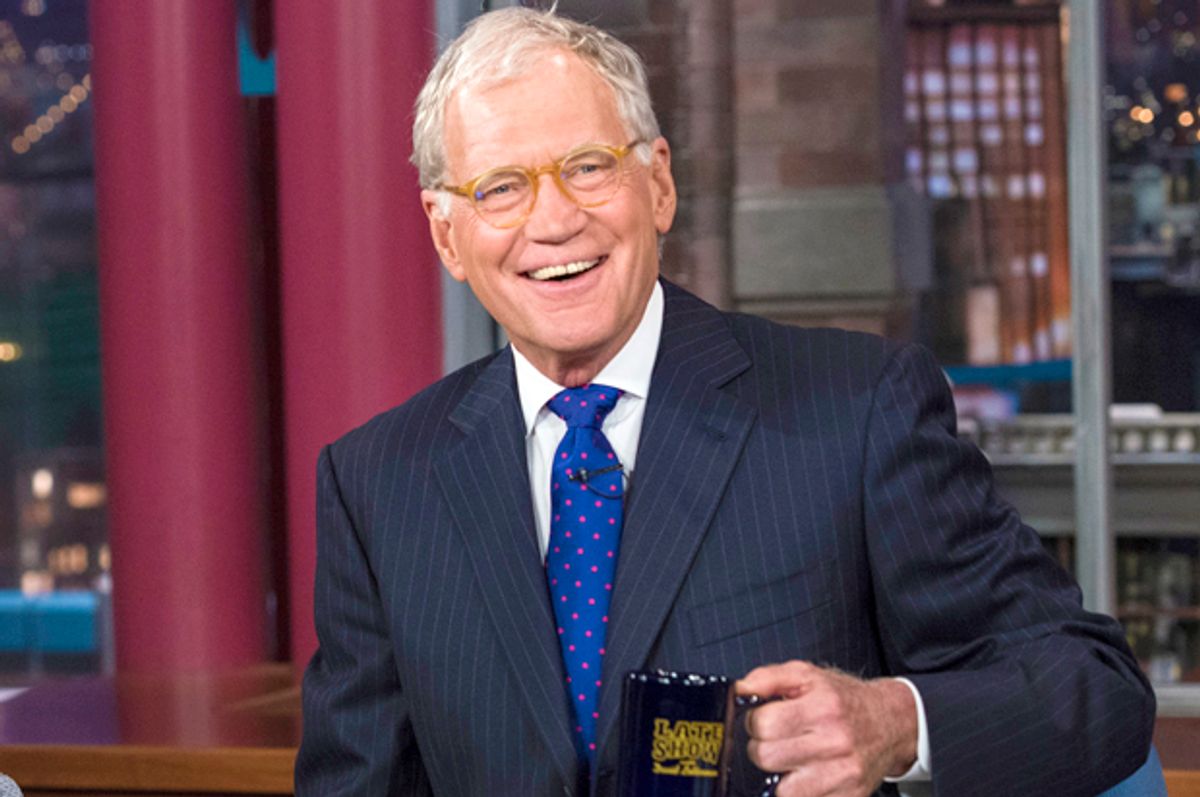 News broke earlier today that late-night king David Letterman would be returning to the small screen for a series of in-depth interviews with newsmakers on streaming service Netflix in 2018.

His first true venture into content since he left "The Late Show" in 2015, the unnamed, six-episode series will have Letterman "combining two interests for which he is renowned: in-depth conversations with extraordinary people, and in-the-field segments expressing his curiosity and humor. In each hour-long episode, Letterman will conduct a long-form conversation with a singular guest."

Sounds delightful and like a wonderful chance for viewers to again appreciate the host's rare, charming and sometimes bristly approach to interviews — one that often draws more out of subjects than they intended. It also raises the question: who will Dave interview?

While there are no details on that from Netflix and the series is no doubt early in its development, we've decided to do our best to support Letterman and offer him (and you) a list of the best news-making candidates of today for in-depth sit downs with the master of the medium. Hope you're reading, guy — you always loved top-10 lists.

UPDATE: Fast on the draw, Letterman has offered up more details about the series as  well as a couple of ideas for possible guests — including some rather unstable world leaders — to the Hollywood Reporter.

10. Mark Zuckerberg
Letterman enjoys playing the charming, loving bully, and if there's anyone who makes a fun target it's the nerdy multibillionaire behind the social-media platform we love to hate. Discussing family life, political aspirations and bashing on millenials are all in arm's reach for both in an interview that would finally, finally introduce us to the real Mark Zuckerberg.

9. Kanye West
Since his meltdown — and crypto endorsement of Donald Trump — Kanye West has been holed up working on a new album and his health. A face-to-face with a man who hosted his performances several times on "The Late Show" would be a good way to catch up with West and see if he's progressed from thirsty, thirsty self-owning troll to the artist we all know he can be.

8. Taylor Swift
Speaking of Kanye West, around the time he disapparated in a cloud of rage, so did his archenemy and pop-culture's multimillionaire victim-in-chief go into limited hiding. No one has ever been able to nail down just what smiling, privileged mean girl really is underneath her Instagram-ready visage. Dave would charm it all out of her.

7. Beyoncé and Jay-Z
Between "Lemonade" and "4:44," the husband-and-wife superstars have become necessary black voices and opened up about their troubled marriage. And, yet, no one has really gotten under the hood and plumbed the depth of those revelations in a shared, televised interview. Funny and often humane, Dave could do it.

6. Mike Pence
On the topic of plumbing uncharted depths, what do we really know about our smirking vice president outside of what his mannered, managed public appearance has given us? Fellow Hoosier Letterman could start off easy, maybe gabbing about family and basketball, and then pivot to questions of sexism and LGBTQ rights in his distinctive manner.

5. Oprah Winfrey
After a couple decades of bad blood, the two quashed their beef late in Letterman's CBS run. With both of them leaving their shows, and she branching out into a revived acting career, it seems just the right moment for the pals to reconnect, talk about the changing media landscape, discuss the struggles of black entertainers and make each other giggle.

4. Barack Obama
Remember that guy? Whatever happened to that guy? Honestly though, 40 minutes or so of these two intelligent, funny gentlemen talking about the state of the world, the failures of Trump and how we can fix this nation and planet of ours couldn't come soon enough.

3. The Mooch
Anthony Scaramucci was abjectly terrifying in his brief, brief stint as incoming White House communications director. Off the podium, however, he is an objectively charming — if fundamentally odious — thing to behold. Imagine Letterman prying him on that phone call, on his fashion sense and on his turn from centrist to Trump apostle. Pure gold.

2. Hillary Clinton
Clinton never seemed more human then when a comedian was disarming her. Certainly, she had those moment with Letterman. It's hard to think of anyone better to help her unpack and explain the trauma of losing to Trump while also getting her to own up to her own failures in a funny, biting way.

And the number-one guest David Letterman should have on his new Netflix show . . .

1. Bill Murray
It's going to happen, and why shouldn't it? Every time these two bozos meet up, it's comfort food for all us weirdos struggling through this hard, hard world.