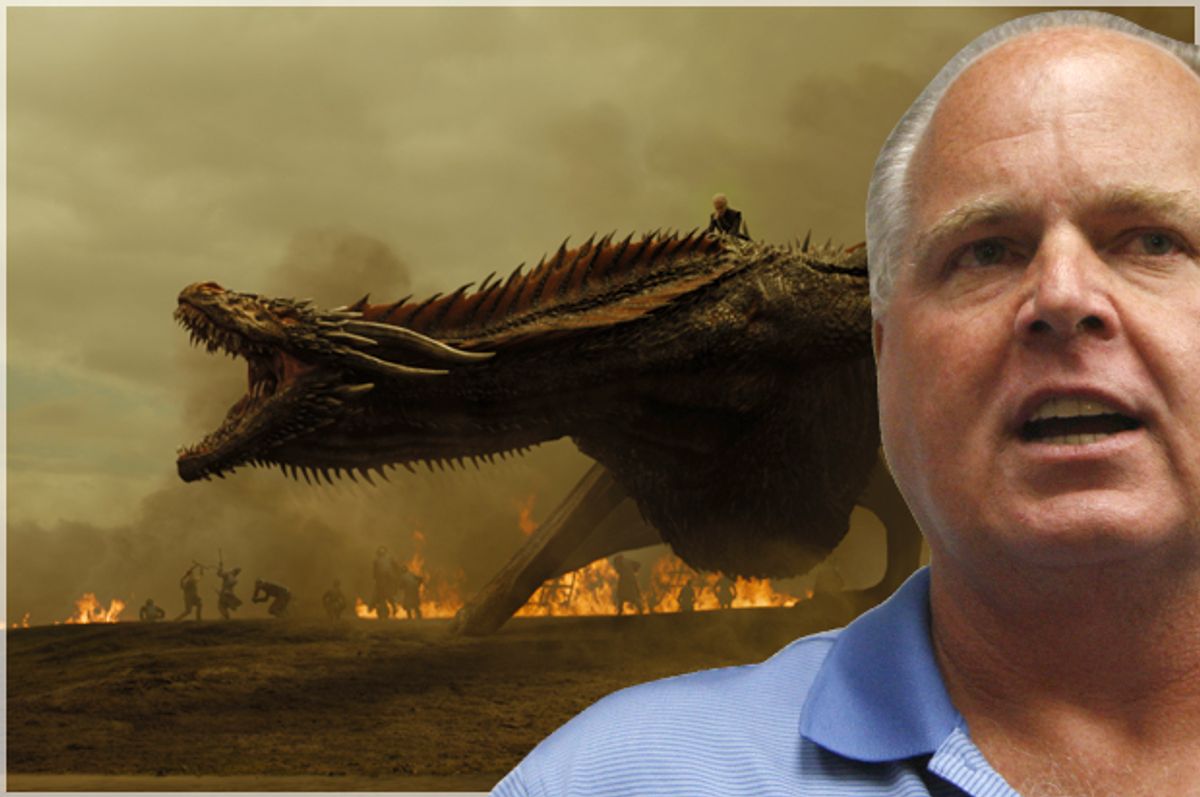 Rush Limbaugh, who unaccountably remains America’s most popular right-wing blowhard, has something he’d like you to know about those darn millennials. And it has nothing to do with those kids getting off his lawn.

No, it's their obsession with “Game of Thrones” he's all in a froth about.

During one of his rants on Monday, Limbaugh declared that the latest generation of young American adults is so disconnected from reality that they talk about the characters and events on HBO’s dragons-and-ice-zombies fantasy series as though they’re as real as baseball and football players.

"These are not characters," he bleated. "These are actual people to them, 'cause it's on a screen. In this case it's TV or their iPad or their phone, whatever they’re watching. It's people on a screen and that’s how they communicate with people, and the characters take on a reality component. It’s got me wondering about it."

Limbaugh’s rant against young Americans and their apparent disconnect with reality makes (just a little bit of) sense when you consider that they’re one of the demographic least likely to be fans of his show, much less agree with him on anything.

American millennials, defined roughly as people born in the U.S. between 1980 and 2000, tend support of LGBT rights, lean left, favor gun control measures and are more ethnically and racially diverse. And they now number more than the population of aging white male Baby Boomers from whom Limbaugh draws most of his support.

At 66, Limbaugh may be throwing in the towel at any attempt to garner a younger audience, choosing instead get his crusty audience of rapidly aging "dittoheads" to nod in agreement about everything that's wrong with the kids these days.

But in one sense, Limbaugh’s point carries some weight. Wait for it.

"[T]here are more and more of these stories about young people who have grown up with the internet and grown up with a screen, an iPod Touch or an iPhone or an iPad that they have withdrawn from society, that they do not meet people personally," he said. "They’re isolated and their entire lives are spent with their phones, essentially, and however they communicate with people on their phones."

Now, Rush might be exaggerating the isolation of young adults in today’s society (and the popularity of the iPod Touch). Yet, according to Jean Twenge, a professor of psychology at San Diego State University, who coined the term "iGen" — one Limbaugh used during his Monday screed — kids are indeed putting themselves at risk by spending too much time online.

In an article published in the latest issue of the Atlantic, Twenge argues that iGen children and young adults born between 1995 and 2012 are facing psychological problems linked to how much time they spend on social media instead of interacting with others face-to-face.

"It's not an exaggeration to describe iGen as being on the brink of the worst mental health crisis in decades," Twenge wrote. She warned that iGeners are more likely than young people a decade ago to say that they're anxious or harbor symptoms of depression. They're also more likely to talk about or attempt suicide. "Across the board, there's a really consistent trend with mental health issues increasing among teens," Twenge said in an interview Monday on NPR.

It's a somewhat controversial article and position — does talking online cause more mental problems, or does it simply make teens more likely to admit they have them? — but they seem to be ones Limbaugh is aware of and has worked into his most recent assault on youngins. As said, he even dropping the term Tenge's "iGen" term into his Monday rant.

That's not to say Rush is particularly concerned with the welfare of kids these days. After all, they believe such nonsense: dragons, giants, magic, global warming, basic human decency. What's the world coming to?