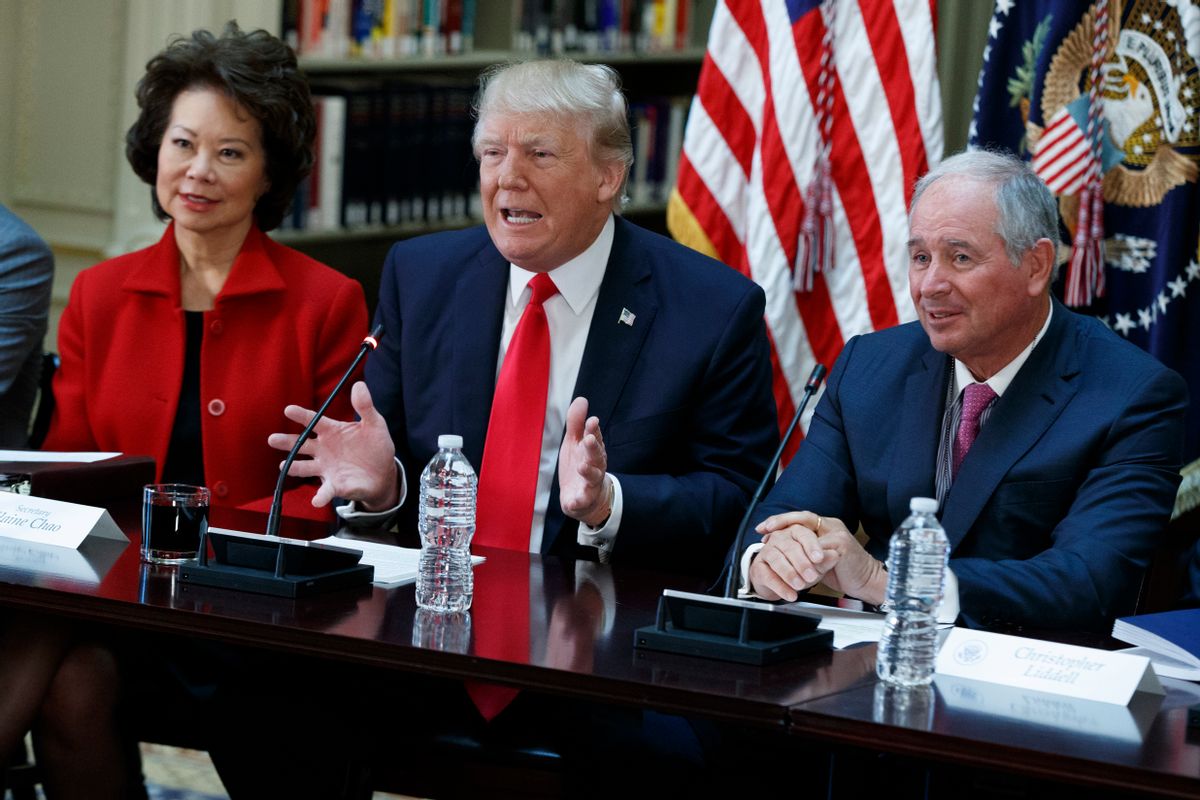 This article was co-published with The New York Times.

One appointee had previously lobbied the department on behalf of American Airlines. Another held executive roles for several electric and hybrid car companies regulated by the department. A third was a lawyer who represented United Airlines in regulatory matters.

The three appointees have been identified by ProPublica and The New York Times in a continuing effort to track members of the deregulation teams. The appointments, previously unreported, follow a pattern identified by the two news organizations: By and large, the Trump administration has stacked the teams with political appointees, some of whom may be reviewing rules their former employers sought to weaken or kill.

A full vetting of industry connections has been difficult because some agencies have declined to provide information about the appointees — not even their names.

Several federal agencies have not yet released the names of people serving on deregulation task forces. We need your help finding them and figuring out what they’re doing.

If you know anything about these task forces, contact us at taskforce@propublica.org or via Signal at 213-271-7217. See who we know about and who we don’t.

The lack of transparency has concerned several top Democratic members of Congress who serve on committees that oversee regulatory matters. In a letter to the White House on Monday, they called on the administration to release the names of all regulatory team members as well as documents relating to their potential conflicts of interest.

“It is unacceptable for federal agencies to operate in such a clandestine and unaccountable manner especially when the result could be the undoing of critical public health and safety protections,” Representatives Elijah E. Cummings of Maryland, John Conyers Jr. of Michigan, Gerald E. Connolly of Virginia and David Cicilline of Rhode Island wrote in the letter.

The congressmen cited a recent investigation by ProPublica and The New York Times revealing that members of the deregulation teams have included lawyers who represented businesses in cases against government regulators, staff members of political dark money groups and employees of industry-funded organizations opposed to environmental rules.

Since the publication of that investigation last month, the news organizations have identified more than a dozen other appointees through interviews, public records and reader tips — including the three appointees to the deregulation team at the Transportation Department.

In all, there are now 85 known current and former team members, including 34 with potential conflicts. At least two of the appointees may be positioned to profit if certain regulations are undone and at least four were registered to lobby the agencies they now work for.

One Transportation appointee, Daniel Elwell, was previously a top lobbyist for American Airlines who sought to influence the Transportation Department. He also held executive positions with the Aerospace Industries Association, a trade group representing aerospace and defense companies, and Airlines for America, a trade association for major airlines.

A department spokesperson said Elwell left the deregulation team after being appointed as deputy administrator of the Federal Aviation Administration in June.

The department has oversight over some rules affecting electric cars. For example, this year it delayed new safety requirements that would have forced the vehicles, which are normally quiet, to make a minimum amount of noise to catch the attention of nearby pedestrians.

A third Transportation appointee, Jonathan Moss, was previously managing director of international and regulatory affairs at United Airlines. One of his top responsibilities at the airline, which is regulated by the Transportation Department, was “anticipating and responding to proposed regulations affecting United’s operations.”

Moss also served at the department during the Obama administration. An agency spokeswoman said all deregulation team members had signed agreements requiring them to recuse themselves from issues that narrowly affect recent employers.

The deregulation teams are part of Trump’s push to cut red tape across government, and they have presented a new avenue for industries to shed rules they have argued for years are hurting profits, depressing job creation and raising prices. Environmental, consumer and other liberal groups have argued that such regulations protect the public, keeping drinking water clean and roads safe, for example.

In the recent past, presidents from both parties have entered office pledging to scrutinize regulations, but Trump’s order goes further, putting a premium on cutting rules and empowering teams of political appointees who are typically less wedded to an agency’s existing guidelines.

The agencies have also been opaque about their deregulation teams.

The Justice Department has released the names of only two appointees currently working on its team. In an email exchange, a spokesman, Ian Prior, said he could not provide additional names because “the Task Force is made up of components, not particular employees.”

“A component may have multiple employees assisting with the work,” he added.

Asked if he could name any of those employees, he responded, “Decline.”

The Defense Department and the Department of Homeland Security provided only the titles for most appointees to their review teams, not the names.

In their letter to the White House, the Democratic lawmakers suggested that withholding names could violate the Freedom of Information Act.

“These Task Forces must have an effective and transparent guard against conflicts of interest, especially those in which industry lobbyists seek to overturn environmental and health protections for financial gain,” wrote the lawmakers, who are the ranking Democrats on the House’s Committee on Oversight and Government Reform; Committee on the Judiciary; Subcommittee on Government Operations; and Subcommittee on Regulatory Reform, Commercial and Antitrust Law.

“It appears,” the letter continued, “that the current Task Forces are already failing on this front, and instead are actively hiding their members and their meetings from public view.”