Looking forward to broadcast TV's newest shows? You may want to curb that enthusiasm... 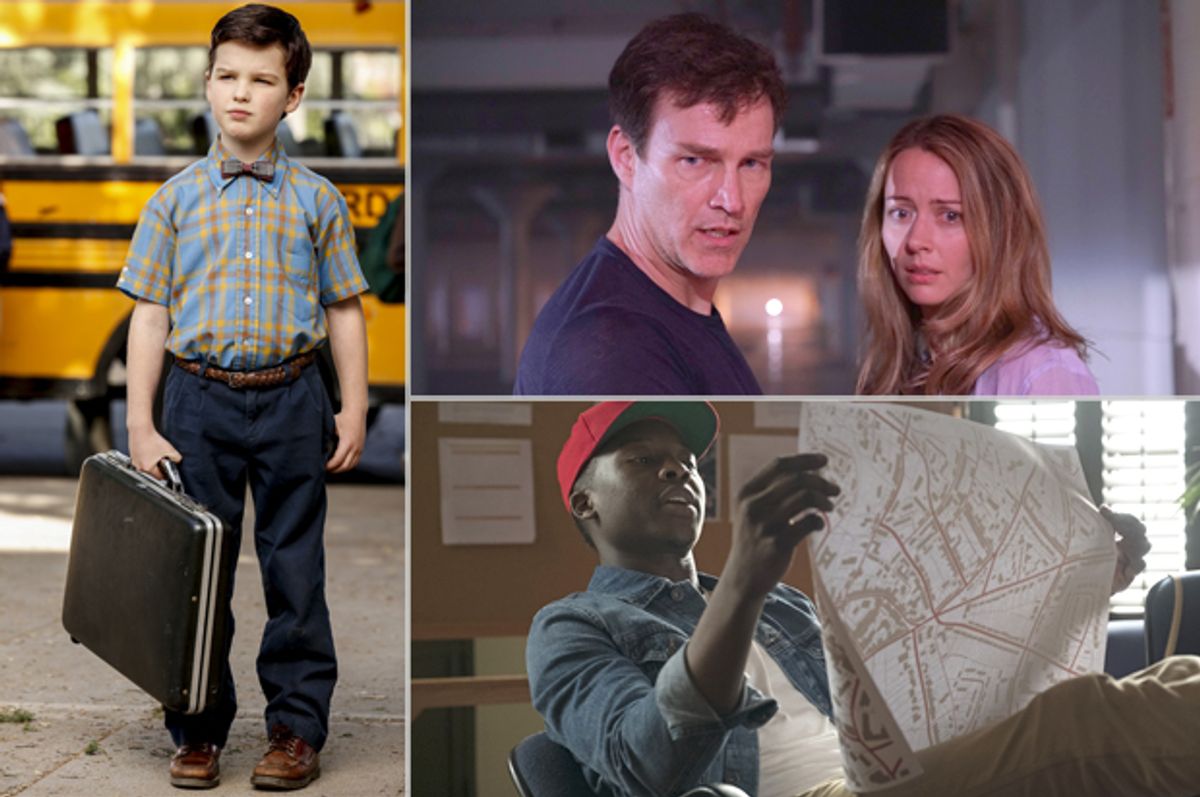 Officially the broadcast fall TV season begin the week after the Emmys telecast, and for the reader’s reference that airs Sunday, September 17 on CBS. I have to make that qualification – “officially” — because a number of series for which viewers harbor affection and enthusiasm premiere before that date. But those series run on cable or streaming services, among them “BoJack Horseman” (debuting Friday, Sept. 8 on Netflix), “Outlander” (Sunday, Sept. 10 on Starz) and “Broad City” (Wednesday, Sept. 13 on Comedy Central).

In truth, programming television schedules has been a true year-round endeavor for more than a decade, though efforts to eliminate the concept of seasons have been going on for even longer that this. Regardless, the surge of series releases via various channels and services (but mainly on Netflix, let’s call it like we see it) makes the concept of season a bit nebulous. Americans will continue to follow the rhythms of fall television regardless of the industry’s evolution; it coincides with the beginning of the school year, for one thing, and besides, it’s a convenient way to keep track of when established series return.

And for ABC, NBC, CBS, Fox and The CW, the series worth anticipating aren’t the new crop but the established winners. ABC has the final season of “Scandal” coming up. CBS and its slew of procedurals keep middle-America happy, as does its reliable comedy veterans headed, of course, by “The Big Bang Theory.”

Fox keeps chugging along with “Empire.” The CW has critically-acclaimed awards bait in “My Crazy Ex-Girlfriend” and “Jane the Virgin” while continuing to please fans of the D.C. comic book universe in the face of a tsunami of Marvel-related titles across television, including on ABC, Fox and Netflix. NBC maintains its path of resurgence via Dick Wolf’s “Chicago” branded procedurals and the multiple-Emmy Award nominated “This Is Us.”

In other words, there’s plenty of sitcoms and dramas that are known factors and that somehow survived the prior season that proved difficult for any new contenders to cut through the static created by a loud and vicious election campaign cycle and everything that followed in its wake.

At least the new fall shows won’t have to struggle against that soul-sucking energy. Oh, we still feel like the world’s events are slowing draining our life force out of our pores. We’ve simply gotten used to it.

A greater problem facing series debuting in the 2017-2018 season is that they’re not particularly good. “Spectacularly mediocre” is the most apt way to describe this new fall slate, host to a number of shows that are long on flash and short on feeling.

To wit, both ABC and Fox are rolling out new Marvel projects — “Inhumans” on ABC, “The Gifted” on Fox — short on quality and substance. “Inhumans” is getting an early debut in IMAX theaters on Sept. 1, which probably isn’t the wisest moves given how ridiculously amateurish it looks in its current state.

Marvel’s head of television Jeph Loeb is well aware that the pilot resembles a flaming bin of trash because when a reporter politely asked him how he felt about it, he testily replied, "I can tell you that it was written on the material that you were given that the show that you have seen is not the finished product. If you’re asking me whether or not it was done, it’s not. So to be perfectly honest, I don’t understand your question."

NBC’s grand move consists of bringing back “Will & Grace” and underscoring its belief that audiences will love, love, love these new episodes of a show that’s been dead for a decade by greenlighting a second season before the first premieres. The comedy’s debut . . . return? . . . comes before ABC, the new home of Ryan Seacrest, raises "American Idol" from its gilded grave.

Fox is countering “Idol” with its own singing competition tentatively titled “The Four,” which may or may not resemble “The Voice” in some respects. With music stars launching and building their careers on YouTube these days a person may rightly wonder what value these talent competitions have in today’s marketplace anyway.

Network television has long been an easy target, and slapping them around doesn’t provide much of an upper body workout relative to the sundry complex problems plaguing the industry at large. Instead here are five new shows that could actually be entertaining, but honestly, there are no clear guarantees of this.

As stated in our previous story on cable’s better fall slate, in-depth reviews of many if not all of these titles will be published closer to their premieres.

“Young Sheldon.” Premieres 8:30 p.m. Monday, September 25 on CBS. Jim Parsons narrates this single camera nostalgia fest that leads us through the life and times of his younger self, played by the precocious Iain Armitage. The series begins with nine-year-old Sheldon entering high school in his small Texas town, and its charming portrait of the familiar character’s youth as well as his relationship with his mother (Zoe Perry) gives the series a warmth that’s reminiscent of “The Wonder Years.”

“Young Sheldon” also is the first single-camera comedy Chuck Lorre has produced. “It’s more intimate. The pacing, obviously, is very different,” he said at a press conference for the show. “The actors aren’t having to hold for laughs. They’re not playing to the proscenium. They’re not playing out. They’re working with one another. You know, a four camera show is played like a theatrical presentation. They’re playing to the audience, and it changes the tone and the pitch and the pacing."

“The Gifted.”  Premieres 9 p.m. Monday, October 2 on Fox.  You may have noticed that in the above spate of abuse for “Inhumans,” I did not mention Fox’s series, set within the “X-Men” universe. That’s because it’s not terrible. The pilot’s not particularly great either, but it has a decent cast in Stephen Moyer (“True Blood”), Jamie Chung (“Gotham”) and Amy Acker (“Angel,” “Person of Interest”) and a talented showrunner in Matt Nix, the brains behind USA action hit “Burn Notice.”

Bryan Singer directed pilot, and while that doesn’t save it from its stumbles, at least it looks pretty good.  And remember, many decent series took lessons from launching with middling pilots; this one could actually recover from its shaky launch.

“The Mayor.” Premieres 9:30 p.m. Tuesday, October 3 on ABC. This is one of the series that was touted as part the Trump voter’s influence on fall TV, but it flouts the preconceptions of what such a series might look like. The premise places a young rapper Courtney Rose (newcomer Brandon Micheal Hall) running for mayor of his small California hometown as a publicity stunt and actually winning, much to his horror.

In contrast to what’s unspooling on the national stage in the real world, Courtney’s family is actually an asset to his political career: his mother Dina Rose (Yvette Nicole Brown) keeps him on the right track, and his competitor’s campaign manager (Lea Michele) steps into his camp to help him succeed.

Executive producer Jeremy Bronson spent seven and a half years as a producer for “Hardball with Chris Matthews.” Based on his experience with national politics, “I knew that I wanted to do some show that tackled a community, people coming together in a nonpartisan way to figure out if we all fundamentally care about improving the lot of our people, what can we do?” he said to critics.

“Now, obviously, given sort of the politics of the past year, it’s helped everybody, I think. I should say everybody is a lot more focused on what they can do, what we could all do, to sort of improve the country, improve our situations. So it’s given us a lot of inspiration for the show.”

“Dynasty.” Premieres 9 p.m. Wednesday, October 11 on The CW. Speaking of reboots and era-appropriate programming, “Gossip Girl” executive producers Josh Schwartz and Stephanie Savage have rekindled one of the most opulent and tacky ‘80s primetime soaps with a slew of young actors in re-imagined versions of familiar roles, and with “Melrose Place” star Grant Show cast in the role of Blake Carrington. General consensus is that this new “Dynasty might qualify as so-awful-it’s-brilliant, although the pilot itself wasn’t warmly received by most. That said, one thing many viewers will be amazed by is how kind the years have been to Show (to quote a very prominent critic in the room, “Grant Show can still get it”) which may provide enough of a reason to at least sample this bad candy. And maybe that's the best that a network can expect in this binge-crazed world of ours.