Trump apparently supports anonymous leaks if they favor his agenda 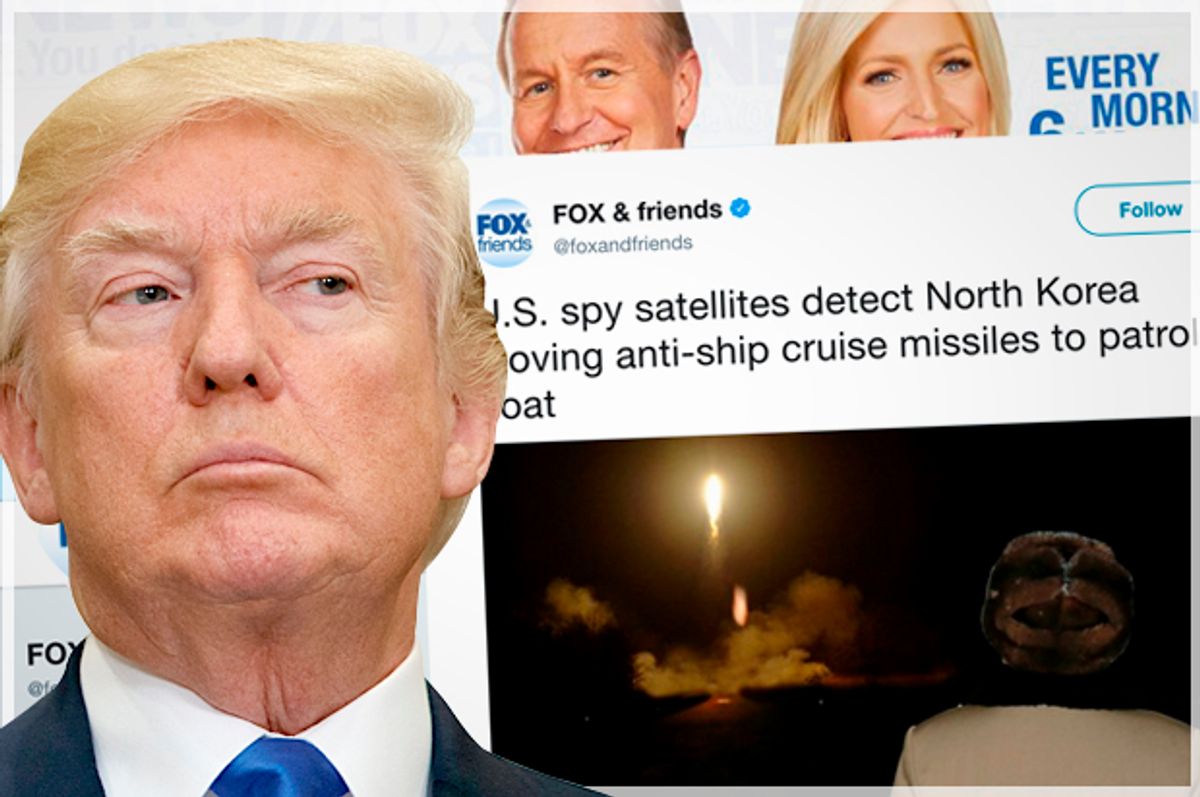 President Donald Trump has been very clear about his disdain for leaks, many of which have been politically damaging or embarrassing to him. But apparently, the president is fine with leaks so long as they conjoin with policies he is promoting.

Not only is he fine with them, he’s willing to share them on his Twitter feed as a tacit confirmation of the anonymous information. Trump followed the re-tweet with his own message calling on countries to be “tough & decisive” against the “dangers of North Korea.”

The “Fox & Friends” report cited anonymous sources from the U.S. intelligence community, but instead of condemning the anonymous leak, the president used it to drum up support for his hawkish stance against the nuclear rogue state. Earlier this month, Trump said he was willing to go to war with the nuclear state to end Pyongyang’s efforts to develop missiles that could strike U.S. cities.

Leaking information about the U.S. capability to detect military maneuvers from North Korea could fit in the category of “sensitive government information,” because it reveals U.S. spying capabilities against an enemy state.

At the behest of the president, U.S. Attorney General Jeff Sessions announced last week that his Department of Justice would be more aggressive in rooting out leakers, pledging not only to prosecute them but to go after journalists that use leaked information in their articles.

“No one is entitled to surreptitiously fight their battles in the media by revealing sensitive government information,” Sessions said in an official statement.

If the allegations in the “Fox & Friends” article are true, it marks an escalation of aggression. North Korean anti-ship missiles in the Sea of Japan would suggest a threat to U.S. naval forces operating in the region, but they could also be defensive posturing on the part of Pyongyang.

Ambassador to the United Nations Nikki Haley lashed out at classified leaks in a Fox News story during an interview on Fox News Tuesday morning, saying it is “incredibly dangerous” that it was reported, even after Trump tweeted out the story.

“I don’t know what’s going on, but I will tell you it’s incredibly dangerous when things get out to the press like that,” she said.“Wherever the leaks are coming from, if someone thinks they’re getting power and fame from it, all you're doing is putting Americans in danger.”