A terrifying axis of idiocy: Kim Jong-un baits Trump, who falls for it 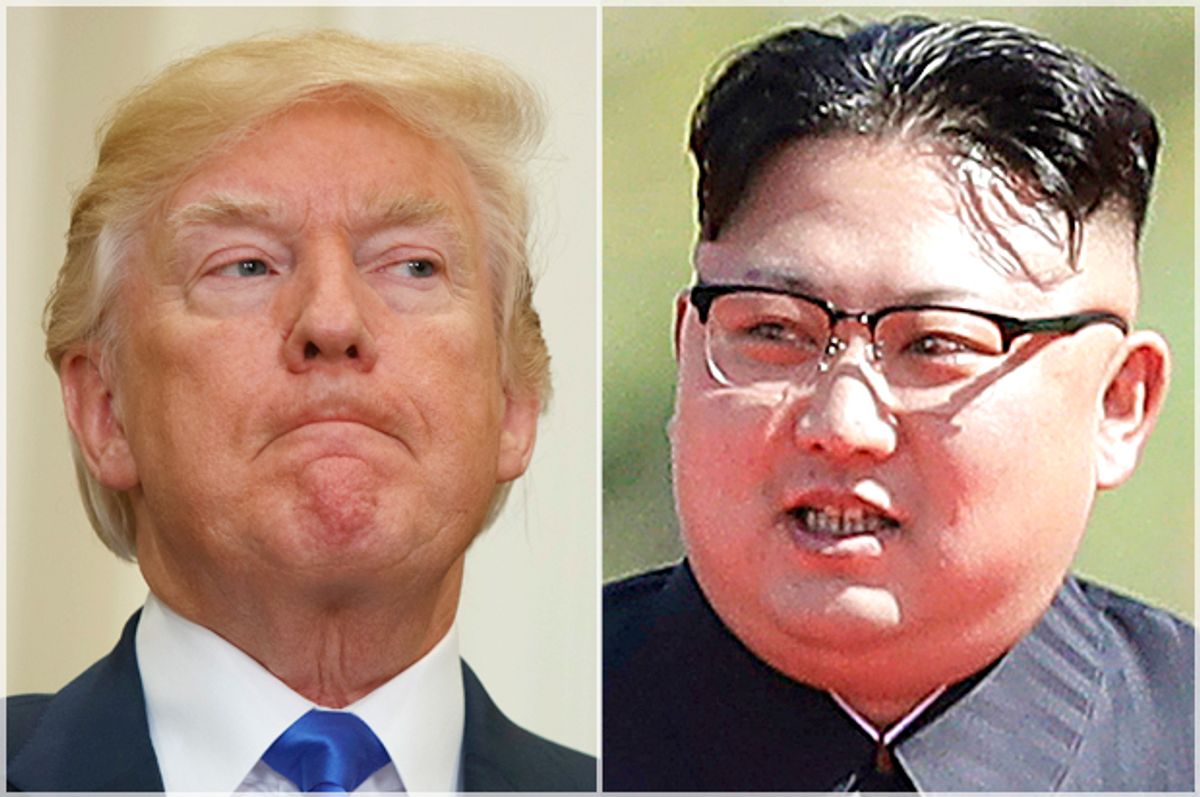 When Rust Belt voters stepped out of their voting booths after pulling the lever for then-candidate Donald Trump, I’d wager they never fully considered what those votes would actually precipitate. They had some ideas, and they were warned about what Trump might do if he actually won, but that’s the thing: I don’t think many Trump voters actually thought he’d win, which is why they frivolously cast ballots for the ungainly Republican. So it’s unlikely that a solid chunk of Trump’s supporters wanted him to, say, allow corporations to dump pollution in the water supplies in coal producing states or thwart physically abused seniors from suing their assisted living facilities.

And one thing I’m almost sure they didn’t want is a second war with North Korea, this time with its erratic leader, Kim Jong-un, threatening a nuclear strike against the American mainland. I’m not sure Trump’s voters even processed our own erratic leader’s infatuation with nuclear weapons before voting for him (more on this presently). Doesn’t seem like it. Any reasonable human knows that preemptively attacking the Democratic People's Republic of Korea (as Kim's state is officially known) would spell catastrophe for South Korea, Japan and maybe even the American mainland. But on Tuesday, it appeared as though the United States and the DPRK moved one colossal step closer to just such an endgame.

Of course, it’d be crazy not to blame Kim and his unpredictable bellicosity and increasingly provocative missile tests in all of this. Obviously. But we also have to look at our own Mad King as well, and we have no choice but to wonder whether Pyongyang accelerated its nuclear weapons capabilities as a means of baiting our current president, whose weakness, incompetence and knee-jerk decision-making have been abundantly telegraphed not just to North Korea, but indeed to all of America’s potential overseas enemies.

Last December, during the presidential transition, I warned about the possibility that a “foreign power, be it a nation-state or a terrorist group, [might] test Trump on his unearned bravado and unprompted nuclear saber-rattling.” One of my biggest worries about Trump ascending to the White House stemmed from the Cuban Missile Crisis test. How would Trump have handled those 13 days in 1962 when the United States and the Soviet Union careened toward nuclear war, only to back away at the last minute? It’s a question we should still be asking today.

Indeed, throughout the campaign and into the transition, Trump’s curiosity about using nuclear weapons -- a terrifying thing in itself -- became a regular feature in covering the future president. You might recall how Trump stupidly and recklessly wondered out loud why we never use our nuclear weapons. To make matters worse, he added a layer of idiocy to his nuke-curious posture when he revealed during a GOP debate that he didn’t know what the “nuclear triad” was. In response to Hugh Hewitt’s question, Trump seriously replied, “To me, I think nuclear — the power, the devastation is very important to me.” Huh? Yeah, this is the doofus who might become the first president since Harry Truman to launch a nuclear weapon.

So, naturally, when the leader of the big superpower on the block is this easily baited, and this profoundly uneducated about the ethics and responsibilities inherent in possessing a vast nuclear arsenal, are our enemies more or less likely to test this president? The only answer is “more likely,” and that's precisely what Kim Jong-un is doing right now.

On Tuesday, the president who a year ago didn’t understand the three primary launch platforms for our nuclear arsenal said this: “North Korea best not make any more threats to the United States. They will be met with fire and fury like the world has never seen.” Trump’s apocalyptic remarks followed a report indicating that the DPRK now had the capability to deploy a miniaturized warhead on a medium-range missile. If this is Trump’s version of a line in the sand, he’s risking a hell of a lot. If Pyongyang steps over that line, what does he do? Does he make good on his threat, or does he back off? The former would precipitate certain warfare and potentially hundreds of thousands of dead civilians on the Korean peninsula alone. The latter would make Trump appear even weaker than he already is.

In the Cuban Missile Crisis test, Trump might have just failed in his first move, right out of the gate.

And then Pyongyang responded -- not with an attack or an escalation, but with a severe threat of a missile attack against the U.S. territory of Guam in the Pacific Ocean, which will apparently be "put into practice in a multi-current and consecutive way any moment." If this wasn’t more empty warmongering from the North Korean regime and turns out to be true, by the time this article appears the world could look significantly different than it does as I write these words -- 9/10 versus 9/11 different, or worse. At the very least, we’re talking about a blinking contest between two heavily armed adversaries, neither of whom has shown any aptitude for thoughtfulness, restraint or strategic thinking. Both leaders are almost equally matched, in fact, in one area: strength of lunacy.

There’s no way of knowing exactly where all this will lead. Who will strike first, if at all? Will cooler heads win the day? Or will Trump continue to bungle and botch his way through this crisis with the same flailing, eternal-now blurts as usual? If we emerge from this standoff with North Korea unscathed, voters have an old lesson to learn one more time: We need to take Election Day decisions a little more seriously in the future so we never again confront a nuclear-capable enemy with a leader who’s functionally illiterate and who sets his policies based on what Steve Doocy and Brian Kilmeade giggle about on "Fox & Friends." Choosing national leaders isn’t a game or a whimsical matter. We shouldn’t be casting our votes just to troll people we don't like on Facebook. And now we're learning why.