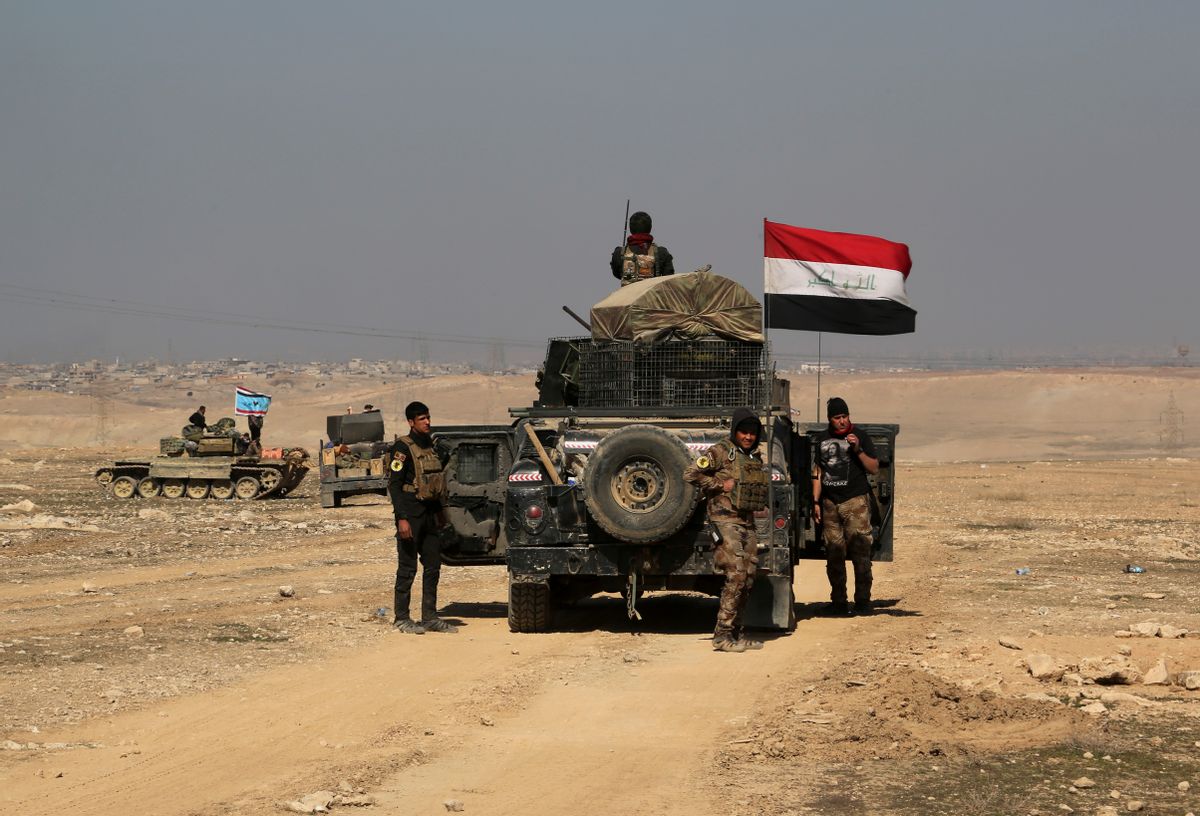 Iraqi special forces advance towards the western side of Mosul, Iraq, Thursday, Feb. 23, 2017. The advance comes as part of a major assault that started five days earlier to drive Islamic State militants from the western half of Mosul, Iraq's second-largest city. (AP Photo/ Khalid Mohammed) (AP)
--

Iraq, once the cradle of civilization, has and continues to experience one of the most horrific violent conflicts in modern history that defies any semblance of civilized humanity.

It is hard to imagine the mammoth death and destruction that has been inflicted on the Iraqi people by foreign powers and domestic terrorism.

Yet, the country can still overcome the horrors of the past 14 years, provided its leaders correctly reassess the changing regional and domestic dynamics and agree to allow all Iraqis, regardless of their sect and cultural orientation, to choose their own political and civil structure.

Nearly 225,000 persons have become refugees, and 3.1 million are internally displaced. The destruction of infrastructure and socio-economic dislocation created widespread hunger and disease, especially among the tens of thousands of children who are vulnerable and suffering from malnutrition.

All this human and material devastation culminated with the rise of ISIS that has ravaged the country, while the internal indiscriminate terrorism between Sunnis and Shiites continues unabated.

This tragedy is unfolding as the Iraqi government and people are still languishing in the shadow of death and ruin, wandering about the political wilderness in search of ways to piece the country back together in the wake of ISIS’ eventual defeat. These efforts, however, may well prove to be an exercise in futility.

The Abadi government ignores the fact that the Iraqi Kurds are on the verge of establishing their own independent state following the upcoming mid-September referendum, and that the Sunnis will reject the status quo ante and never again subjugate themselves to the whims of a Shiite government in Baghdad.

Having suffered intense discrimination, oppression, and wanton violence perpetrated against them, especially during the eight years of the Maliki government, the Sunni community has long since concluded that their future wellbeing depends on their will and ability to govern themselves.

They are determined to follow the footsteps of their Kurdish counterparts by establishing autonomous rule as a prerequisite to ending Sunni-Shiite bloodshed.

The carnage between the two sides that started immediately following the 2003 Iraq war continues to rage, claiming the lives of hundreds each week. It is unlikely to abate as long as:

1. The Iraqi government and outside powers, including the United States, are still absorbed by the illusion of maintaining Iraq’s geographical unity.

2. Shiite Iran and Sunni Saudi Arabia are waging a proxy war in Iraq to secure their geostrategic interests to become the region’s hegemon.

The legacy of ISIS

In many ways, the rise of ISIS and its control over much of the Sunnis’ three provinces further deepens the Sunnis’ resolve to fight for their independence from any internal or external power.

In addition to the egregious mistreatment they have suffered under the Maliki government, the Sunnis endured the brunt of ISIS’ brutality and horrific ruling methods.

Children were affected the most, as they were witnessing the unspeakable cruelty of ISIS in real time. Children were recruited to commit the most heinous crimes; hundreds of thousands have been traumatized as they were forced to watch beheadings and the gruesome treatment of innocent bystanders “suspected” of committing petty crimes.

The liberation of Mosul offers a new beginning to build a promising future for Iraq. In that regard, I maintain that Iraq’s strength rests on the three main sects becoming first politically independent from one another.

The central government must support the establishment of an independent Sunni entity and amend the constitution to reflect the new political and territorial divisions.

Internally, the Iraqi government must address the endemic corruption which consumes nearly one third of the country’s revenue, establish a fair and impartial judiciary, engage in economic development, and refrain from infringing on the Kurds’ and Sunnis’ internal or external affairs as they put their own houses in order.

Given that the Sunnis’ three provinces have no oil, their economic development depends on securing their share of revenue by passing the long-anticipated oil law.

In addition to that, the new Sunni entity would need the financial support from the Gulf states, the United States and the European Union to become a viable entity.

The central Shiite-led government in Baghdad must not hold them hostage by denying them their legitimate share, thereby preventing them from establishing their own state. This would be the recipe for continuing bloodshed and destruction that will only deepen the gulf between them, to the detriment of the country’s future.

The benefits of this roadmap are enormous, as it will first impact directly on the future stability of Iraq, and bring an end to the proxy war between Saudi Arabia and Iran as they come to realize that neither can change the reality of Sunni-Shiite coexistence, both in Iraq itself and as neighbors.

This arrangement would also mitigate the Iranian threat, which the Gulf states and Israel view as the source of regional tension and violent conflict.

Moreover, it would significantly reduce militant activities, enhance regional security, and start a process of peace and reconciliation to end the revenge and retribution that would inevitably ensue, given the horrifying violence that they have inflicted on one another for the past fourteen years.

It is only when the Sunnis establish their own entity and build the infrastructure of an independent state will they feel empowered and confident to work closely with the Kurds and the Shiites as equals, which will pave the way for a functioning confederation between them at a later date.

The role of the United States at this early stage is critically important. The United States must support the establishment of an independent Sunni entity, maintain residual forces throughout the transitional period, train and equip security personnel, rein in extremist groups, and guide the Sunnis in the development of a political structure consistent with their beliefs, culture and aspirations.

To be sure, the death and destruction from which the Iraqis have suffered during the past 14 years must come to an end.

Children have been affected the most; they have suffered from malnutrition, disease, and dislocation, with enduring psychological scars that will last a lifetime. Tens of thousands have been killed, and as many became orphaned, not knowing what happened to them and why.